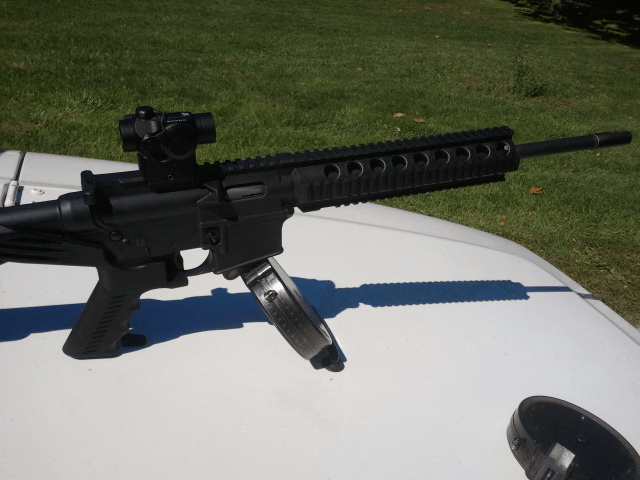 Good Morning, I got a couple new toys to play with yesterday. If you read a recent post of mine about the Smith MP-22 and full auto fun with the Slidefire stock then you can understand why you might want a couple of these. Those 25 round factory mags are empty in a blink of an eye. It takes at least 2 blinks for these drums to be empty. They double your fun and ammo expense as well. So let’s go over the Black Dog Machine 50 round 22LR drum magazines. 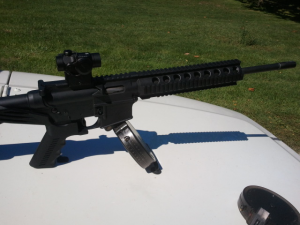 Initial Impressions: Out of the box I thought they seemed a tad bit fragile I guess is a good word. I don’t mean junky I just mean that I wouldn’t drop them and toss them around like I do metal mags. This is a magazine I would exercise a bit more caution with to make sure it isn’t damaged. It’s not made for WW3 anyway obviously so just be careful with it. There’s “polymer” and then there’s “plastic”, to me plastic is something to be considered fragile. In my opinion these are plastic magazines. That’s not a black mark on them just something I feel the owner needs to accept. So take it easy on them. 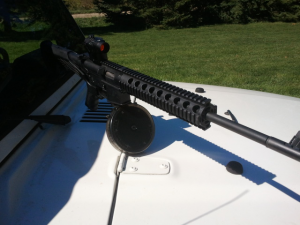 They came in a cardboard box with 2 spare rubber bands and some paperwork from Joebob Outfitters for about $61.50 a piece shipped to my door. The short and sweet owners “manual” covers everything pretty well and with nice pictures to help you understand the proper way to load, unload as well as disassemble the thing and get it back together properly. It looks to be like it might be a bit tricky to get it apart and back together right. I have not tried it yet as there is no need. When the time comes for adjustment or cleaning I will post that ordeal when I have to do it. Until then it looks to be one of those times when “it’s not broke so don’t fix it” kinda things.

Taking a moment to talk about JoeBob Outfitters. They have great prices on quite a few items. Free shipping which is always nice and they are Vet owned and ran. I tend to try to give my business to vets whenever possible. At one time or another we may have even helped each other out somewhere ya never know but I lean towards supporting my brothers and sisters in arms. Additionally they offer a MIL/LEO discount which is another reason I am fond of JoeBob. Thanks for all that! Check out joeboboutfitters.com or give them a call at 785-639-7121.

They also said that the power spring may lose tension over time and that was normal. It can be reset to the proper tension by disassembling and tightening it up a bit. That’s all fine and dandy but it gives me the impression that this is a magazine that should NOT sit loaded for extended periods of time. As a general rule most mags can remain loaded indefinitely. I don’t think I’d do that here in this case but like I said I’ll give them a call later today and update this once I have word from them. It’s not like this contraption is my HD rifle. It’s a toy for wasting 22 ammo, so no need for it to be loaded all the time anyway. Let’s go try the thing out.

Loading: I was pleasantly surprised by how easy it is to get 50 rounds in the things. I expected much worse. You simply advance the wheel inside the thing through the back with a thumb and drop in 2-3 rounds at a time. It loads beautifully and without much effort. The 25 round factory mags are actually harder on my fingers than these are. So I was happy loading them up. 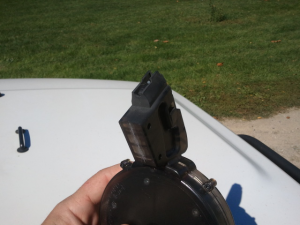 Firing: I took the Smith MP-22 and a boatload of various ammo out to the quarry for some quick testing. I fired 600 rounds. 2 drums loaded and fired out 6 times each. They work!! I had 1 jam and it was due to a bad round, the bullet came un-crimped and was almost out of the case mouth entirely. I don’t blame the mag for that. They fed smoothly and as far as I’m concerned with perfect reliability. I was quite pleased with the performance of the mag. They fire bursts fine and will keep up with full auto rates of fire out of the MP-22. All in all I’m quite pleased with them. Last, these mags are feeding in a rifle that is so disgustingly filthy it’s almost making me ashamed. ALMOST. That says something for these mags right there. They are feeding in a rifle that has nearly 8000 rds fired in one month without a cleaning. I have really put the Smith MP-22 through its paces this month and she continues to amaze me. Kudo’s to both Smith and Black Dog.

Slidefire Specifics: Read the Slidefire 22 review here and you’ll see that weight is a concern with getting the thing to go “cyclic”. After some mods I had the thing working with pretty much most high or hyper velocity ammo and factory 25 round mags. You do need the recoil though and the added weight of this magazine and 25 extra rounds was slowing things down a bit. I found that I needed to stick with fast ammo to generate enough recoil to make it work. Example would be the Federal Bulk Pack was not so good making the Slidefire do its thing compared to using the 40 grain CCI Velocitors. The Velocitors being fast and heavy for a 22 made the whole thing hum along perfectly. The Federal and its limited power was touch and go, often times requiring you to let go of the trigger so it could reset itself. Not a big deal. The mag itself works great. Just realize you will have a better experience with more powerful (more expensive) ammo than you will with the cheap stuff when trying to get the Slidefire to work in conjunction with a heavier drum magazine. 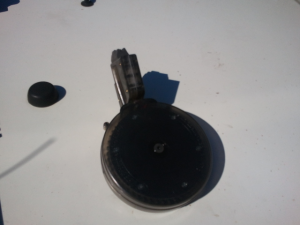 Parting Thoughts: I like metal feed lips on high-cap 22 mags. This unit does not have them. Is this going to be an issue?? I don’t know, time will tell on that one. I do think it will take a hell of a lot of shooting to wear them down though. At any rate Black Dog has all the parts available at reasonable prices for replacement of anything worn or broken so that’s really nice. You can also change towers and use the same drum in a Ruger 22 for instance! That coupled with their Lifetime Warranty makes me feel pretty good about my purchase of these mags. I am very pleased over all. They extend your “fun” another blink or 2 of your eyes when playing with Slidefire which is why I bought them. I do like and recommend these magazines. They work. Now if they would just make us a 100 round drum the same size and weight we’ll be all set!! 🙂

Update 9/20/12: I spoke with Bruce at Black Dog Machine regarding leaving the mags loaded for extended periods of time. He said he has left his loaded and they have performed without any trouble. BUT.. He did not recommend leaving them loaded. I agree with that. It probably won’t bother them but seeings how these are more fun toys than anything else why would ya? I won’t. My advice, leave them empty.

Update 10/4/12: I received a nice email back from Racheal at Black Dog Machine, she seems like a doll and was telling me that the company is named after “Badger” an old black lab who is alive and well at 15. I had asked about that specifically because anybody who knows me knows how special old “Jack” my old black lab was to me. I miss my old shooting partner everytime I go. Anyway, Racheal got back to me quickly and I suspect if I ever do have trouble this is a company that will be there for you. Thanks Black Dog, nice drums!