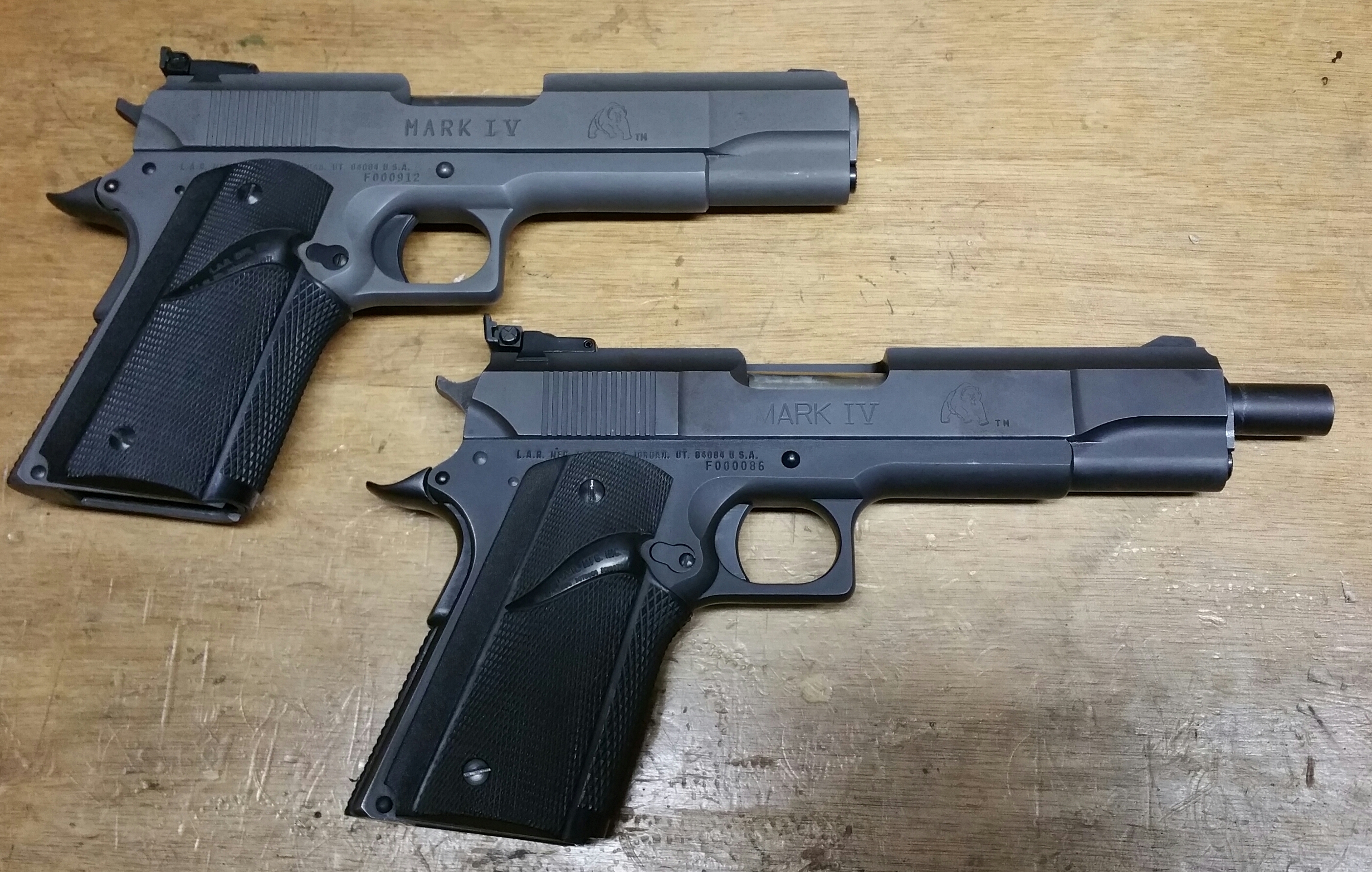 I landed a 2nd LAR Grizzly. I wrote a piece on my first one and I absolutely love it. A man named Jerry Adams commented on my last LAR Grizzly piece saying he wanted to get rid of one. I emailed him and we made a deal. Jerry is a cool dude, it was a pleasure to talk to and deal with him. If it wasn’t for a couple thousand miles between us, we’d have been good buddies. Anyway, I now have 2 44 magnum LAR Grizzlies. To my surprise there are a lot of differences. Jerry’s was one of the first 100 made, mine was one of the last 100 made…only 1000 ever made so this is a unique opportunity to see the differences from the beginning to the end of a sadly short production life.

The Obvious: The early gun I just got has a 6.5 inch barrel, my end of the run gun has a 5.5 inch barrel. As far as looks go I prefer my 5.5 inch gun, I’m betting that extra inch of barrel makes a worthwhile difference when I finally get it to my chrono for some testing. Next, you can’t see it so well here but my later gun has a light gray parkerizing, Jerry’s early gun has a much blacker parkerizing. You’ll see if you look at the top guns mag catch, see the difference? Much lighter parkerizing. I wonder if they switched up from zinc to manganese somewhere in that 1000 gun run? I don’t know. 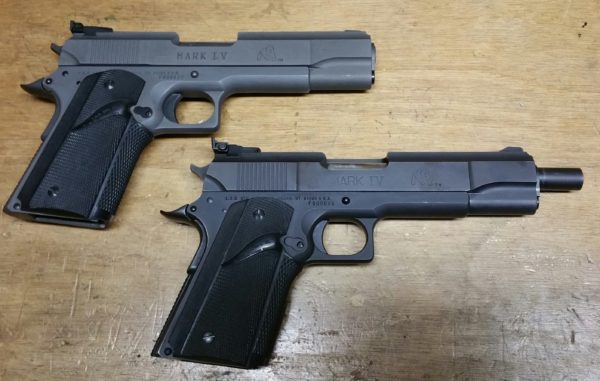 The Markings: On my end gun the markings are much deeper, crisper and of a different print than the early gun below. It’s not just the finish on the old one not being as nice, they are just better markings. 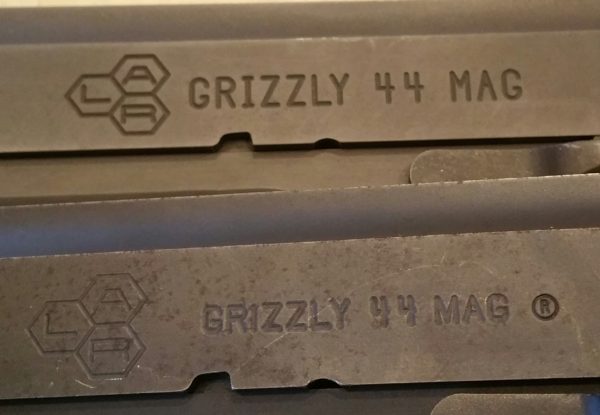 More Markings: On this side you see the same thing, early gun on the top this time and later gun on the bottom. The end run had better, deeper markings. I would think that with a production number of 1000 guns they would have been all done at once and all the same. Clearly they are not…I wonder if it was 1 run of 1000 or if it was broken up in batches. 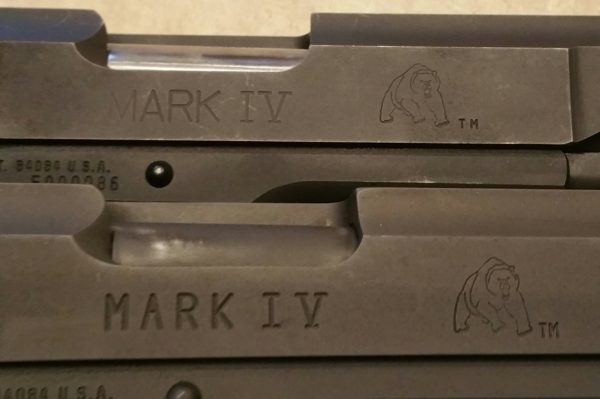 The Sights: I really like the late guns sights over the early gun. The later guns sights (on left) are 3 dot and smaller, the early gun has a sight like a “T”. It’s ok but I want to replace them with some different ones. I am concerned over finding a set as even the cut in the slide on the early gun is different. 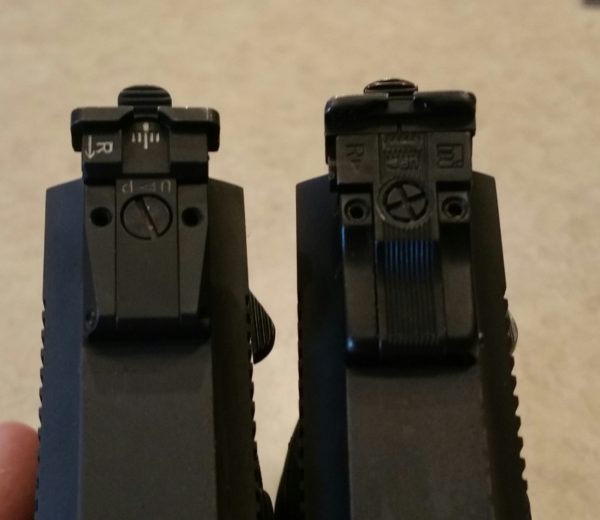 More Sights: A profile look at the 2 different sights. Old on top, new on bottom. 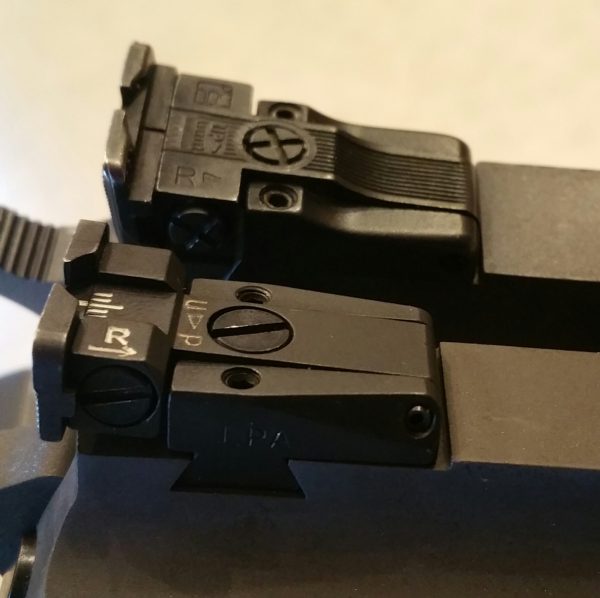 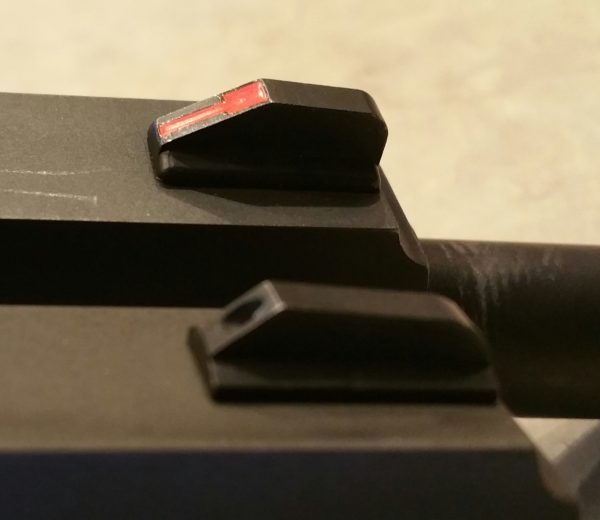 Even the front sights are different. Early gun on top.

Magazines: The early gun magazine is on the left, note the finish and lines of it are not near as nicely done as a later gun magazine. I wonder if they switched makers? Regardless they all run flawlessly but in person the later mags look much nicer. 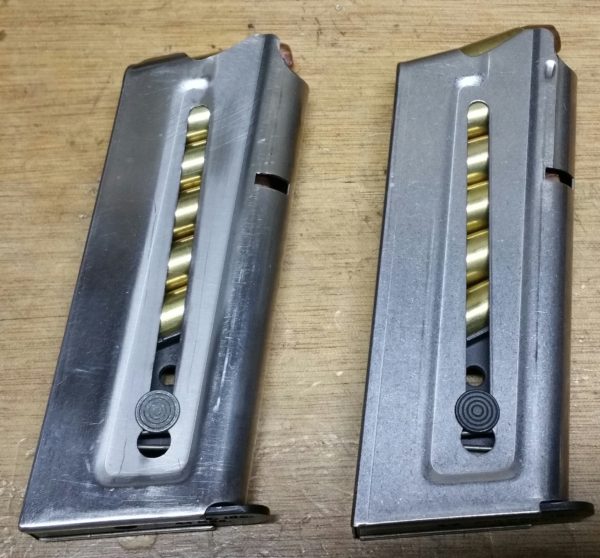 Notice the smoother lines and nicer finished look of the later magazine on right. It just appears to be made with more attention to detail.

Note the difference in the welds. Much smoother on the later mag.

Weld is much nicer on the right (later) magazine.

1-18-17 Update: The below pictured pin was broke in half I discovered when I took the frame all the way down. That’s why it was sticking out. I got a new pin at local gunsmith shop. 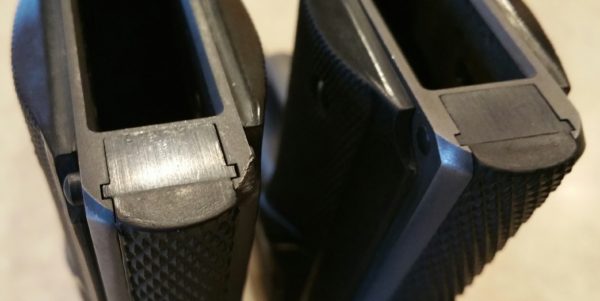 Magazine Release: My later gun up front, notice the different mag release buttons. I could care less about the texture but my late run gun has a button that sticks out considerably farther. When I customize Jerry’s old gun I will replace it with a more extended version release.

Both guns have the same wrap around Pachmayr grips. I bought a set of micarta grips, they haven’t arrived yet.

Extractors: Notice here Jerry’s old gun has an extractor that fits flush, where on my later gun it sticks out. It doesn’t make any difference in function but in this case I like the early gun version more. 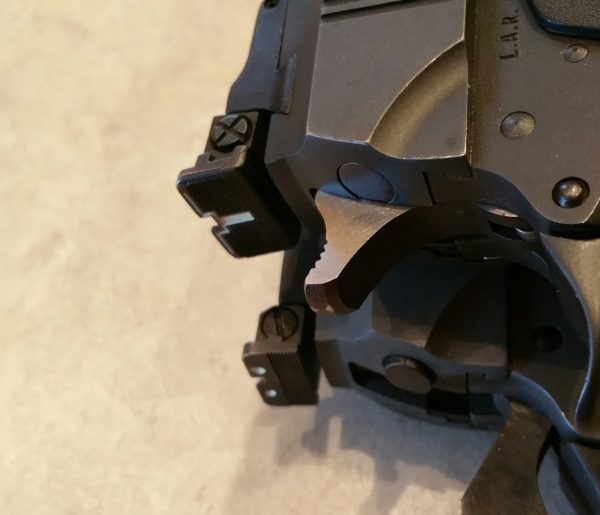 Safeties and Hammers: The early gun has a silver polished hammer, my later gun a parkerized hammer. They do appear to be exactly the same hammer besides finish. Also notice both safeties are blued. Neither of them are parkerized. I am assuming this was a part they got in from somebody else, maybe late and they just put them in. Who knows, who cares, they are extended safeties and work. 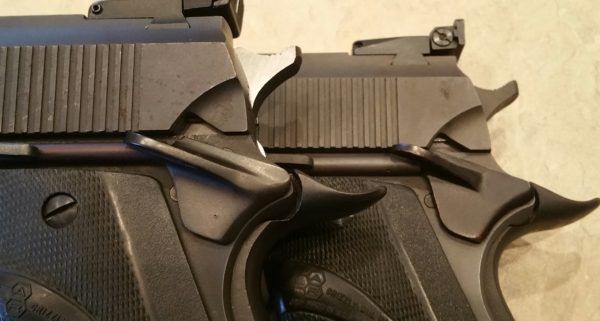 You may see a slight color difference in the spring tube. Old gun is unfinished metal and later gun (rear one) is parkerized. Again no big deal, just something I noticed that you never would if you didn’t have 2 side by side.

Barrels: Last as you can see the hood is not parkerized on the early gun and is on the later gun. I couldn’t care less either way, just another difference. 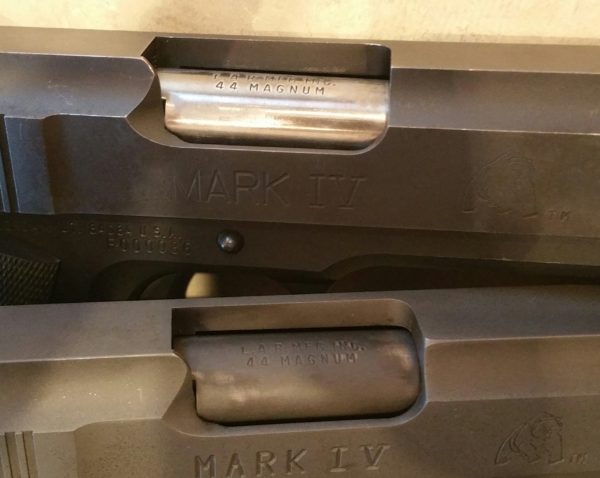 Early Gun: (#86 of 1000 off the line) Smoother slide action yet a stiffer, slightly gritty trigger. Finish is not nearly as nice but that is not a drawback here. Once I get this done up with a cerakote job I have in mind it will look way better than the later gun. I also don’t care for the sights but again they are coming off the gun as soon as I find a suitable set of adjustable nightsights.

Later Gun: (#912 of 1000 off the line) Over all I think it is a much more attractive gun and attention to small details were perfect. I feel like they really had it down pat in the end. I can’t really bring myself to customize such a rare, beautiful weapon. This baby to me is perfect. I love it.

I am planning a total custom build on the older Grizzly. Adding a pistol light rail, night sights, trigger job or possible replacement, new mag release and a super duper Kryptec cerakote job. The old girl will be awesome when she’s done. As that project moves along you will have a pic heavy review of the whole transformation. I want to thank my new buddy Jerry Adams for allowing me the pleasure of owning his old Grizzly. You won’t be disappointed Jerry, she came to a good home and I plan to make her beautiful. (more beautiful) LAR Grizzly pistols are great…just one of the coolest thing I have ever owned. If you ever get a chance buy one. They are rare and pricey, they are also worth every penny. Accurate, reliable and built like tanks. They will take anything you can fit in the magazine and ask for more. Simply Awesome!! Thanks for reading and train often.

PS. I’m still searching for a 50AE LAR Grizzly. If you have or know of one don’t be afraid to comment here or email me at cary@tacticalgunreview.com   It was Jerry’s comment that got this 2nd 44 mag to me.