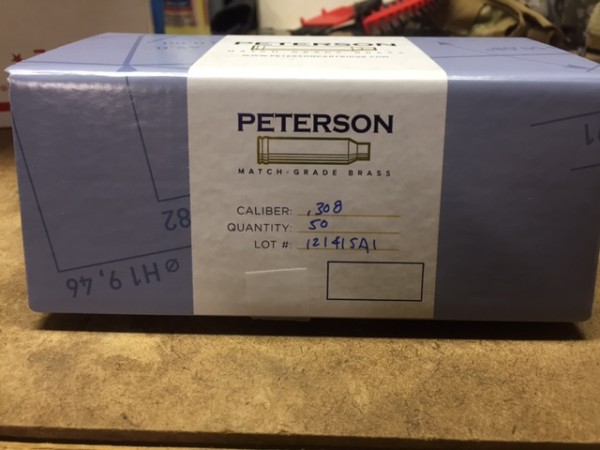 This is the start of a multi part review. So this will be the initial impression on the Peterson Cartridge Co. so to speak.

I heard of Peterson Cartridge Co. from a podcast I listen to when I’m driving or reloading. The thought of another high quality brass manufacturer peaked my interest. After my last precision rifle match it was time to get new brass. It was on it’s tenth firing and as muddy as it was I lost most of it anyway.

I’ll be using my standard load of 44 grains of varget with a 178 AMAX seated to 2.8 COAL. This is a mild load for my rifle that’s pretty consistent. I normally get 10-12 loadings on my Lapua brass so I’m interested to see how many I will get with the new brass. I’ll update this article as I use the brass and report back if any of my loading numbers change.

One thing that Peterson Cartridge does that I like is put a lot number on the box. One more thing that us picky reloaders can keep track of if we want. So I got the brass out for the first firing. I used the exact same load that I use with my Lapua brass. CCI large rifle primer, 44 grains of Varget and a 178 AMAX seated to 2.8 COAL. Here’s the numbers I got. The numbers are pretty much exactly what I get with my Lapua load. I’m excited to see how it holds up after a few firings. I’ll be using it in my next match so hopefully I won’t lose any.

Finished up the match last weekend and luckily I only lost two pieces of brass. Brass held up well. No decreased performance was noticed. All data gathered from the previous firing was spot on. I’ve resized, trimmed and primed for the next firing. One thing to note is that the primer pockets still feel the same as when I first loaded them. With my Lapua brass I tend to notice a looseness in the primer pockets at around the 4-6 reloading. So we’ll see what happens with these.

So after a few matches and a few practice sessions I’ve finally wore out the brass. Over all I lost about 8 pieces of brass. With 14 firings on the last 92 pieces I’m pretty happy. I probably could have gotten a few more firings out of it but I tend to ditch brass as soon as I start to feel the primer pockets loosen. Never had any deviation in the numbers I posted above. Except for standard deviation. It dropped from 7.6 to around 5. Overall very happy and is definitely an alternative to Lapua without any compromise.