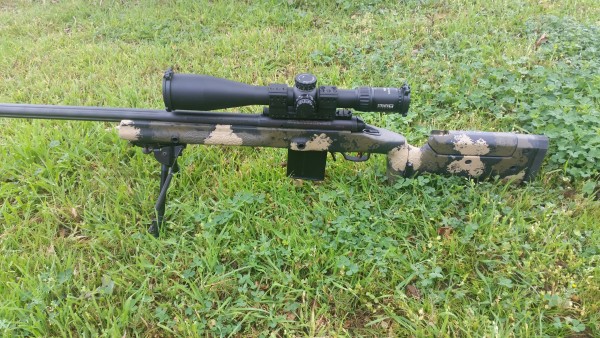 A while back I picked up a Savage Model 12LRP in 6.5 Creedmoor.  The rifle came from the factory with detachable bottom metal, an HS Precision Stock, and for a mostly inexpensive rifle is well equipped.  But right away I found issues I did not like with the factory configuration.  The barrel on this rifle is a fluted bull barrel that is 26″ long, so getting into and out of a vehicle is cumbersome.  Also, the HS Precision stock had a low comb and was in fact chipped near the bottom of the stock.  Both easily fixed and minor, but I did not like it much.  I had received an extended magazine release and 10 round mags from Dark Eagle Customs which worked very well, but I was not satisfied with the rifle to this point.  I decided to take the rifle to the next level and contacted Manners Composite Stocks.I contacted Manners in late 2014 regarding this and they recommended I wait until after SHOT and I did.  Manners released a new Savage specific mini chassis which was perfect for what I was wanting to do.  I settled on the MCS-TF4A Elite Tactical with the GAP camouflage pattern.  It took several months to get the call from Manners to send my barreled action to them, and once I sent it in, it took some time to get it back.  These delays are why it is taking me until now to get the review done.  I had intended to do a complete comparison between this rifle and the Ruger Precision Rifle, which is a topic for another day.  I will say that when the gun came back, I was blown away by how nice this stock really is.

Prior to doing anything to this rifle, I chose a Talley 20 MOA base for it.  It gives me the opportunity to use optics that may not have enough elevation for the distance this rifle can shoot.  Currently, I have a Steiner T5Xi 5-25x56mm scope sitting in a Sphur one piece base.  I had a Burris XTR II on this rifle before, and feel like that optic was a great option for someone just getting into this kind of shooting.  I did not care for the way the turrets zero stop worked on that scope and decided to upgrade to an all around better scope.  I have discovered that I really like the Steiner T5Xi series of optics, and will soon have all 3 sizes available on different guns. 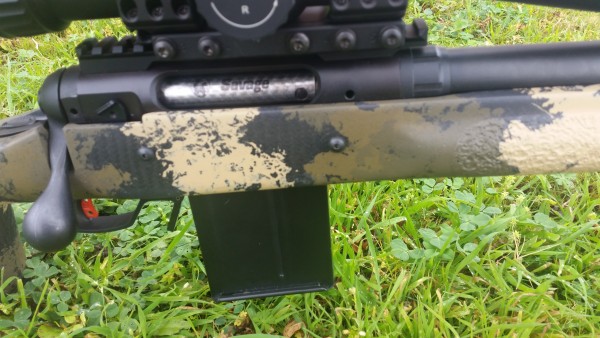 The stock is an Elite Tactical upgrade, meaning it is made of carbon fiber to reduce weight.  They then paint over it in the pattern you wish to have, in this case the GAP pattern.  I will likely use the rifle while hunting a variety of different areas and as such wanted a pattern that was pretty universal.  I selected the GAP because I think it looked the best would be the most functional in the environments I needed it.  Additionally, I felt the need to have a folding stock as the 26″ barrel is very heavy and long and having the ability to fold the stock will make getting around with it much easier. 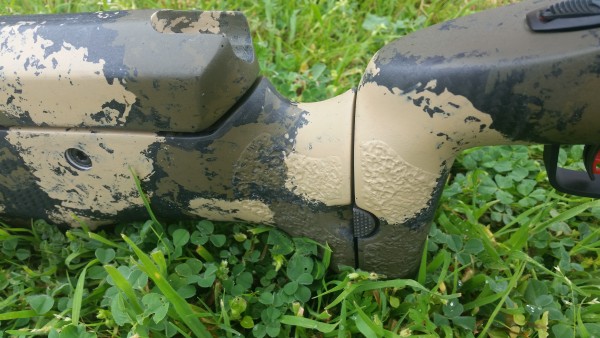 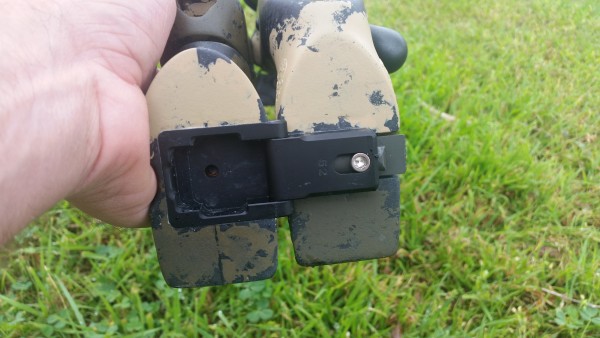 The Stock folds by pushing the button on the right side of the stock around the palm swell.  The hardware is very robust and beefy.  I believe it will last a long time regardless of how badly you treat your gear.  Once folded, there is a button you push on the stock to lock it into the folded position.  When you push the button in, it locks the stock in place.  Simply push again and the stock unlocks, very easy and very secure.  The butt pad on the stock is very soft and will aid in soaking up any recoil you may have.  With this being a 6.5 Creedmoor there was no real recoil to speak of however, if I had this rechambered into something more stout the stock will help soak that added recoil up without issue. 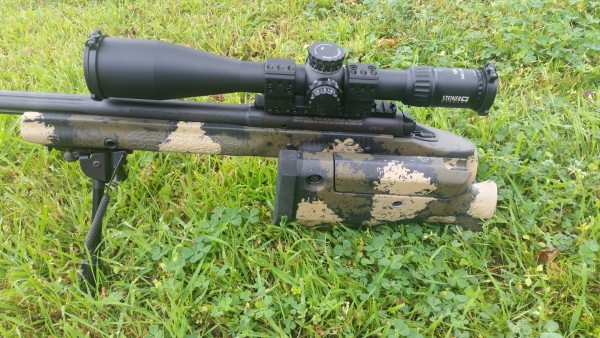 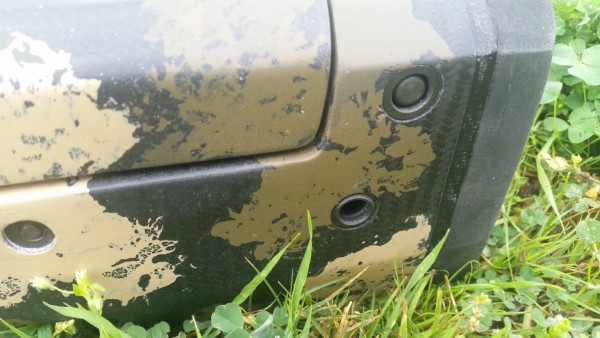 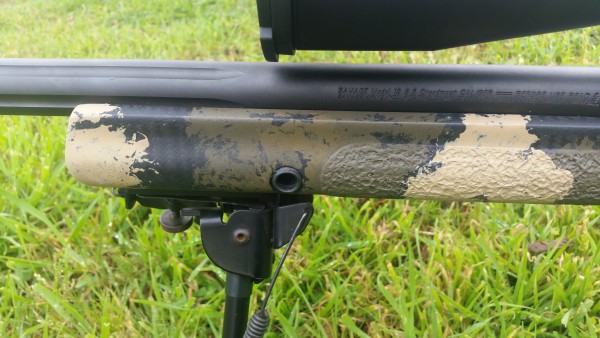 There are 2 swivel studs mounted to the bottom of the stock that easily allow for the mounting of a Harris Bi-Pod.  There is room on the front of the stock that a rail could be added for a night vision clip on if you so choose, and while I use clip on night vision, I did not opt for this. 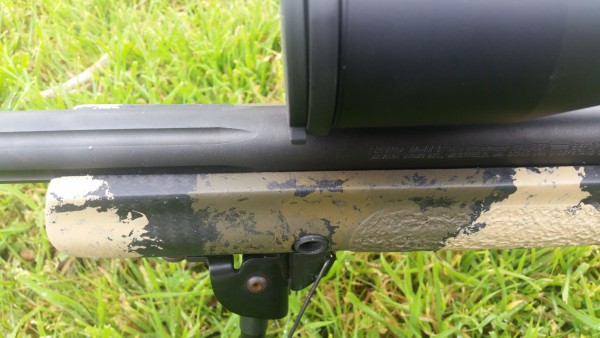 I sent the rifle to Manners as a barreled action.  Manners installed the Mini Chassis and stock for my barrel contour and did a great job.  It took them a little time to do so, but I am always willing to wait for something that will be worth it.  The stock is very high quality and easily outshines the workmanship of the Savage rifle that sits in it.  I’ve even had some people question why I would spend this much money on a stock for a Savage.  This rifle shoots very well, and as such I wanted to improve on an already working rifle.  In the Precision Rifle Series, a good number of shooters use Manners Composite Stocks.  I decided that a Savage can work as well as other high end guns and custom builds should the work be put into the rifle.  I believe that with some Action work that this rifle will be as good as anything built with the addition of quality glass, and a quality stock or chassis.  I did not notice a large jump in accuracy from adding this chassis, but it did allow for the ergonomics to be such that any type of shooting with it is considerably easier.  The chassis seems to work well and now the rifle uses the tried and true AI mags.  Feeding has improved greatly over the factory style mags and that alone is worth the extra cost of the mini chassis in my mind. 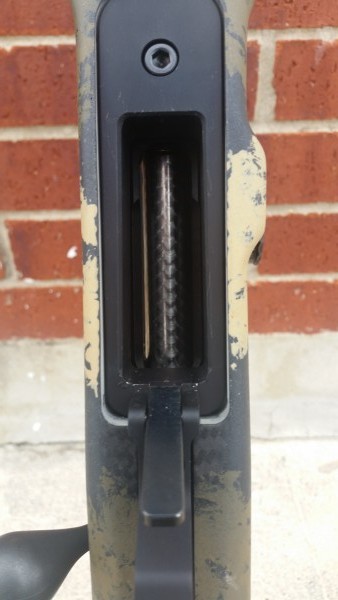 The Savage 12LRP is a shooter out of the box.  If someone is wanting to shoot long range on a budget, it is a great place to start.  The rifle is heavy and should help someone with their basic fundamentals if they want to try and learn to shoot on the cheap.  This stock is not a cheap upgrade, but if someone is wanting to build a rifle on a budget, this is a good way to start.  There are plenty of drop in Savage barrels available and other accessories that would help a Savage shooter get to their desired goals.  I’m a fan of buying quality guns and accessories from the beginning, and think that Manners Composite Stocks are the ultimate upgrade to rifles such as the 12LRP or any rifle for that matter.  Go to their website here and look at the stock builder for all the options they offer.