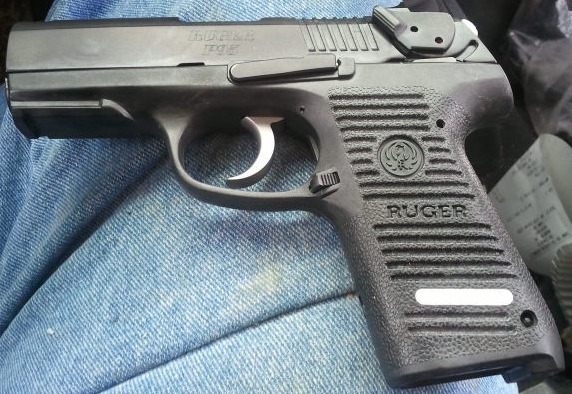 Today I want to discuss the Ruger P95 9mm pistol. I’ll say this for the record – I think it to be the very BEST full size handgun on the market FOR THE MONEY! If you are on a budget as most people are, I can’t think of a single thing I’d consider buying over a Ruger P95. It is reliable enough for MIL and LE work; it is accurate, well made, totally reliable, concealable, high capacity and decent looking. It will fill the role as a concealed carry gun, home defense, or printing nice groups at the range. I believe it to be the best bang for the dollar available today. I have bought four of them this year and $309 was the most I paid. The other three were UNDER $300 free and clear. Here is what I do. I bid each one on Gunbroker under $300. I do it all the time, just bide your time. Like I said three of them home for under $300. Try to find another gun that nice for $300. Good luck.

So what do you get for your $300? A full size, built like a tank, high capacity 9mm pistol. It comes NIB with two 15 shot magazines and a mag loader. You get functional 3 white dot sites, a decock/safety lever, ambi mag release buttons  AND a light rail.  😉 You know how I feel about lights. Go Streamlight LED TLR 1, 2 or 3. The Ruger P95 has been used by the US Military by the way. A batch was issued to tankers and chopper pilots awhile back. So enough said, it passed some kind of trial. Additionally it is the pistol issued by the Federal Bureau of Prisons. I have a friend who was an armorer down at FLETC in Glynco, GA. (that is the Federal cop training grounds). He worked on a ton of different guns down there and said two things that stuck in my head. If he were God for a day there would only be Mossberg 500 shotguns and Ruger P95 pistols. They NEVER fail he said. Now I would n0t go quite that far with pistols as I’m an XD man to the bone but it is definitely a Kudo for Ruger 9mm’s. Like I said I bought four and I’m always  trying to get more of them. Three have already been talked out of my hands by other people – one war buddy, a cop buddy and my Aunty’M. 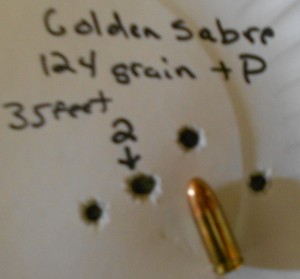 Shooting one: Is the trigger the best? Nope, but it is not bad! Does it go bang every time you pull the trigger?  YES it does. Does it shoot strait? Yes again. Is it comfortable and user friendly? Yep. There is just nothing to complain about period, nothing, ESPECIALLY for the $ spent. I  have bought WAY crappier guns that cost a lot more. If you are on that budget and it is tight you might be thinking used Taurus or God-forbid a Hi-Point. Please just save a couple more dollars and get the Ruger. You will have a great gun in perfect working order that is going to outlast us all. Check the group out. That is Remington +P Golden Sabre’s. Get yourself some Critical Defense 115 grain to try out too.  Either of those two  will serve you well for defensive purposes. Ball ammo (in the pic for scale) is for practice only. Buy good, fast stuff with a good bullet for the real deal.

Summary. I think I have been clear. You absolutely cannot go wrong with one of these fine pistols. The best part is it doesn’t break the bank. I have never seen a better firearm for less money and a lot of stuff that is worse and costs a lot more. You won’t be sorry.

As always thanks for reading and happy shooting.