Today I am taking a break from my “end of the world” prepper series to discuss a specific rifle in my prepper plan. Savage MK II TR is a recent purchase but I have spent enough time behind her to give you the rundown. So here it is.

If I had to use one word to describe the Savage MK II TR that word would be “awesome”. I just don’t have a single complaint. It looks great, handles great and shoots even better. Let’s go over a few tech specs and some of the shooting and ammo tests I have done with her. 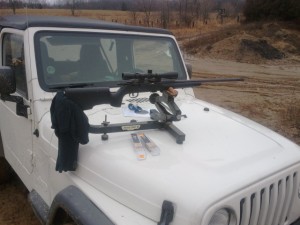 Specs: The TR weighs in at 7.5 lbs without the scope. It is 40 inches in length with the 22 inch 1/16 twist fluted heavy barrel. The stock reminds me of a McMillan style with a comfortable pistol grip and a pleasing profile. It is made of wood with a flat black crinkle coated texture. The metal finish has a texture as well and is flat black also.

It comes with one 5 round magazine and the scope bases mounted from the factory. Also with a large tactical style bolt handle and the really nice “accu-trigger”. The accu-trigger is a superb, lite, crisp and adjustable trigger which has gained a reputation as being a very good thing to have. Owning both, I prefer it over the Remington 40X trigger that comes from the factory on a lot of 700’s.

This rifle feels perfect to me and looks just as good. There are 18 models all together so if this one doesn’t suit you they probably have one that does. I had mine threaded for the day I finally get my tax stamp through the system for a suppressor, you can buy it threaded already and that model is the “MK II TRR-SR”. This MK II TR one was available though so I just took it and had the work done. 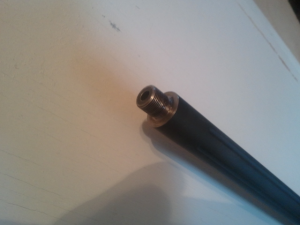 Price: At less than $450 to my door I can’t complain about a thing. Many of the other models are cheaper, some at $250 that looked pretty good too. I thought about getting one of the cheaper ones but the TR is very “tacti-cool” so I plunked down the extra cash. Truth be known I bet the similar HB versions with the cheaper stocks, small bolt handles and less expensive finishes shoot just as well. All in all as a precision target rifle, for the money, I think I made a great choice. I do suspect though you can have a gun that shoots just as well for 3 bills. 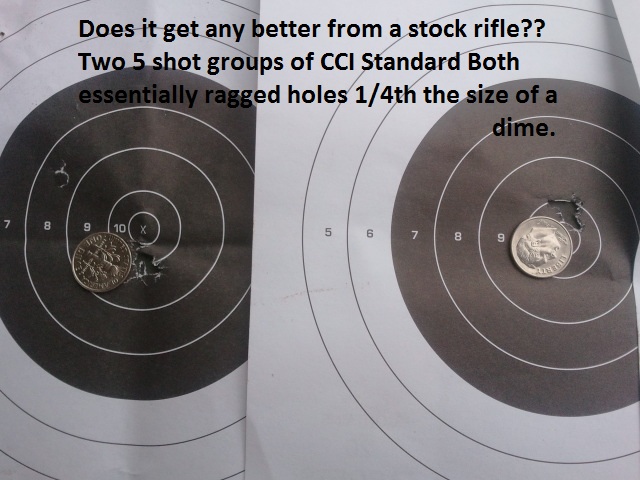 Accuracy: Pictured are some of the groups I have fired from the 50 yard line using the correct target for 22 rifle’s at that range. As you can see if you do your part the Savage won’t let you down. I expected it to shoot good. I have to admit though I did not expect to get the groups the CCI Standard velocity gives me. They are better than I had dreamed of. The CCI mini-mags are good, the CCI Standard is GREAT! I have yet to try Velocitors but will when I get a chance and update. 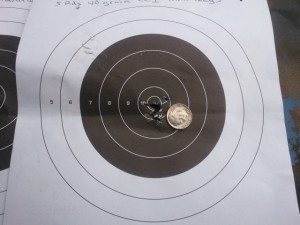 The Winchester Dyna-points group alright I guess, larger than the CCI but they were consistent. Good enough for small game but not for shooting out the 10 ring. The only thing with those was the last round in the mag never wanted to feed.

The Federal Bulk Pack shot for crap but that, in my experience, has been pretty normal for that stuff. For me it hasn’t been good for much but shooting at coffee cans with a new shooter. My bottom line is get some CCI ammo first and see what happens. I suspect you will be happy with the results.

Wrapping up the shooting portion I have had zero misfires out of any ammo tried and zero “flyer’s” using CCI ammo that were not shots I messed up myself. The performance has been consistent and better than I had hoped for. 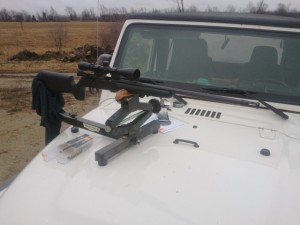 Summary: I remember having an opinion that was formed way back as a kid. That opinion was that Savage’s were a second rate gun. As 10-12 year old’s, a lot of us got 22’s for X-mas and B-days and such back then. The kids that got the Ruger’s, Remington’s and Winchester’s were somehow supposed to be superior to the kids that got Savage’s..I don’t know why, I guess because we were kids. Never the less that stigma stuck with me. Then one day about 12 years ago I was at my Agencies regular weapons qualification and afterwords the “gun nut” officers would hang around and shoot our personal stuff for fun. A dude out there had a bolt action HB 308 and was nailing that X-ring over and over. I asked him about the rifle and he said it is a stock Savage Tactical 308. I was like really! I never thought those Savages were “all that”. He was a good guy and went over all the good things Savage had to offer and said he felt the company had come a long way in the last few years. I walked away with less of that stigma and a new respect for what Savage was turning out. Now that I own my first Savage and it is an absolute tack driver, that stigma is gone entirely. I think this rifle would serve just about anybody looking for a precise 22 well. I am so glad I bought this rifle and I think you will be too.

2-2017 Update: I had my barrel shortened to shortest legal length and added a suppressor about 3 years ago. This Savage continues to do what it always did which is land bullets right on top of the previous bullet! Just love this thing. With the Can on all you can hear is the firing pin hitting the rim. It’s super quiet. I have a 1 inch spinner target in my backyard 63 yards out the back slider door. In the winter I regularly get down prone with Kelly and we shoot at that 1 inch spinner. 99.9% of the time we will both go 10 for 10. The rifle really shoots well and this is about 7000 rds later now. I found some stronger metal for the stock and replaced the factory stuff, cheap to do and worth it. I’ve cleaned the barrel twice in all that time is all. Also my zero has remained virtually unchanged the last 4 years. About 800 rds ago for some unknown reason I had to give it .5 moa elevation boost, no big deal. This rifle has been worth every penny.