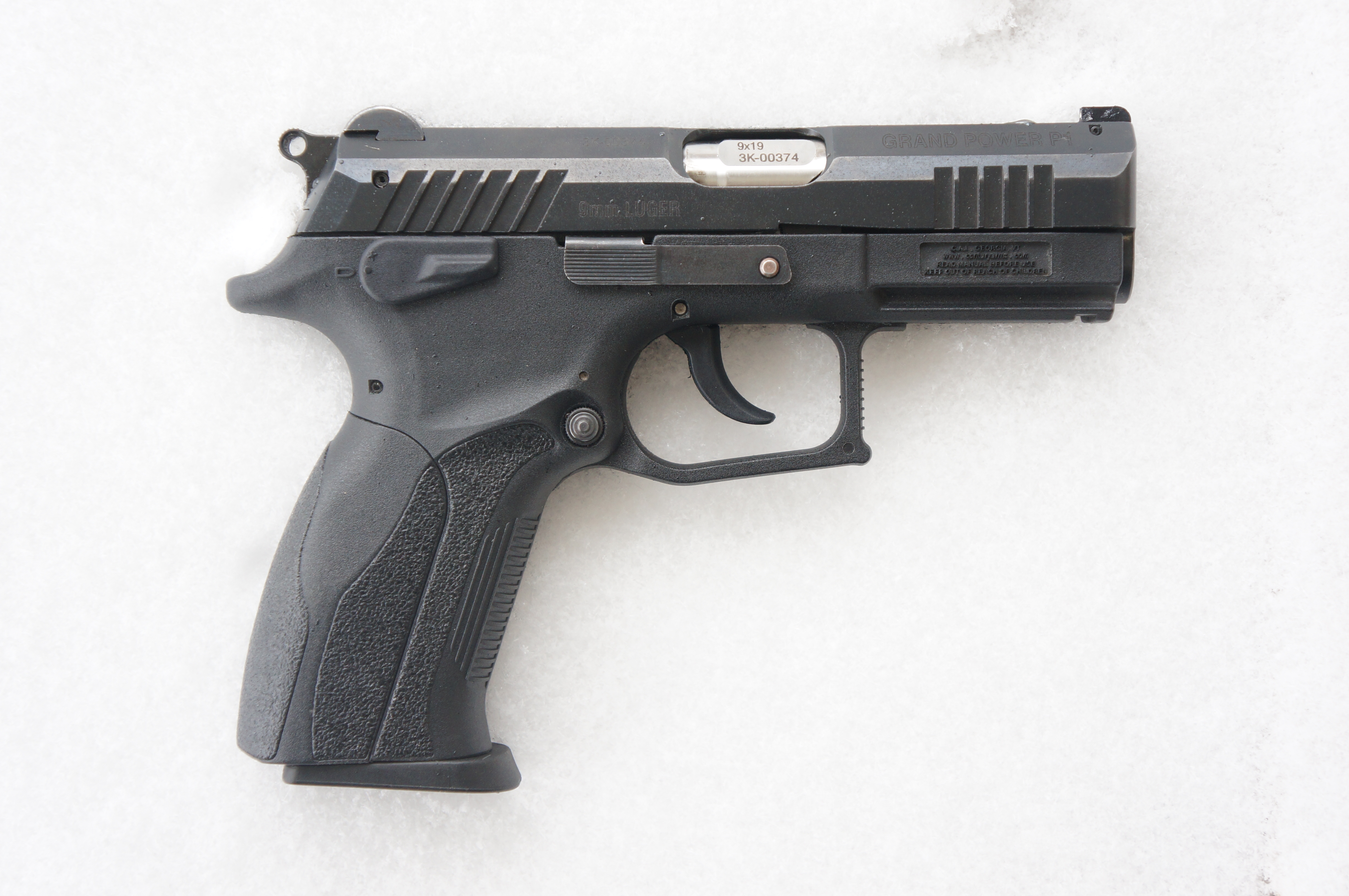 After they sent me the Stingray-C pistol, I got an email from Century International Arms, listing their new products. At first, I thought the email was simply an advertisement. Then I noticed they were asking which of their new products I wanted to review. I had to quell the urge to respond, “Everything.”

My eye settled on a pair of Slovakian handguns. The K100 Mk7 an P1 Mk7, both made by the company Grand Power. Before long, Dina Sanders of Century (who is quite helpful, by the way) had arranged for the Slovak Twins to be sent to me. Before long, my dealer called me up and said, “More pistols here for you. Damn, how do you do this?”
“What can I say? The CIA sends me guns.” Yeah, I know it’s a bad joke. Thankfully, there’s nothing bad about the Grand Power pistols.

These two pistols have almost identical frames. The only difference I can find is the recoil spring guide, which is slightly longer on the K100 Mk7. Both function in the same manner. Both are DA/SA and have a manual safety which can only be operated when the hammer is either in the half or fully-cocked position.

The safety is actually my only real complaint on the Grand Power design. I’m not particularly a fan of a safety in a double action pistol, preferring a decocker instead. But not every pistol is designed like a SIG and not every shooter prefers a decocking lever to a manual safety. So honestly, my big gripe is more of a personal preference than a fault in the design. Trigger guard pulled away from the slide, pistol ready for disassembly.

Continuing along the vein of turn-offs, I initially found the pistols’ take-down annoying. It’s not as frustrating as the old Ruger MkI I learned to shoot with, but it’s unconventional to say the least. When disassembling the pistol, make sure to pull the trigger guard down and forward completely (not just a fraction of an inch). You then pull the slide to the rear and lift it off the frame.

Now as bizarre as a flexing, bending polymer trigger-guard might be, I actually got used to it. In fact, I grew to like it. Unorthodox though it may be, the take-down method is really quite simple. No need for tools or three hands. Re-assembly is similarly simple.

Due to the rotating barrel (more on that later), there’s no need to line the barrel up with the frame before inserting a takedown pin. No need to contort your body around the handgun as you try to re-assemble it. It’s as simple as retracing your steps, as you’ll see in the video. To be frank, I like the take-down method. I guess it grows on you.

The barrel is of an interesting, rotating design. Functionally, it’s similar to the Beretta Cougar. The barrel and slide move rearward until the barrel has rotated 45 degrees, at which point the slide continues back independently of the barrel. This results in a low bore axis, similar to the Steyr M-series and the Caracal series of pistols. A steely gaze and ballistic nitriding are a winning combination.

Ambidextrous controls, including an ambi mag release are a real treat. Practicing with your weak hand simply becomes a matter of mirroring your regular movements, rather than learning to operate the pistol in a different way. Southpaws will love this feature.

The slide is QPQ treated, increasing its resistance to wear, corrosion and scratching. The barrel is carbonitride treated, increasing its hardness to between 52 and 54 HRC. This increases its wear resistance and is a major selling point for me. In addition to the reduced wear, this treatment has the added benefit of making the barrel incredibly easy to clean up. I can simply wipe it down with anything, which is superbly convenient. Of course, this may have something to do with the fact that I pre-treated the barrels with Froglube.

The trigger pull on double action is noticeable without being too heavy and is very consistent. The single action trigger pull is light and crisp. The feel of the pistol in my hand is excellent and if it weren’t, I would be able to quickly and easily fit it to myself using one of the four interchangeable backstraps that come with the pistol. While the manual indicates that the magazines hold 15 rounds, I’ve found that they will hold 16 without issue. The magazine on the left is holding 15 rounds, the one on the right, 16.

Despite their lightweight, polymer frame, the Grand Power pistols have remarkably soft recoil. I found that I could do Mozambique drills at 10 yards with surprising ease and accuracy. And the pistols took whatever I could throw at them, be it cheap Russian ammo, moisture, or being buried in snow. Gritty or dirty, the Grand Power duo functioned well.

Though I enjoyed the Stingray-C, I have to say that the both of the Grand Power pistols beat it out for ease of carry, comfort in the hand and pure shootability. The slimmer grip on the Slovakian models is a real selling point for me. Even small women whom I’ve let try the P1 Mk7 have found it to be quite comfortable in their hands. While the K100 is a bit long for concealed carry by smaller shooters, the P1 is small enough to be hidden.

The trigger, controls and even the disassembly are all positive points to this unique line of handguns. If you’re in the market for a semi-automatic 9mm with ambidexterous controls, great ergonomics and superb corrosion resistance, I strongly recommend you check out the K100 Mk7 or the P1 Mk7 at Century International Arms.

Of course, special thanks to AIM surplus for pistol ammunition.