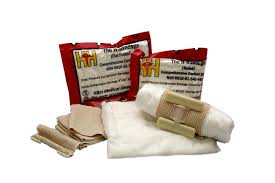 Not every wound will be as dramatic as a gunshot wound to the femoral artery. You may encounter a situation where someone has a significant laceration that can be treated with direct pressure. The following situation is where the H Bandage or Thin H Bandage would come in handy.

In Iraq, I carried a small Israeli filed dressing. And when I say “Israeli,” I mean one I got while I was living in Jerusalem. It’s small and the package has Hebrew lettering. So at this point, I should probably explain the difference between a field dressing and an Israeli/pressure bandage.

A field dressing is simply an absorbent gauze pad with a strap to hold it in place. These have been used for decades. The problem with a field dressing is that unless you’re lucky (and very skilled), it’s extremely difficult to put a lot of pressure on the wound. Enter the pressure bandage, invented by Bernard Bar-Natan, a former IDF medic.

There are several different types of pressure bandages, but they all share similar features. The strap is elastic, like an ACE bandage. Over top of the absorbent pad, there is a pressure bar. For the H Bandage, this bar is in an H shape (imagine that). This allows the first responder to wrap the strap around the wounded person’s limb or torso. The strap is then wrapped around one section of the H. The strap is pulled tighter, which applies pressure directly to the wound area, slowing the rate of blood loss.

The H Bandage incorporates an interesting pressure feature. Instead of a single crescent-shaped pressure applicator through which to thread the bandage, it utilizes an H-shaped (imagine-that) pressure bar. This allows the user to loop the bandage around each side of the H and pull tight, applying pressure directly to the wound. The strap is then reversed, wound back around the limb (or torso) and can be looped around the opposite side of the H, letting for even more pressure to be brought to bear in order to control bleeding.

During my testing, I worked with a local paramedic instructor named AT. His initial impression when using the H Bandage was very positive, remarking that the pressure was sufficient to act as a tourniquet in and of itself. We both found it easier to use than the Israeli Bandage. The pressure bar on the Israeli bandage has teeth, which are meant to prevent the bandage from loosening once tightened, but can snag the elastic strap as you try to manipulate/wrap it around the affected body part.

I would recommend opening the bandage’s wrapping on one side instead of tearing it through the middle. This will make it easier to use separate the wrapping sides and use the sterile interior of the wrapping as a wound seal, if needed.

The blow-out kit, Individual First Aid Kit (IFAK) or Trauma Kit NOW!) is also where I keep my boo-boo kit (Band-Aids, bacitracin, ACE Bandage, sports tape and meds like ibuprophen, acetaminophen and anti-diarrheals). I keep this mini-packet in my IFAK, but on top of everything else, as I’m much more likely to need it than anything else.

Let me be clear; the contents of your boo-boo pouch are just as important as an IFAK. True, you don’t want to suffer major blood loss from an injury while out hiking the trails. But you want to know what can take you out of commission just as permanently, and is much more common? Diarrhea. Yes, the runs can ruin your day, dehydrate you, and fever can turn you into a shivering wreck. Imodium and ibuprofen can keep you going. Hydration is supremely important as well. If you’re near a water source, or if you have no way of purifying collected water, then you should be carrying potable water in canteens or hydration bladders.