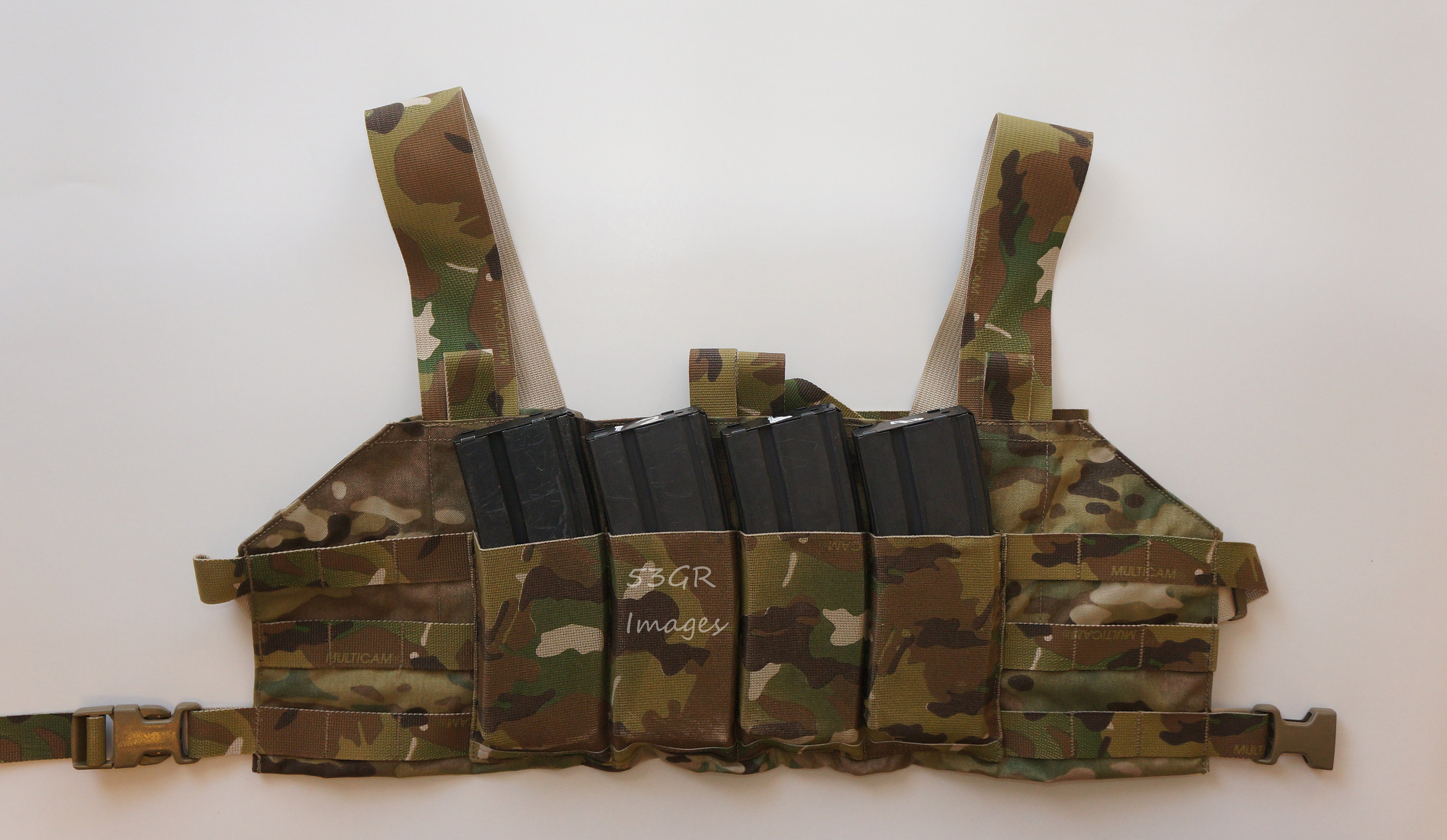 Previously, I’ve written several articles on body armor and armor carriers. However, armor is heavy and not always appropriate to the situation. What if you want to run a chest rig unarmored and are looking to keep weight to a minimum? Enter the Blue Force Gear Ten-Speed M4 Chest Rig. This ultra-lightweight piece of gear is simplicity at its finest.

The particular model I reviewed is their multicam version. I used it off and on for months and very quickly fell in love with its light weight and ease of use. I was surprised at how well the elastic mag pouches held my AR-15 magazines. Running, jumping, and dropping prone did nothing to dislodge these mags, but it was incredibly easy to withdraw them with my support hand to perform reloads.

The design is simple and goes on over the head. A single buckle strap on the back secures it to you very well (provided you’ve adjusted it beforehand). The chest rig can be worn low or high. Though the M4 Chest rig only holds 4 magazines in its basic configuration, I rather liked its minimalist approach. All too often, a chest rig will be bulging with a plethora of pockets for you to store every magazine you own into. It might be nice to have 12 magazines, a pistol, a canteen, wound bandage and radio right there for easy access, but the weight becomes a hindrance quickly. Even eight loaded magazines, a pistol, canteens and rope tend to press in on the rib cage.

The Ten-Speed doesn’t fall prey to that problem. The MOLLE webbing on either side of the 4 mag pouches (3 rows by 3 columns) allows the user to place a number of different pouches on the rig, if needed.

I chose to place an old Blackwater ACU triple pistol mag pouch for the left hand side and kept the right bare. The internal belly pouch is quite roomy and runs the entire length of the chest rig. You could conceivably store a pistol in it but this would make the setup uncomfortable and negate its naturally low profile. I simply placed a few range documents inside. 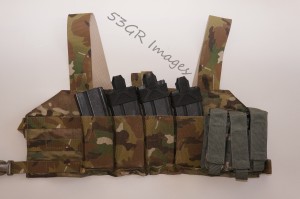 The M4 chest rig with a Blackwater pistol mag pouch

The chest rig has a very sturdy construction. Blue Force Gear claimed that the connecting strap in the rear could be used as a drag handle, similar to those found on MOLLE vests and plate carriers. I was suspicious of this claim, as the Ten-Speed is quite light. So, I tested it out, having my neighbor Augie attempt to drag me while I was wearing the chest rig.

I’m 165 pounds, which isn’t large, but should certainly put enough stress on thin straps to break them, right? I lay on my back to simulate a serious casualty. Augie (the Vietnam Vet who has helped me with other reviews) propped me up and gripped the rear cross strap, and began to haul backwards.

I expected the strap to break with a pop and for Augie to go stumbling backwards. Instead, the M4 chest rig went tight around my chest and snug underneath my armpits, and I began moving backwards. I let my arms go limp and did my best to imitate a rag-doll as Augie dragged me all over a nearby field. Not only did the chest rig hold up very well under the use and abuse, but it actually felt rather comfortable. Well, as comfortable as you can expect while being dragged across a frozen field with icy winds whipping past.

The Ten-Speed M4 Chest Rig’s light weight, reliability, ease of use, and quality construction make it a piece of kit I’ve fallen in love with. It’s replaced my previous chest rig, one which I’d had for years. Now, if I’m going somewhere with my carbine, the Blue Force Gear chest rig comes along too.