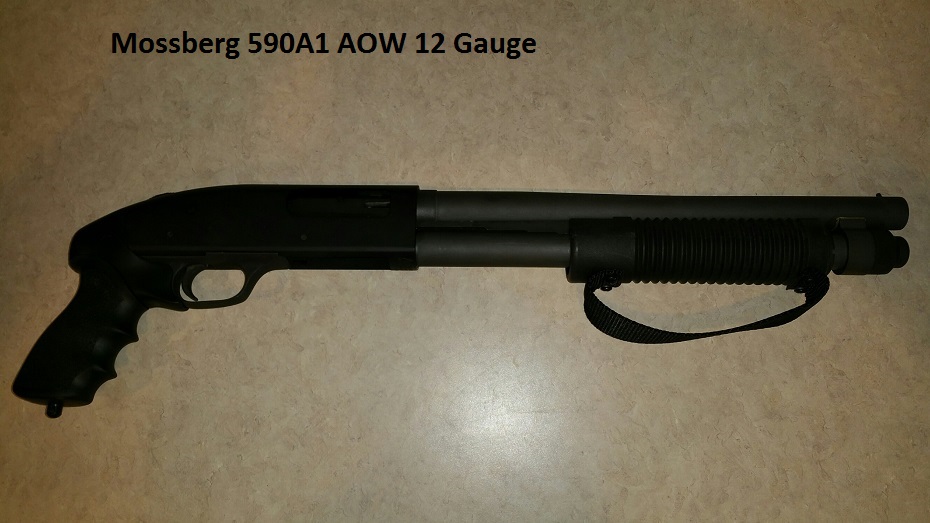 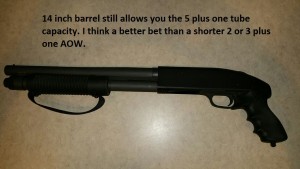 Shooting: It’s a pump shotgun…and a Mossberg…so now 97% of people in America who are into guns know all about it. There’s just not that much to say, it feeds and fires with the total and utter reliability that generations of American shooters have come to expect from a Mossberg. They are my favorite brand of gauge.

I don’t feel like the shorter barrel opens the shot patterns up much if at all. You can miss with this shotgun just like any longer one. The report is noticably louder and the recoil is a tad more than a 20 inch pistol grip gun but not so much as to make it difficult to shoot. All in all it’s anti-climatic, end of range report. 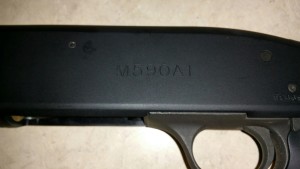 The Gun: It is military marked with the 590A1 on the receiver. So it has a few upgrades to pass military standards. The most noticable one is a metal trigger group, all my other Mossy’s are plastic. The total length of this AOW is 23 inches.

I put the Hoque Recoil Reducer pistol grip on it. Best pistol grip I have ever used. Its soft and does its job, it is also angled a bit better and gives you more to hold onto. So that translates into easier to wield one handed, get one, they’re great. 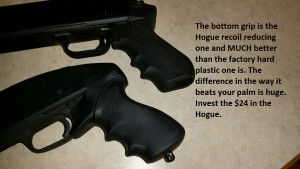 It is handier than the 20 inch Mossberg, I give it that. Cutting off 7 inches off the front and losing 2 shells does make the thing light and easily wielded one handed. I thought about getting a shorter one..like maybe a Serbu or one of the other Super Shorty’s but I wanted the capacity. This short Mossberg still has a five shot tube, so with one in the pipe that makes six.  I passed on a shorter one because they are like 2 plus 1 or 3 plus 1 and a total of as little as 3 shells in my gauge just doesn’t inspire confidence in me in the event of an home invasion with multiple perps.

Where I think this thing might shine is for back packers and hunters. It is lighter and easier to carry, so for back packers, in a scabbard on the side of your pack you could reach right over your shoulder and draw it in the event of an animal attack or some other problem. This one from Voodoo is the one I intend to buy. 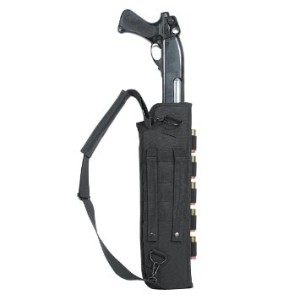 It should fit a bit deeper being a shorter gun.

I think for hunters, when you are dressing out that big ‘ole elk you just nailed and your 300 win mag is leaning against a tree 30 feet away and Mr. Hungry Bear shows up looking for his cut of the take this light weight short little gem might just save your ass. It’s small enough to carry around in the field without being a hinderance and can hold 6 bear killing slugs…thats better than any pistol I can think of including the 500’s and 454’s. Not too mention it costs WAY less than either of those two big boy revolvers. So a back up gun for hunters is a possible use.

Let’s talk briefly about the “radar”. Some people want to be under it and don’t want anything to do with NFA firearms, that’s fine, I understand that. If I were only planning on this one NFA item I would have skipped it too. For me, since I got that Trust, I’m in 7 suppressors and waiting on a couple of SBR stamps to come back now. So I was already “on the radar”, if there even is a “radar”. In the end I don’t really know if anybody pays extra attention to us?? If they do I haven’t noticed it. I’m not sweating it, my paperwork is in order and no black choppers over my house or listening devices in my cheese like “Paranoid Rob Lowe” on that Direct TV commercial. 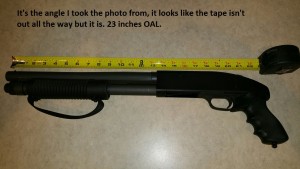 So lets wrap up: It’s shorter, lighter and a bit handier. It has a cool factor because it’s shorter and lot’s of people seem to gravitate towards it. It is still nothing more than a Mossberg 500 that you can’t put a buttstock on (illegal, AOW is pistol grip only)…that’s it. It doesn’t do one single thing that’s much more impressive than an 18 or 20 inch pistol gripped gun does. All it does is cost more and take longer to bring home. I like it though and for a $5 Tax Stamp, $115 extra and five months of wait time I’m glad I got it.