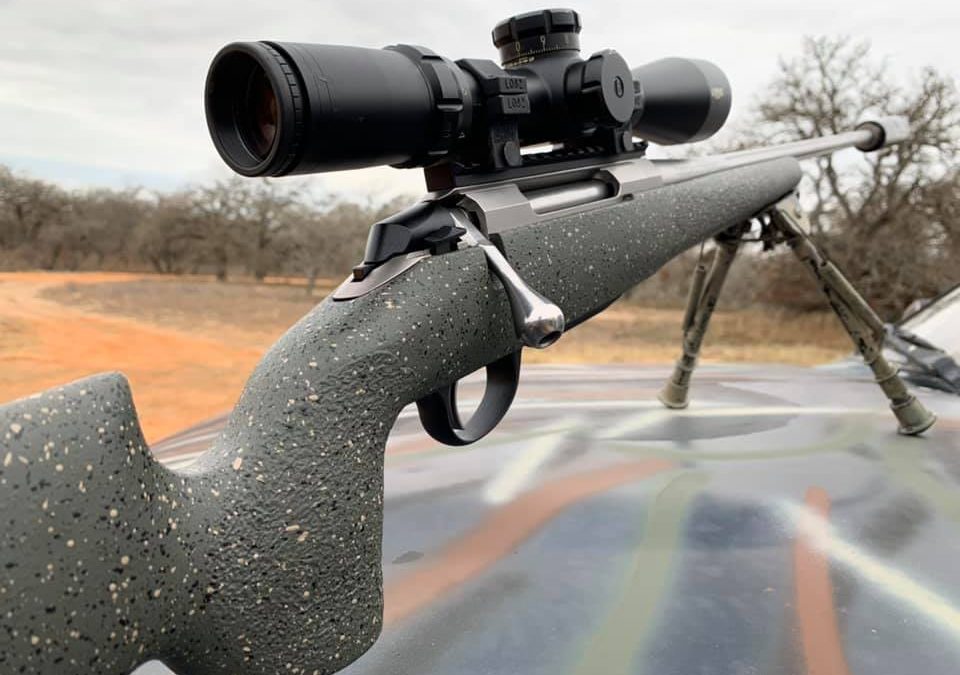 While I have all the guns I need for just about everything I do I was missing a higher power hunting rifle. I needed something for Elk or Nilgai. I considered the 7 mag, 300 WinMag and 300 WSM. With the heavy bullets the 7mag is a great round and I can still shoot lighter stuff for a fast and flat gun for Texas. I have owned numerous Tikkas and all have shot VERY well out of the box and is the only factory rifle I don’t feel compelled to immediately replace the trigger. I came across the Superlight version with a fluted barrel and bought it. At the same time I contacted McMillan and they had a carbon fiber game hunter in stock. Within a few days I had both in my hand. I sent the barreled action to my buddy Morgan at Class 3 Machining in Dallas. He is the only guy I let thread a rifle or do a cut/thread. I installed the rifle in the stock and as expected it was a perfect fit in all regards. I love the vertical grip they use and now own 4 of their stocks, 3 hunting rifles and one for long range/competition. Just as I did on my Tikka 308 project I didn’t bed the action to see how it shot before deciding if it needed to be done. My first 3 shots at 100 yards with Hornady 162g ELDX were almost cutting one hole! I was also very pleasantly surprised at the lack of recoil. I know the stock and silencer (Crux Nemesis30) both helped mitigate recoil but I was really surprised at how little it kicked. I grabbed a 175g ELDX round from Black Hills and fired one to see what it felt like and where it impacted. Man, really no perceptible difference and the round impacted right with the 162 load. I went through a few more ammo type I had and they all were impacting damned near the same, sub MOA for all of them. Wow. Next I went out on the property and setup a target at 325 yards, used Hornady’s calculator app on my phone with the factory ammo selection and sent two quick rounds at a target both impacting about an inch group. This was across the hood of my truck, I wasn’t shooting for groups per se, just verifying the data was elevation correction was right. I started to go back to the lodge figuring it was good enough to hunt where I wanted that evening but changed my mind and headed to another spot with I knew there was a good backstop and around 450 yards. I scanned the “berm” and saw about a fist sized rock and hit the range button on my Leica binos, 433 yards. Wind was gusting from left to right, I figured around 10 mph. I ran the calculator, dialed and held about .5 mil into the wind and squeezed the trigger. Rock vaporized. I saw another one and did it again. Sweet. Good enough for hunting today. I went to a blind with typical ranges of 300 yards with out to 500 possible. I had a young buck out at 500 and several other does and a few bucks out the other direction at 3-350. Finally, right before dark a good shooter doe came out and presented a perfect broad side shot at 300, dialed, squeezed the trigger and it was game over. Round impacted behind the shoulder and exited far size slightly farther back with about a 1.5″ hole. Deer ran about 60 yards. Still amazes me that a deer can take very lethal hit and run a bit sometimes. This was an open field with short grass so I wasn’t too worried if they ran. If this had been a trophy buck I would have sent it through the shoulders. I had an opportunity a bit earlier with a doe at the tree line but it was going into the tree line and as thick as it is in there I didn’t want to have to go and find it, it can be very challenging even if they only run 75 yards to find them as they can turn and not go the direction you think they went. I believe this is our 10th season out there and I have not lost a deer yet and want to keep it that way. In short, I am VERY happy with this rifle and can’t wait to do some serious range time out to 600 yards. I plan to hunt more with it and might have a chance at a Nigai cow in the next month or so.