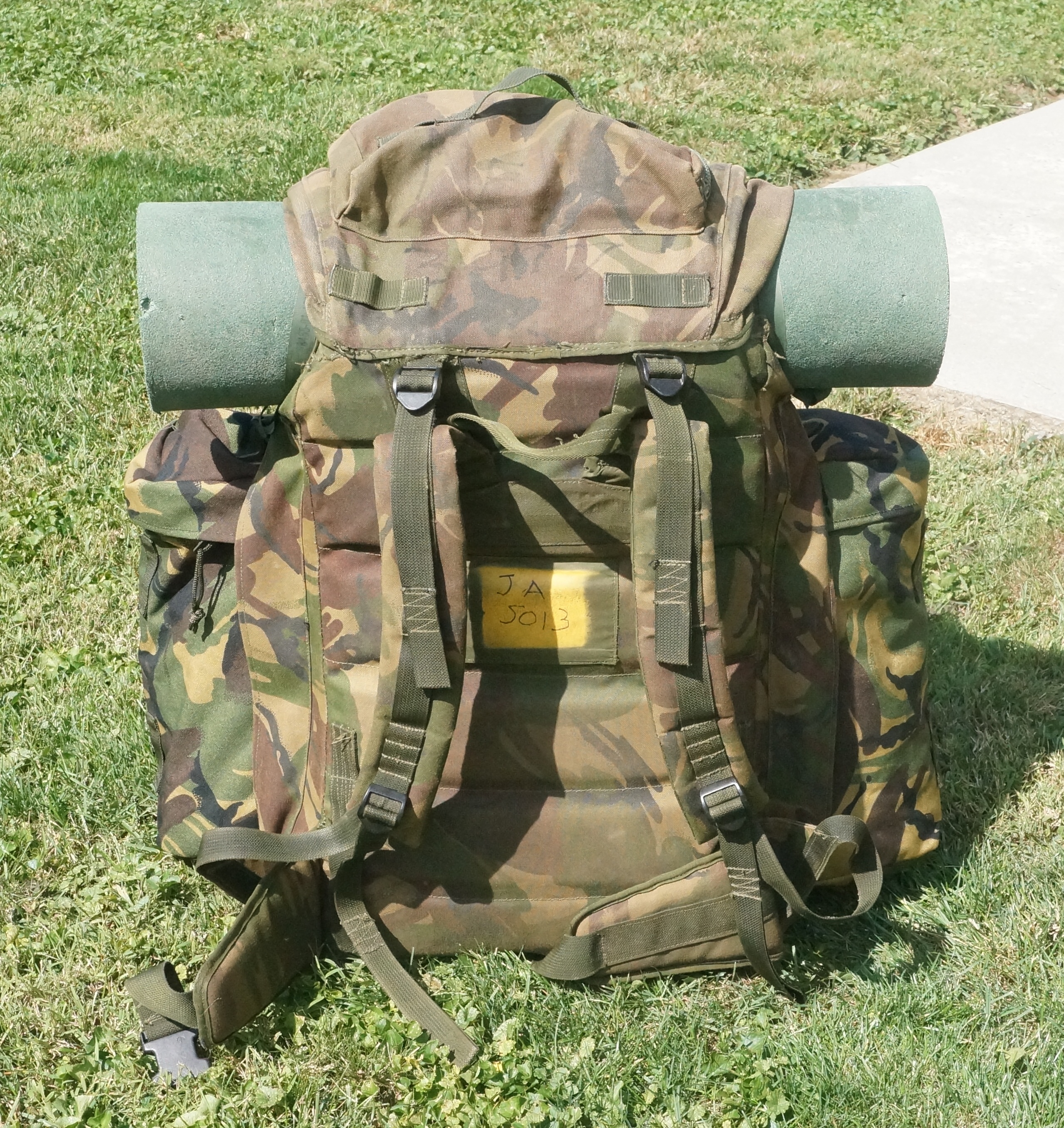 I’ve been lusting after a British Short Back PLCE military bergen for about 9 months now.  Just a clarification of terms, “bergen” means the same as backpack. PLCE stands for Personal Load Carrying Equipment. Think of it as the British equivalent of our old ALICE system. I’ve tried everything to replicate on, from a medium alice to a ILBE Marine pack.  Nothing has worked quite like I wanted to. The ILBE is just too damn long, meant to be carried like an alpine rucksack and transfer the weight of your load to your hips via its padded hip belt.

The ALICE is decent, but the frame is a bit too long to sit on top of webbing. When I try to The MOLLE II rucksack came close when I shortened it up, but I didn’t care for the external plastic frame. As for the ALICE? Well, I’ve tried a mixture of MOLLE and ALICE parts, including chopping up an ALICE frame. No success just yet. I needed a Short Back PLCE bergen.

However, these bergens are very expensive to import from the UK. I found a surplus British PLCE Bergen available from Billings Army Navy surplus, all the way out in Montana. I called them up and asked if the packs were the Short Back or Long Back versions. They weren’t sure, and couldn’t find any markings on their stock, so I took a chance and ordered one.

With trembling hands, I opened the package. Sadly, this is not a Short Back, but a Long. Short Back bergens have five horizontal ribs of padding on the back. The long back has six. It is not the bergen I was looking for.

It’s important to note that Zach over at Billings Army-Navy had gone the extra mile for me. He had a half-dozen of these packs on hand and I’d requested the shortest, fattest one. He did just as I’d asked, for no extra charge. He went through their stock and picked out the cleanest, shortest, fattest one, including a hand-written note with the order. 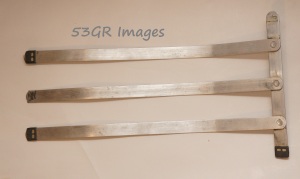 The internal frame of the PLCE Long-Back Bergen

The point is to have a short, squat pack that will rest on my MOLLE battle belt the way that British troops’ bergens rest on their webbing. This allows you to carry a large rucksack while still keeping your load-carrying system on you for combat. The bergen resting on your webbing will transfer some of the weight to your hips, but not so much as to push your belt down. The long back version was made for British soldiers who were over 6 feet tall. Since I’m only about 5’8″, I figured I needed a Short Back.

Now, conjecture is fine, but here at Tactical Gun Review, we rely on actual testing and evaluation.

It’s immediately apparent that this pack has been used. The reason that Zack hadn’t been able to read the tag is that it’s so worn as to be unreadable. There are a few very small patches at the bottom of one side and the stitching on the carry handle at the top of the shoulder straps has seen better days. Not overly concerning, as this pack is built like a tank.

The previous owner’s name and unit, stenciled in black sharpie, have been crossed out. The camouflage pattern, called Disruptive Pattern Material (or DPM), is faded. Well, it is on the main body of the pack. 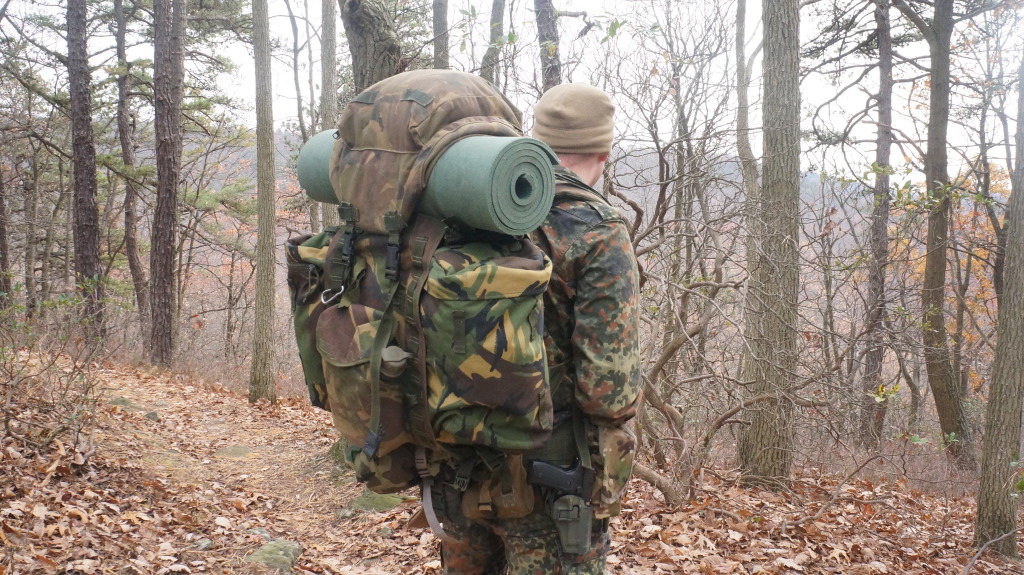 The side pockets,  (also known as “rockets”) are’t faded at all. This is because they’re not British military issue. The ones included are made by Mil-Tec and are not fully compatible with the British PLCE Bergen. The British military Bergen has MOD (Ministry of Defense) standard side-release buckles. They will interface with the newer buckles that come with the Osprey Mk4 armor carrier I recently reviewed. The buckles on the Mil-Tec side pouches don’t work with the British ones, which is a bit of an oversight on Mil-Tec’s part. Seriously, how hard is it to include the correct buckle in your product, so that it’s compatible with the original military issue product?

With a little more research, I found that this combination of reproduction and original is going to be common at pretty much any shop in the United States. Sturm Mil-Tec USA actually imports the rucksacks and then sends them to surplus stores. The picture from their site (showing the brighter-colored side pockets) can be found on other surplus sites. The one site I found that didn’t use the stock image was a shop in Canada, that charges $50 more.

Anyway, the pockets aren’t a big issue with the bergen, as the pockets’ primary method of attaching to the sides is via heavy-duty zipper. These two pockets will zip onto each other, and with the included straps, make a handy 20L day bag. 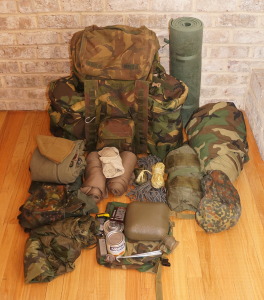 Carrying capacity is a huge consideration when looking at a rucksack. If you’re just looking for a short assault bag, you can be happy with a Marine ILBE assault pack or a medium ALICE pack. The ILBE assault pack carries 24 liters (15oo cui) and is handy for short excursions. A Medium ALICE pack is about 46 liters (2800 cui), while a Large ALICE is 62 liters (3800 cui). The MOLLE II rucksack main pouch is 65.5 liters (4000 cui), and the sustainment pouches on the sides add more than 8 liters each, for an impressive total of 82 liters (5000 cui).

The USMC Improve Load Bearing Equipment main pack has a 74 liter (4500 cui) capacity, though you can add another 8 liters for the pack lid. This puts it right there neck-and neck with the MOLLE. If you were to add sustainment pouches to the side via MOLLE webbing, it would raise the volume to a whopping 98 liters.

The British PLCE Bergen blows all of these packs away. The main pouch is a full 100 liters  The volume of the bergen is impressive. Even without the two side pouches, it’s a full 100 liters (6102 cubic inches). With the two side pouches, it’s a staggering 120 liters (7322 cui). And believe me, if you load this thing up to capacity, you will be staggering.

Last weekend, I loaded up the Bergen and headed out to a local trail. We headed up the path (with TJ humping the German Kampfrucksack on top of his old ALICE belt). I had roughly 20 pounds (9kg) on the belt kit and another 45 pounds (20kg) in the Bergen. It wasn’t long before I started feeling the weight. 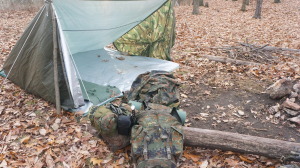 The PLCE Bergen is covered by a flecktarn shirt. This was our campsite. Very basic, especially since it was 30 degrees that night with howling wind.

The padding on the shoulder straps is rather light, not quite enough for large loads. In addition, the Bergen lacks a sternum strap, which would have been very useful on the ascent up the ridge. When dropping the ruck, I took particular note of the lack of quick-release buckles on the bottom of the straps. Like the Marine ILBE, the Bergen is an internal-frame pack. This can lead to a very sweaty back, but keeps the load closer to your body. Of course, this leads to a sweaty back.

The waist belt isn’t used like the hip belts of a ILBE or a MOLLE rucksack. It’s not cinched around the hips to transfer weight to the legs. Instead, it rides above the webbing and the waist belt fastens around the lower belly. It does quit a good job of stabilizing the pack, which is its purpose. This, combined with the wide pack base, sitting on the utility pouches on the back of my battle belt provides steadiness even when moving over rough terrain.

And you know what’s crazy? The Long-Back did just fine. It fits well on the battle belt, though maybe that’s due to me wearing it so low on my hips.

The PLCE Bergen is a unique and hardy rucksack. It has a mammoth amount of space and can be loaded with everything but the kitchen sink. Though slightly less comfortable than more modern alpine packs, it allows the wearer to use a belt-and-suspender kit, which is of particular importance to me.

There are several improvements I’d like to see in the Bergen:

Interestingly, I believe most of these improvements have been implemented in the SAS/Para Bergen available from Military Ops. They still don’t have quick-release buckles, which confounds me. We’ve had them on our packs since the old ALICE rucks. Oh well, I’m sure those could be easily added.

– By Allen Cosby and TJ