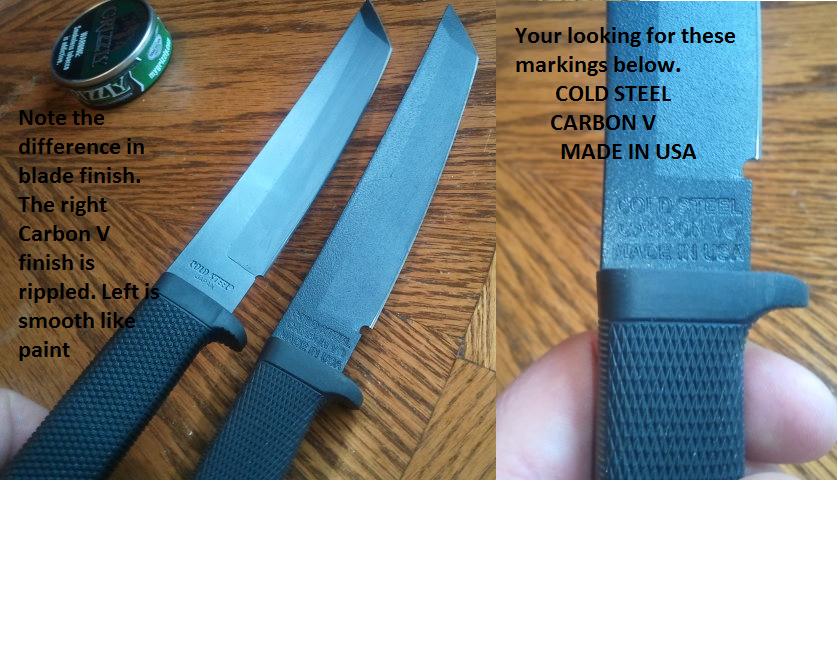 Today I want to talk about utility/field knives. I have used a lot of knives over the years in uniform, folders and fixed blades alike. Many brands too. I have some that I really like and some not so much. I’ll address a few others in other reviews but today I want to talk about a knife that I think is an all around great field knife at a price everyone almost can deal with. The Cold Steel Recon Tanto. It’s tough, sharp, reasonably priced but there is a catch to getting one of these.

First of all let’s discuss the uses of a knife as it will lead into why I like this model from Cold Steel as much as I do. I’ve got bad news for a lot of “commando super operator” types out there. YOU ARE NOT GOING TO STAB ANYONE!! It’s just not going to happen, sorry. I know that hurts but it’s true. The days of fixing bayonets against the enemy are over. I know of 1 knifing in 3 years in Iraq. The news came second hand from a buddy and seeing how the knifer is in prison for it and the knifee was an Iraqi soldier who was supposed to be on our side (but probably wasn’t) that sounded more like a murder and less like a combat situation the way I heard the story from a buddy who was there. So in that amount of time, hundreds of thousands of troops came and went and untold numbers of patrols and combat action with no knifings anybody knows about. Even if you are one of the .0000001% who REALLY is a “commando super operator” guy then you already know your units TO&E includes suppressed weapons. No need to silence that sentry with a blade anymore. Now if you happen to be the 1 in 10million guy who does have to stick somebody then any old sharp object will do but safe to say that knife fighting does NOT need to be at the top of your worry list. A good knife needs to be up to field/utility tasks because that’s all you’re going to use it for.

So what kinds of field tasks might you need a knife for? On the modern battlefield or out hunting, camping or shooting?? Well there are a million of them. Most of them pretty mundane, opening ammo crates, cutting metal banding on gear or supplies, wires sealing ammo cans, MRE preparation is a big one, digging, pounding in tent steaks, stirring stews or flipping of meat while camping, fire poking, climbing up steep places with no foot or handholds, prying, opening stuck car doors and locked trunks, searches of possible enemy houses (more prying and cutting open mattress’s/furniture and so on), scraping large deposits of carbon off of filthy weapons, cutting gear off wounded/dead people so you can move them or get them loose from whatever they are hung up on. Same with cutting seat belts. Last and certainly NOT least the killing and dissection of large, scary indigenous insects and most of all throwing at makeshift targets when you’re bored out of your mind. So now that we’ve established what some of the things you probably will need a knife for what qualities are we looking for?? Prying and cutting metal will trash a junky blade fast. So it needs to be hard steel and sharp. Razor sharp?? Well it’s nice if it starts out that way but don’t expect it to last. I think a knife with a good utility edge and the ability to hold that edge will do just fine. We need a handle with a good nonslip grip, a point capable of withstanding abuse and able to pierce hard stuff. Some corrosion resistance is nice and a good sheath, one that securely and safely holds the blade but at the same time makes deployment of the knife relatively easy.

Enter the Cold Steel Recon Tanto: Like I said, a lot of knives (I have over 200 knives) and I really thought this one was great. I never broke or bent one. I have pried open locked trunks and stuck/jammed doors, used it to climb and all the stuff I listed previously. The knife is solid, strong and will do the job. The edge can be brought to VERY sharp but like I said it won’t last. It will maintain enough sharpness though to be good enough. The point really will pierce well without being ruined! It’s a tough knife. The kydex sheath is safe and with the older Carbon V model carryies and deploys nicely. It has a nonslip Kraton rubber handle and the ripply blade finish is tough and rust proof. I can’t say enough good things about it. EXCEPT!!

Here’s that catch I mentioned earlier. There are two kinds of Recon Tantos. The older one made in the USA and the new one made in Japan. They’re easy to tell apart but we’ll get to that in a minute. Cold Steel has in my humble opinion gotten away from the quality standards they used to have. Sorry, but that’s what I think. I have gotten some REALLY nice stuff from them and then some stuff that you can’t believe they put their name on, even flimsy stuff made in China. They changed the blade steel and the sheath. The steel now is AUS-8 which is Japanese stainless. It’s not terrible steel by any means but it’s softer than and therefore not as tough as the previous Carbon V steel they used in the earlier model. It has chromium in it so it’s a stainless with less carbon. Previously the thing was made from “Carbon V” steel (a Cold Steel trademark name) and while it was a bit likely to want to rust it was much stronger. Harder to sharpen but held the edge better. Also it was made here and not in Japan. So the differences: The sheath on the older one will retain the knife without using the snap as the knife locks in with tension. The older blade has a black ripply finish and the new one is smooth as if it was spray painted. The new one won’t stay put in the sheath without using the snap. They are easy to tell apart by the markings on the blade. The good one says Carbon V Made in the USA. The lesser model says Recon Tanto Made in Japan. Get the USA made one! If you had them to feel side by side you can feel the difference. The USA made Carbon V knife  just feels much tougher and better made. They are no longer in production here so you will have to go to eBay and find one. I checked and they are still available around $100.   Made in the USA and tough as nails. Just search “Carbon V” and you’ll find them.

Wrapping up, if you need a good field/utility fixed blade and don’t want to spend as much as a new gun then this Cold Steel older model of the Recon Tanto made from Carbon V steel here in the good ole’ US of A is the best thing I have ever used. I wouldn’t be without one in the field. It easily out performs any Marine Corps K-bar I have ever had. Great knife! It’s tough enough for most anything you can expect a knife to do. Get on eBay or watch the gun shows and pick yourself up one. It won’t let you down.