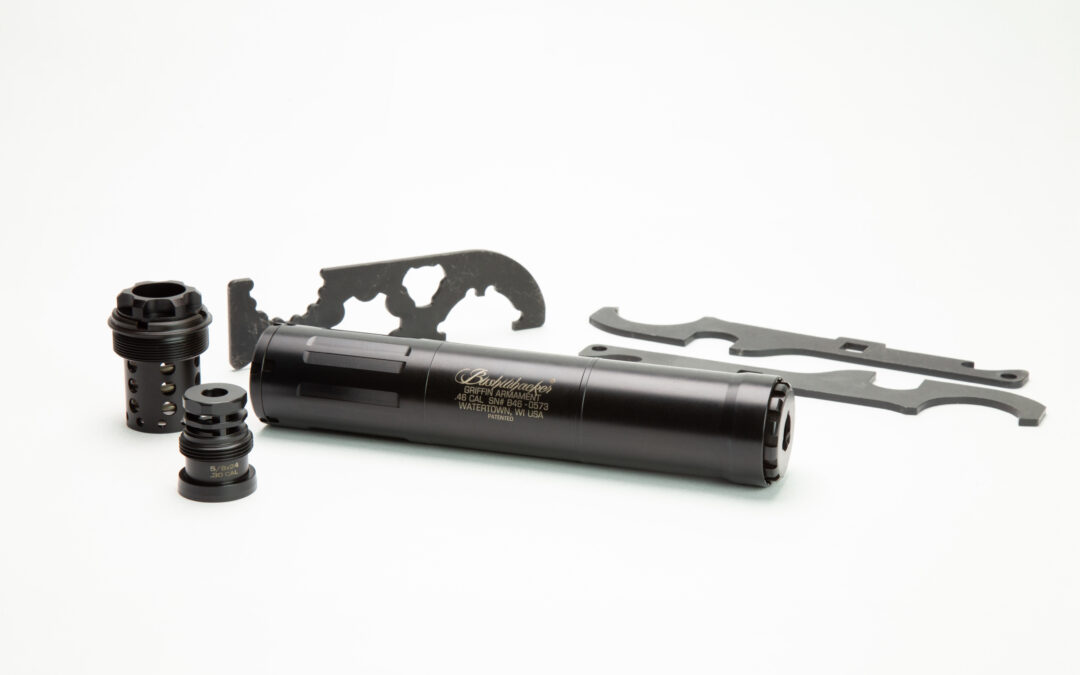 The Griffin team is proud to introduce the new Bushwhacker® 46 (gen 2) universal suppressor.  Many consumers are looking for a multi-function tool for a first suppressor.  The ability to use the product across pistols, rifles, and other firearms has been the major focus on product development in this market category.  Griffin recently re-designed the fan favorite Bushwhacker® 46 to be lighter, shorter, more durable, higher performance, and even more versatile.

“It’s a long list of upgrades, but they are real.” Said Austin Green, primary owner and lead engineer at Griffin. “The most notable improvements to the unit are the integration of a new baffle system that I have been working on for quite some time, and the Universal QD Piston System. Both of these improvements mark notable intellectual property improvements to the suppressor space, and I’m happy that we can provide them to our customers.”

The Bushwhacker now comes in shorter at 7.75”, lighter in all configurations, and boasts sound performance numbers 5-7db lower across calibers. The new silencer swaps titanium baffles for H900 heat treated 17-4 stainless steel ECO-FLOW™ baffles, which improve flow through the system, decrease back pressure, and drop sound pressure levels substantially.  The switch to stainless steel baffles also means better durability, and longer service life.  The patented Ratchet-Lok™ end cap system is unchanged from the previous version, allowing users to fully disassemble their suppressor for cleaning and maintenance.  The new gen 2 units are able to accommodate the new Universal QD Piston System, which is going to be released in more detail shortly.  This system allows rapid and secure attachment to tilt barrel pistols by way of a 3 position QD interface. Users can select one of three, 120-degree separated attachment positions.  There are no false positives in the system like prior art examples of QD mechanisms of years past. There is also a taper in front of the device that interacts with and locks the suppressor (piston) in place ensuring that possible baffle strikes and end cap strikes, common to pistol suppressors are nearly eliminated.  Griffin is also releasing a 1.375×24” A2 adapter alongside the Bushwhacker® 46, further showcasing its versatility for the AR community.

The Bushwhacker® 46 is currently shipping nationwide to all Griffin Armament dealers and wholesalers.  For more information visit www.griffinarmament.com

Expect to see it soon at the Silencer Shop