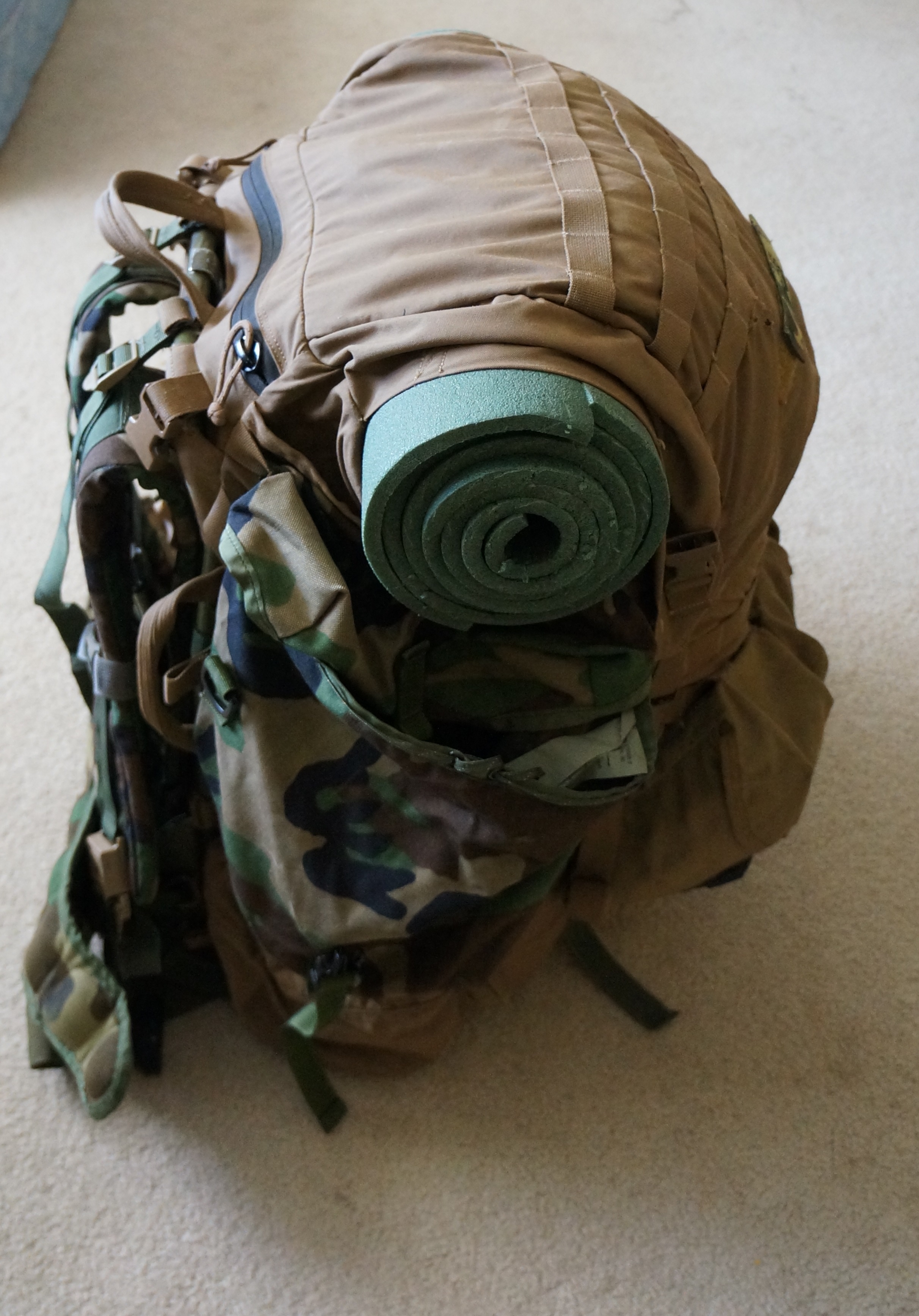 What is a DevilCat mod? It’s what happens when you take some new USMC hardware and upgrade an ALICE pack.

I’ve been playing around with ALICE packs for a while now. I love the Medium ALICE, especially the woodland pattern radio pack case version. However, it isn’t big enough for an overnight hike, especially in the winter.

As part of a large purchase from Lee Surplus Outlet, I got a used FILBE main bag. It’s part of the FILBE rucksack the Marines now use. The interesting thing about this new rucksack is that it fits on a Down East 1606 airborne assault frame, which can also take an ALICE pack. In fact, these frames have been used for a while by ALICE enthusiasts as a lightweight alternative to the hold frame.

Alternately, the FILBE main bag can fit onto an ALICE frame. Since I had one lying around, I decided to make myself a frankenpack. I mounted the FILBE bag and set it up with ALICE straps and an ALICE kidney pad. This proved to be less than comfortable. Unfortunately, the FILBE does not have padding on the frame pocket, like both the Medium and Large ALICE packs do. So I replaced the ALICE straps with woodland MOLLE shoulder straps, which have much better padding, including back padding in between the wearer’s back and the frame. To round it out, I added a MOLLE hip belt as well. The result is a much more comfortable pack.

Those of you who have experience with ALICE packs are probably saying, “That’s just a Hellcat mod pack!”

And you’re right. That’s why I call this the DevilCat. Here, you can see the lower compartment. I used a Primary Arms flecktarn stencil to add some camo to the the pack.

The FILBE pack, with its zippered access to the lower compartment, means that you can have your sleep system right there in your ruck and get to it without having to dig out all your other gear, as you would have to with a Large ALICE pack or an ILBE pack. Now, I know that the MOLLE II Rucksack has this feature as well, but let’s be honest; the MOLLE ruck is kinda crappy. It only incorporates a single compression strap for the sleep system compartment, the side compression straps are awful, the drawstring closure is no better than an ALICE pack and the pack lid is floppy and generally useless.

I don’t like the MOLLE II rucksack. Luckily, the FILBE is about a million times better. It incorporates two compression straps to snug down your sleep system (sleeping bag for you non-tactical people). The zipper is much nicer than the giant-toothed MOLLE abomination. Inside the sleep system compartment, there’s a compression strap that allows you to tighten down the sleep system while it’s inside, so that it doesn’t try to poke out of the zippered compartment. View of the top of the FILBE pack. Here you see the zipper which allows for access to the radio pouch without even opening the pack lid.

The FILBE has four, well-placed side compression straps. The lid has an interior compartment that’s accessible either from the outside or from the inside (like when it’s open). Furthermore, there is a water-resistant zipper that allows you access to the top  of the bag  without needing to even open it. The feature I like most about the lid is that its sides incorporate an elastic cord, which allows the lid to hug an object placed between it and the pack body. This is great for those of you who carry a sleep pad out on hikes.

The pack closes via double drawstrings, and incorporates a storm collar, which is a definite improvement over the ALICE and MOLLE packs. Inside the main compartment, there’s a radio pocket, reminiscent of the ALICE pack. I place my canned goods (the heavy items) here so that they are closer to my body and therefore don’t throw my center of gravity off as much while hiking. Also included is a compression strap that fits over the top of your load inside the top compartment.

Though the FILBE pack doesn’t have the external pockets of the ALICE, a large area is covered with PALS webbing, allowing you to attach whatever pouches you want. I placed a woodland MOLLE sustainment pouch on the side, which increases the capacity by about 9 liters. Along the back, I placed three USMC IFAK pouches, which now hold bungees, 550 cord and a Katadyn water filter. Like the ILBE, the FILBE has elastic pockets at the base of the sides. I can easily place my 2-quart canteen in a pocket, which is a nice feature to have. DevilCat with a FILBE assault pack clipped on top.

For those of you who like the ALICE, you should upgrade to a FILBE main pack. Seriously, it’s only a little over $20 from Lee Surplus Outlet. You’ll need to improvise some buckles and straps, but any self-respecting gear addict should have a bag full of those.

Disclaimer – Yes, I linked to a massive number of items sold by Lee Army Surplus. I did it because they’re a great store and sell good gear cheap. Check them out, and don’t be afraid to call them up if you want combined shipping or are looking for something special.