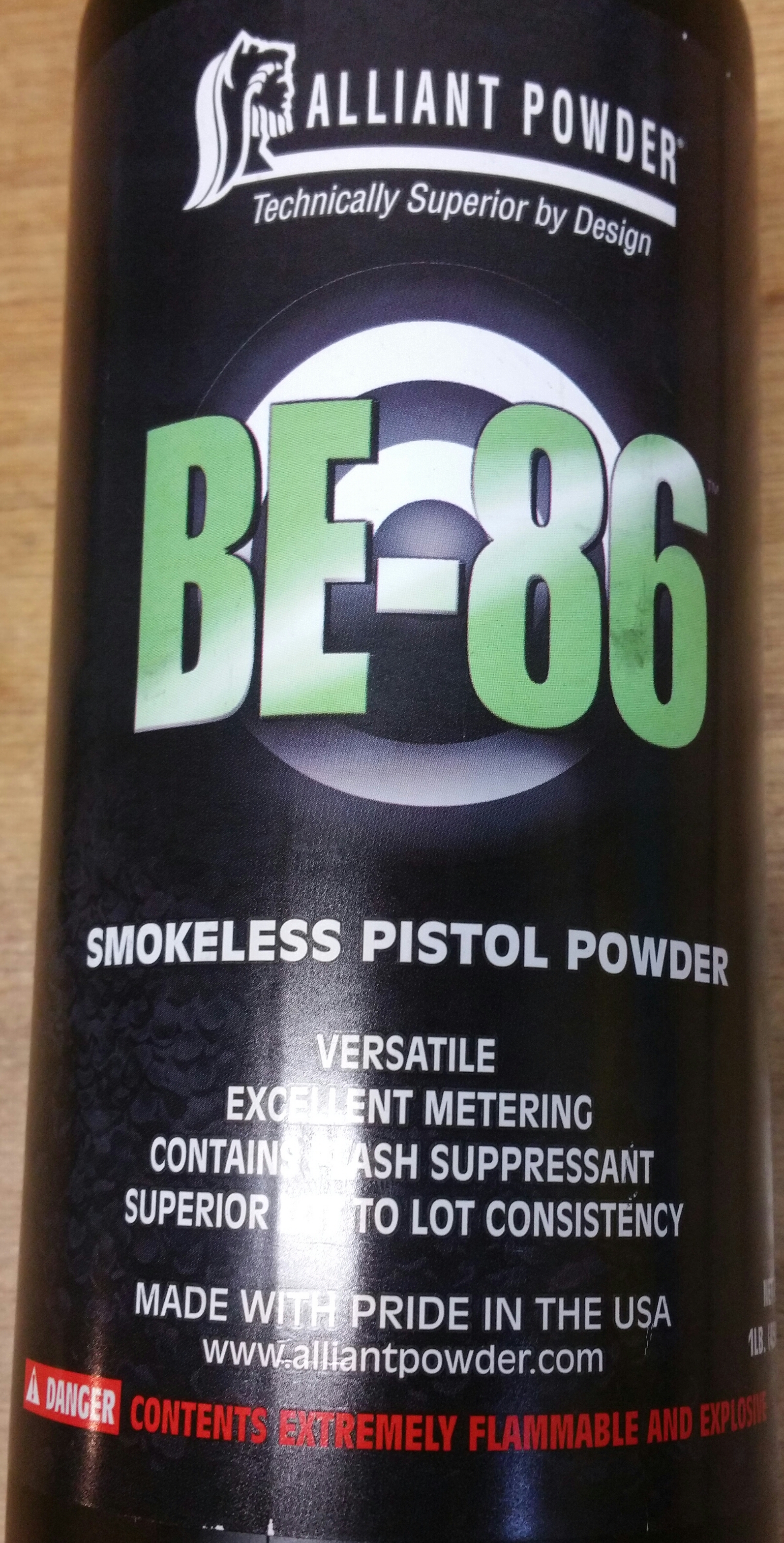 About 2 months ago I asked my main man Smiddy at Johnson Sporting Goods in Adrian MI. for a good powder for high velocity pistol that was flash suppressed. He recommended trying Alliant’s relatively new BE-86, he said to think of it a lot like Power Pistol without all of the flash. Sounds perfect. I like Alliant’s Power Pistol, it is my go to powder for all of the cartridges I reload from 380acp all the way up to 460 Rowland, once I hit 44 magnum I switch to H110. BE-86 is a newer powder, so not a lot of data to go on out there, here is a few 38 Super and 10mm loads I’ve been working with and what happened. 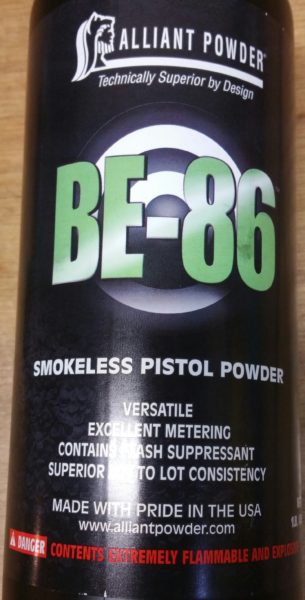 Let’s start out with a bit on my mindset on reloading. Mostly I reload because I can make more accurate ammo than I can buy. There is nothing like tailor making a rifles perfect recipe. I could care less how fast they are, I just want to see ragged holes in my paper. Now on the flip side of that coin there are 2 pistol cartridges that speed is of the utmost importance. (obviously I still want to hit the target) The 38 Super and the 10mm, I want all the speed I can get. I didn’t buy a 10mm because I wanted to shoot 40 S&W powered loads in it and I didn’t buy a 38 Super with a supported chamber because I wanted 9mm power. I want all the cartridges have to offer.

So, that having been said it’s time for my liability clause. 1. THIS DATA IS FOR INFORMATIONAL PURPOSES ONLY. 2. IF YOU CHOOSE TO TRY THIS AT HOME YOU ASSUME ALL RISKS AND ANYTHING YOU BLOW UP, INCLUDING YOURSELF, IS ON YOU. 3. I HAVE EXCEEDED ALL MANUFACTURER RECOMMENDATIONS…I AM NOT SUGGESTING YOU DO THE SAME. Ok?? I pretty much threw the book out on this one. So whatever you do at least make sure you have a fully supported chamber and a stiff recoil spring. My early 70’s Colt Combat Commander in 38 Super will never see loads over book specs. The test gun for the Super loads has a fully supported chamber.

This is a great pistol, super accurate, reliable and built like a tank.

Let’s get down to business here. All my brass used is either Once fired Winchester +P or once fired Underwood brass. I use CCI small RIFLE primers in all my 38 super loads. That is because according to the research I did, too make “major power factor” the rifle primers take the pressure better.  Alliant says 6.9 gr BE-86 is max for a 124 grain JHP. I use Hornady XTP’s nearly across the board. So every last bullet in these tests is an XTP except for the 135 10mm which is a Nosler. They (Alliant) have the OAL listed as 1.26, I went shorter, which can increase pressure, so be aware of that. I went with 1.227 inches OAL. Start load was at 6.2 gr BE-86, I didn’t start chrono’ing until I got it up towards max, I was just getting the feel of it with the lesser charges. The velocities were as follows.

**This is where (7.3 gr) I would cut it off. Nothing gained with more powder and it exceeds Underwood Ammo speed. Underwood factory ammo clocked in at 1335 fps/490 lbs ME.

That’s what we got from the 38 Super, I say cut it off at 7.3 gr BE-86. Because I used rifle primers, watching primers for pressure probably won’t tell us anything and it didnt, they looked perfect the whole way through. I mic’d some cases and compared them too sized ones, no reason to think I was way over the top. I am over the manufacturers top though, so again….start low and work up slow. Going on the micrometer but mostly my gut feeling, I feel fine shooting these. I realize “gut feeling” sure as hell isn’t very scientific, that’s why I urge caution.

Nosler 135’s. I didnt even really want these but the day I went bullet shopping for 10mm that was all there was at the time.

10mm Load Data: Again, all once fired brass, mostly Winchester and Underwood. I used a CCI Large Pistol Primer and 3 different bullets. On the lite side we have the Nosler 135’s and then 2 from Hornady, the 155’s and the 180’s.

**10.8 gr might be a good spot to cut this off. I have read this bullet comes apart and is NOT as effective at higher speeds. I don’t know that for a fact though, just something I read. Will this load go up? Yes and we’re going to do it but it is a thumper for self defense of 2 legged predators at 10.8 gr.

155’s are not my first choice in 10mm bullets either but I wanted a variety for this article. 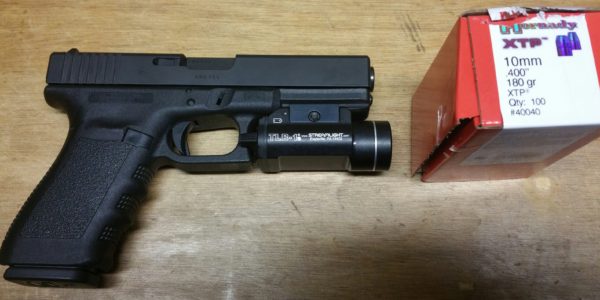 Now we’re talking, not a bullet I like more than these.

** Pretty good load at 9.1 and plenty of thump. It outran the Underwood factory load by a good 25 fps. I am stopping here.

Summary: So there you have it. I hope that this real data from a real guys gun helped you in some way, whether it be a place to start or what to realistically expect. BE-86 does live up to the flash suppression claim and would make a good choice for loads you may use in low light. I.E. Hunting, Carry or HD loads. I really like the flash you get from Power Pistol, it makes even lite practice loads more fun for people to shoot I think but for serious business I want as little as possible. 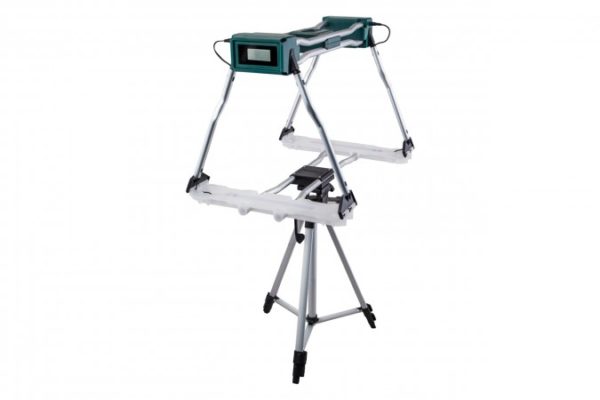 This has been a pretty good tool to have, The Caldwell G2.

On a side note I have been using the Caldwell G2 Chrono. I bought it from Ebay and have been pretty happy, I’ll have to review it sometime. I always check the thing out with a known load or 2. For example, my 230 XTP load for 45acp does 1035 fps, so I put a mag of those past the chrono and make sure I see 1035 or real damn close to it. If anything were to give me pause I might switch over to Underwood 180 XTP 10mm which always does about 1220 fps out of my Glock and test the chrono again. I really haven’t had any reason to doubt the machine. It seem to work well, rarely misses a shot and works the same whether it’s cloudy or sunny. Every once in awhile it will give you something crazy like a 2354 fps 45 acp. That’s the kind of thing that “gives you pause”. In all fairness that has been very rare and you know it’s dead wrong so just shoot again and forget it. I feel like the thing is pretty accurate.

Check back in the future, eventually you’ll see real data from real guns using more BE-86. As time goes by I want to try BE-86 in place of Power Pistol in all my loads. Eventually you’ll see data for 380acp (probably 90 gr), 9mm in 4 bullet weights and 2/3 barrel lengths , 45acp and Super in 185 and 230 gr and of course my personal fav 460 Rowland, which with Power Pistol I have 230’s screaming down range at over 1400 fps. Thanks for reading and train often.

Tactical Gun Review and Texas Outdoors Network are published by Coker Tactical, LLC. Coker Tactical is proud to be based in the Great State of Texas! We grew up in South Texas hunting and fishing with friends and family.