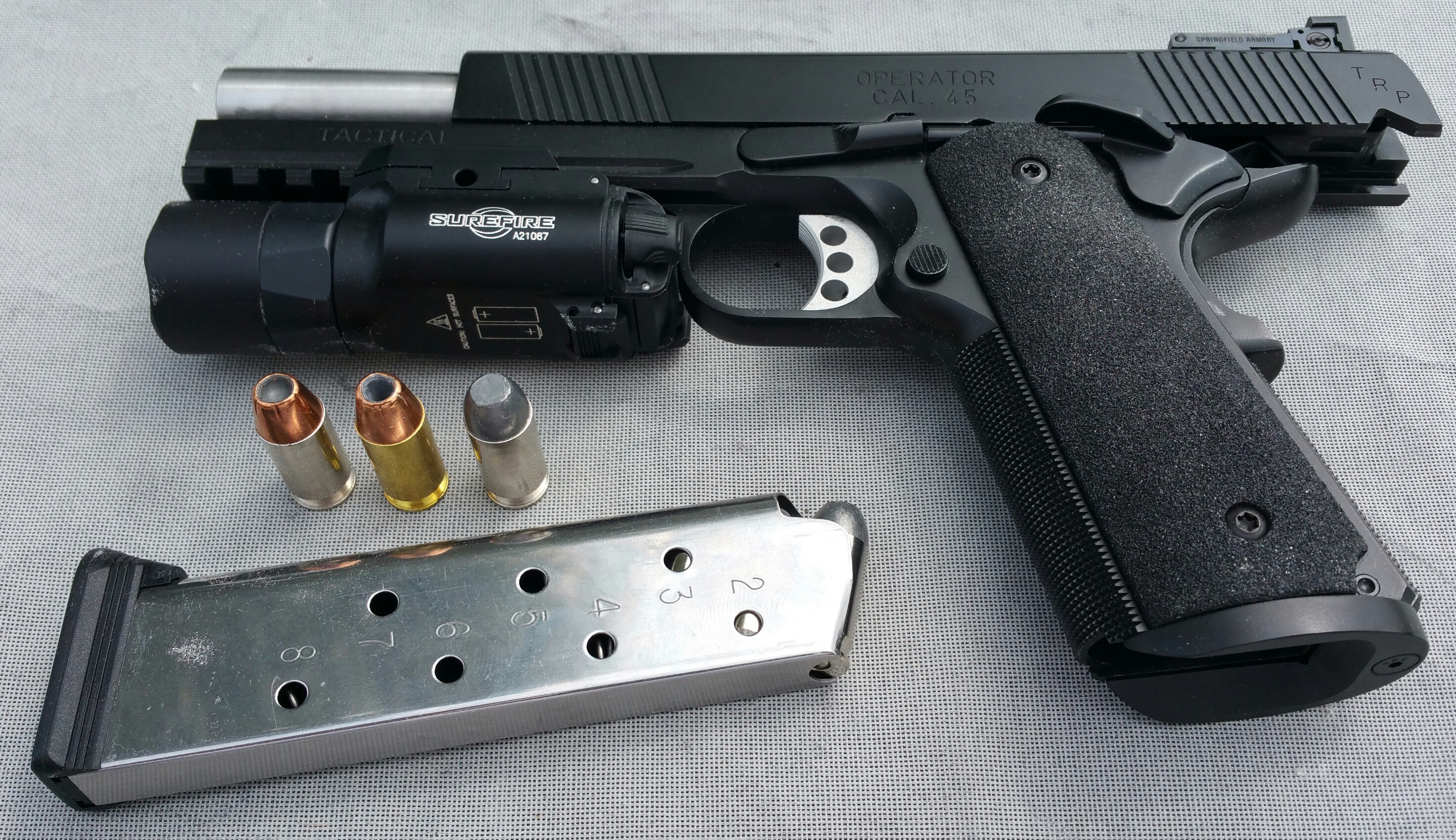 A while back I picked up a Springfield custom shop TRP Operator with the monolithic rail. I love the full length rail and the weapon is gorgeous and built to last. I was in my local dealer Johnson’s Sporting Goods in Adrian MI, they had a mint in box one come in on consignment for 1000$. It wasn’t out on the shelf yet but was on the website because my ole’ weapon light hating buddy Gary saw it and happened to walk in and asked to see it. I told him I would trample his dead “f’n” body to get it, if when they brought it out from the back, it had the monolithic rail. He put his hands up and said that would be unnecessary. It did have it and the second he passed on it I bought TRP Operator with the intention of shooting 45 Super from it. The Surefire looks like it was born there. Love that light on that weapon.

45 Super the Cartridge: Introduced in 1988, I wanted one bad back then but everybody thought it needed a 350$ conversion just to be safe. Being in my late teens and early 20’s when the cartridge was just getting going I didn’t have that kind of extra cash then. Now fast forward a bunch of years, now we have the internet and it still seemed like half of shooters thought you needed an expensive conversion. I’m looking at all kinds of older posts (2005ish-2010ish) and I read stuff like “44 magnum power”, NOPE, roughly 10mm power. You have to have this expensive conversion process or you will die a horrible, bloody death. No, you need a spring. No polymer framed pistol will ever survive the 45 Super: Wrong…That’s definetly way off base, we know now they even stand up to the 460 Rowland powerhouse. With this TRP Operator you need a 9$ Wolf  22 lb spring. End of conversion. You don’t need an extractor, ejector, jeweled barrel, firing pin stop…blah blah…you need a 22’ish pound spring and that’s all. I’ve even read dual recoil spring set ups as high as 32 lbs  being needed…32 lbs?? Holy Shit, a whole lot of people will need a special bracket for their log splitter just to rack the slide!! My first and second 460 Rowland kit shipped with  20 lb. springs if that tells us anything but it is comped. Another example is my Grizzly 44, basically an enlarged 1911 shooting full power 44 mag with a 27 lb recoil spring…. This 45 Super cartridge was made out early on to be a frag with the pin pulled and you have one finger on the spoon, it’s just not true. You’re getting stiff 10mm power levels at lower pressures and nothing more. I really don’t get the polymer frame won’t survive stuff and how all that got started, seeing’s how 10mm’s were already out. I shoot a lot of 460 Rowland out of a 5 inch XD and the 460 Rowland clubs the 45 Super like a baby seal. Not only does it survive but it does it with nothing more than a barrel, comp and a spring. Anyway, time has gone along and we learn as we go, so 27’ish years after I first wanted one I finally got around to doing it, this TRP Operator and a 22 lb Wolf spring. The Gun: She has a bull barrel and single piece full length guide rod. That makes it a giant PIA to take apart and assemble, especially with a 22 lb recoil spring. That is something I plan to correct someday, it takes 3 hands to compress that spring putting her back together and get the paperclip back in the hole. You do need the paperclip or supplied “takedown tool” I would call it to get it apart. Other than that and the grips are VERY aggressive it’s just a really nice 1911. You might feel like you’ve been holding on to a belt sander after an extended range session.  I also feel like the hammer spring is pretty stiff compared to others that I have but when shooting heavier loads like the Super I see that as an upside. In fact I have a Sig that when I get around to buying a recoil spring for that I will probably go up a pound or two due to the weaker hammer spring in the Sig. Anywho, we have an ambi-thumb safety and I would guess the crisp trigger somewhere in the 3.5 to 4.5 lb range. It has a nice beveled mag well, full length light rail, and topped off with fully adjustable night sites, the girl is a beauty. Oh, one last thing, I took the barrel, bushing, plug and guide rod out of my Wilson Combat reworked Colt and it dropped right in and shot fine with 45acp. So…if you wanted to go so far as to convert to 460 Rowland you can do it with a standard 1911 kit, you don’t need a bull barrel kit. In fact, if one even exists I’ve never seen it. Fairly rapid fire with 185 grain load. It’s a pretty stiff load, really like this one.

The 185’s: Well, a little bit of a recoil surprise, way less than I expected. I loaded them every other round with Hornady Critical Defense 45acp, while obviously stiffer than the 45 acp’s they were very easily controlled out of the TRP, follow up shots were a breeze. To me, the felt recoil seemed less than my Glock 20 with a similar powered load. The 45’s dropped 4 feet away and slightly to my rear and the Supers dropped 8 feet away at 3 o’clock. 255 HCFP, as a general rule my best grouping load but you have a hard time seeing that here.

My second magazine ever fired of Supers I loaded 185, 230 and 255 to be fired in that order. The felt recoil does increase with the heavier bullets but only a bit. They all ejected directly to my right and in the 8 to 11 feet range. The distance they eject along with perfectly good looking fired brass tells me all I need to know…a spring is all you need. I have not done any night fire with the Supers, so I can’t speak of flash yet but they do use low flash powder per their advertisement. The 255’s are hard cast flat point and smoke just like every other HC load I’ve fired from Underwood does. They are lubed and it is the lube burning off when fired.

Incidentally I have used strictly factory magazines from Springfield (7 rds) and Sig Sauer (8 rds) and both have been flawless feeders even with the 22 lb spring, I have not put heavier springs in any of the mags, they keep up with the slide as is. Since that first day I’ve enjoyed quite a few boxes of Supers. I like the gun and load but some super powered, about to explode in your hand, gun wrecking monster it is not. It’s actually pretty tame to those of us used to a steady diet of 460 Rowlands, 454’s and 500’s. If you’re not used to those kinds of guns then this will be a pretty exciting upgrade I think. Above pics are some pics of groups fired at various ranges, speeds and loads. All good enough for me.

Uses?: Do you need a use? I don’t…just the fun of messing around with something different and learning something new was a good enough “use” for me. It would make a formidable home defense gun for sure, back woods defense too I suppose if your creatures are not too gigantic. If I can’t kill it with a 10mm then I wouldn’t try it with the Super either. I could see some short range, medium game hunting perhaps, deer and what have you.

Summary: The pistol is sweet as is in 45acp, the Supers just add a bit of fun to it. For liabilities sake I won’t say do it…I’m just saying I dropped in a 22 lb spring and have enjoyed myself with the more powerful 45 Super with absolutely no reason to believe my TRP or myself are in any danger. I wouldn’t worry about the Doomsdayer’s saying you need a few hundred bucks worth of new parts, my TRP Operator has been just fine. As always thanks for reading and train often.