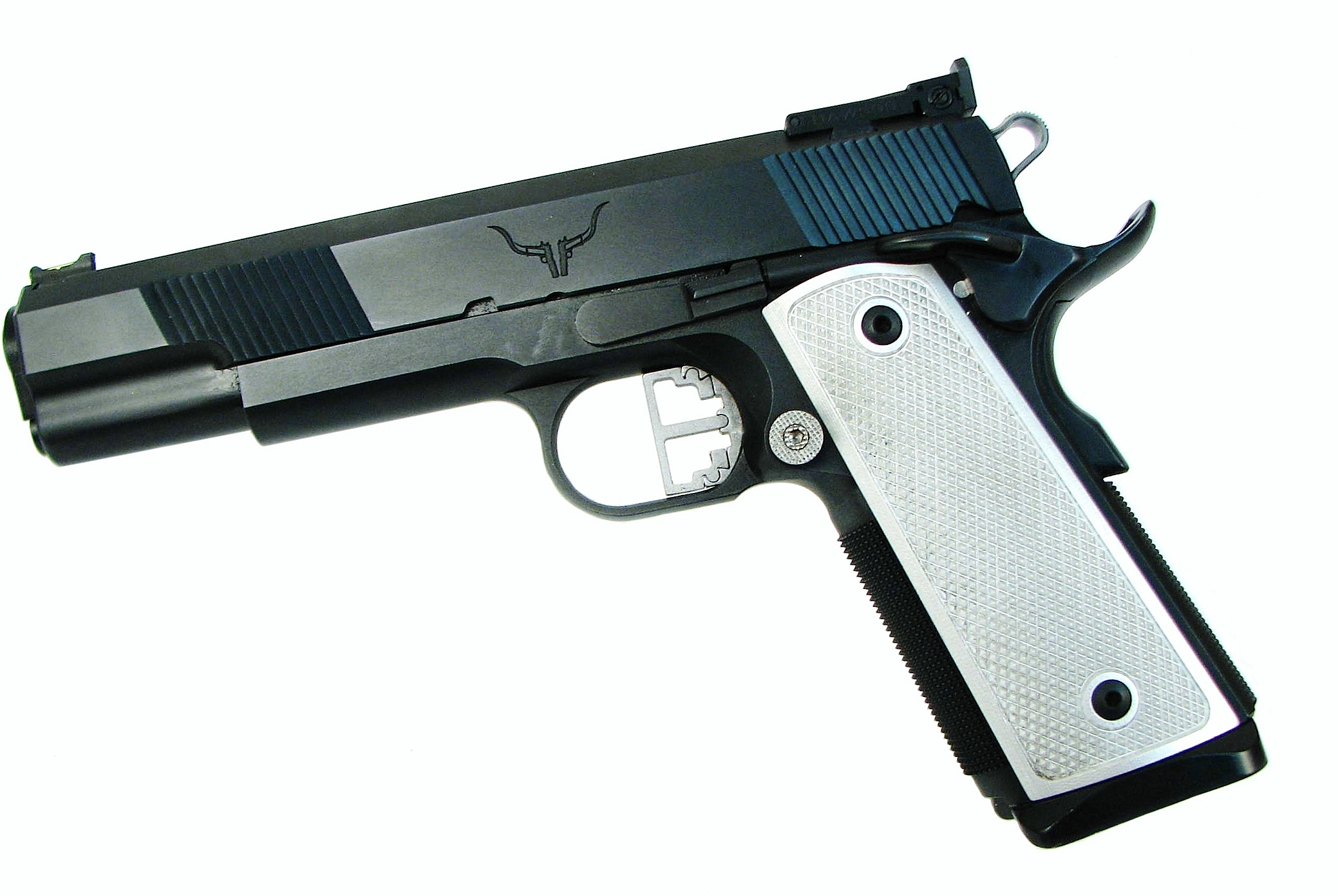 In 2015, I approached Aaron and Ben Hayes of Hayes Custom Guns (https://www.facebook.com/HayesCustomGuns/) about building a fully custom 9mm 1911. I planned to use the pistol to compete in Steel Challenge and USPSA Action Pistol matches. By the end of 2016 I had collected the majority of the parts needed and was ready to get a custom build started. I met with Aaron and Ben of Hayes Custom Guns to drop off the parts and discuss the gun specifications in detail. 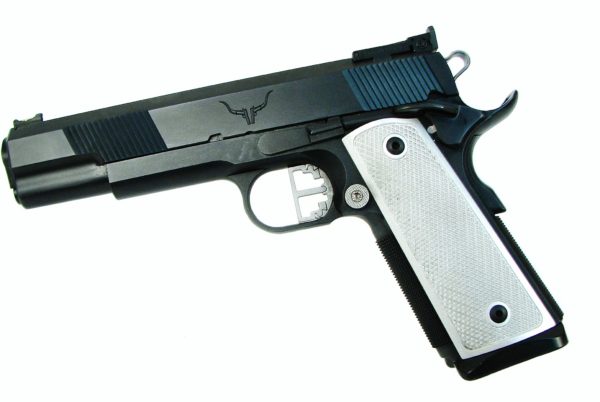 We spoke at length about the build. I explained that I was planning on shooting 9mm, which would make my power factor in USPSA “minor.” This would cost me points for any paper targets I didn’t score alpha hits on in comparison to competitors shooting “major” power factor, however it was a sacrifice I was willing to make for the advantage of having 10 round mags in my gun versus the 8-9 round mags of 40 and 45 caliber pistols. In addition, with a 9mm and my competition reloads, I could potentially shoot faster and speed up my transitions between targets. 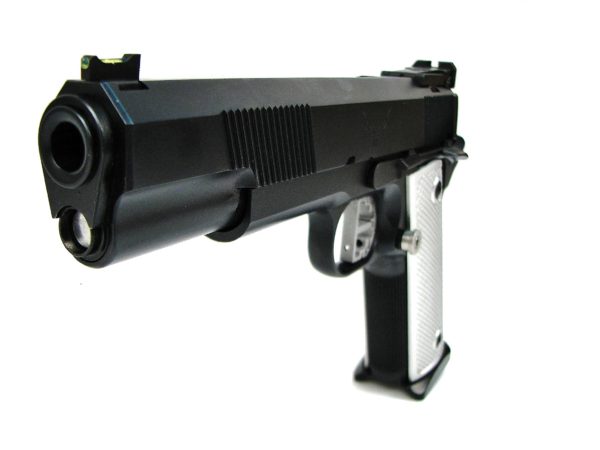 What I wanted in the pistol was to make the slide light to reduce reciprocating mass, with very aggressive front and rear serrations, topped with Dawson Precision competition sights. Tri-topping the slide cut significant mass, while also providing a very clean and modern look. The deep, long and aggressive design of the front and rear serrations also served to cut weight from the slide. The front serrations are what I use the most to work the slide on my pistols; therefore, I wanted them super aggressive to avoid any slipping or missing. Typically the weakest part of 9mm 1911 pistols are their mags, and if one caused a malfunction in the middle of a stage I wanted to be able to work the slide hard and fast to keep the gun running. The serrations Aaron and Ben milled into the slide for me accomplishes that beautifully.

USPSA rules for competing in Single Stack Division state that pistols must weigh no more than 43 ounces with an empty mag inserted into the pistol. Tri-topping and lightening of the slide helped me meet my overall weight goal. At 42.7 ounces, the pistol is just enough under weight. If I change magazine manufacturers, base pads or other small parts, it will still be under the required weight. 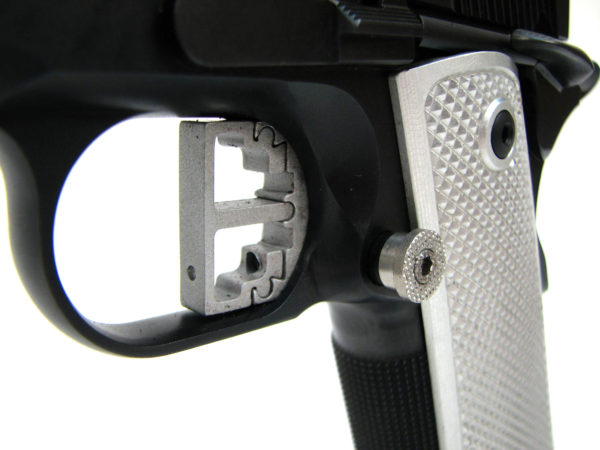 The barrel and bushing for the pistol are from Clark Customs. Their bushing is of superior design and the lock-up between the barrel, bushing and slide is amazingly tight, and was extremely tight when I received the gun. I thoroughly oiled the pistol and worked the action continuously to help break it in. The pistol started with a frame and the slide that were bare and unfit from Caspian Arms. I had Hayes Custom Guns undercut the trigger guard and checker the front strap very aggressively so that I could get a high grip on the pistol. The front strap checkering also matches the aggressive checking of the grips I used for this build. 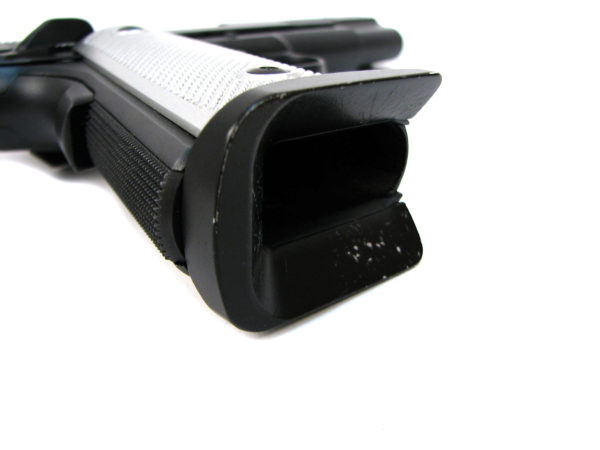 The grips and magwell are from Techwell and integrate together. The grips are slotted at the bottom and the magwell fits tightly into the slots. This allows the shooter to use whatever mainspring housing they prefer. I chose silver aluminum grips with aggressive checkering. The magwell, Techwell’s IPSC TGO version, was seamlessly blended to the frame by Hayes Custom Guns. It was then cerakoted black to match the rest of the pistol. Unfortunately, I didn’t take pictures of it prior to taking my new pistol straight to a local match, where I promptly began wearing the magwell in. Hayes finished the gun with Black Nitride and the finish looks just as smooth and dark as when I first received the pistol. The Black Nitride appears to be very resistant to scratches and wear. 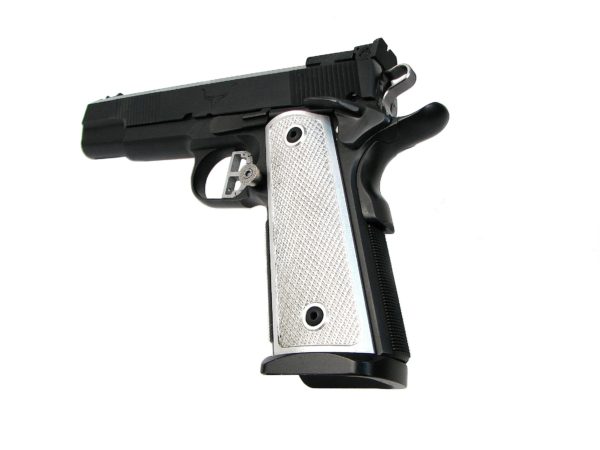 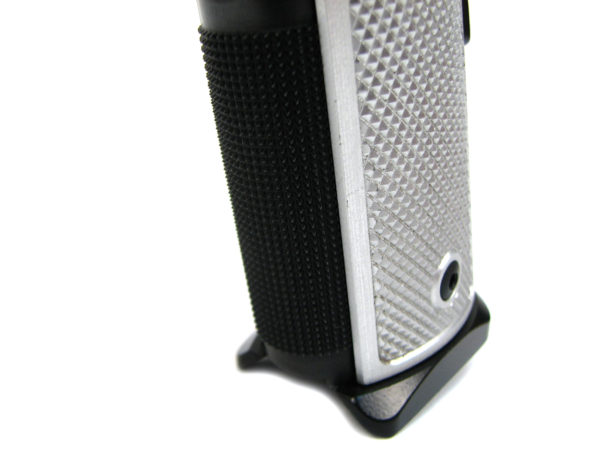 Internally, I had Hayes Custom Guns fit and tune Extreme Engineering trigger components matched to a long flat SV trigger. The trigger is sub 2 pounds with almost no take up and a crisp break and is incredible. Reset on the trigger is short and clean. This, coupled with the minimal recoil and fast-cycling slide make shooting this gun quickly very easy. The safeties are ambi wide Ed Browns and the grip safety is also an Ed Brown memory groove. The mag release is an extended and enlarged Wilson Combat. 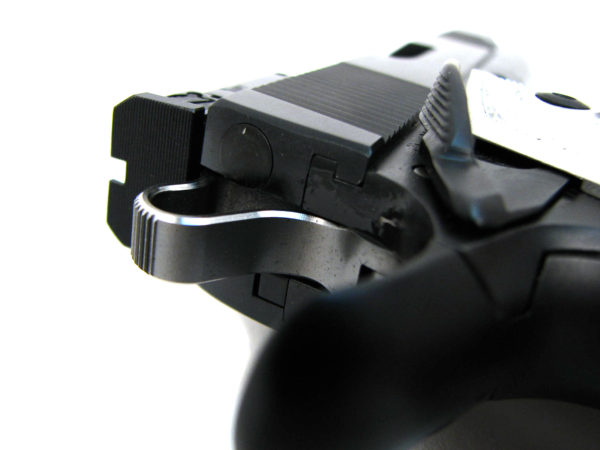 As of this writing I’ve put approximately 2,500 rounds through the pistol. It is amazingly accurate and just a pleasure to shoot. A competitive shooting friend even said it was the finest pistol he’s ever shot. He is no stranger to high-end guns such as those crafted by Hayes Custom Guns. Even after 2,500 rounds the lock up is still incredibly tight and the slide-to-frame fit is perfect. Freestyle I was able to get a sub 3″ group at 25 yards with factory Speer ammo.

The gun is incredible and it won’t be my last custom build by the Hayes brothers. After I crest 5,000 rounds, I will publish a range report that will cover the gun’s accuracy, wear and overall performance. Currently, the gun shoots so flat and light that as fast as I can work the trigger the front sight is already back inside the “A-zone” of a USPSA target. It’s frankly amazing.

Just for fun, here’s a video from a local club’s Hosefest. Take note of how flat the pistol runs with minimal recoil while blazing through the close and open targets.

Special thanks to Aaron and Ben for their fine work and help, my buddies at the Ben Stoeger Pro Shop for the pictures, and Tish and Abby for help editing.

Will is currently an active full-time LEO. Will currently works for his department as a Firearms, Tactics and Defensive Tactics Instructor and is an avid competitive shooter. Most weekends are spent shooting USPSA, Steel Challenge and various other types of action shooting matches. The majority of the time Will competes in Single Stack Division in USPSA, but Will has a strong affection for quality handguns. Will has competed in Single Stack, Production and Limited in USPSA, but also enjoys rifle matches and pretty much anything to do with shooting. USPSA # TY47760

Latest posts by Will Moore (see all)