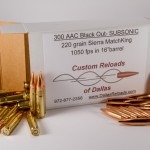 I did a recent project building up a 300 Blackout pistol.  I ran a 11″ Wilson Combat 1/8 twist barrel and needed some good ammo to test the platform with.  I was familiar with the work done by Chad at DallasReloads and gave him a ring.. While I had not personally used any of his ammo I have been paying attention to what he posts and how he interacts with people on the Texashuntingforum.  His advice on handloading has always been spot on and in line with my findings on several cartridges.  He also has bent over backwards helping people out with load data and general advice.  You can tell a lot from someone by their actions.

I ended up getting some of the 208g AMAX and 220g Sierra and have fired them in this build. I chronoed both loads and they stayed subsonic with two different suppressors on them and cycled fine in this rig.  Grouping was around 1″ at 50 yards with an Aimpoint T1 and around 2″ at 100″ yards.  Running a 50 yard zero I could easily bang the 8″ plate in low center by holding to the top of the plate.

Unfortunately, I haven’t had the chance to test terminal performance on a pig with the ammo yet.. I do NOT expect the bullets to expand and would only take precise right behind the ear shots to hit the CNS.

Next up is to test this ammo out of a 14.5 and 16″ barrel.  I expect good results. Be sure to check out their website for more offerings.