Is there anything more fun than hunting hogs at night with suppressed ARs and Thermal imaging scopes? If there is, I haven’t found it yet.

We spent an evening out with the new Trijicon REAP-IR thermal scope on my Wilson Combat 5.56 AR putting the hurt on some pigs..

What we have here is a compact, lightweight state-of-the-art thermal scope.

With it’s 2.5x optical zoom and the ability to increase image size via digital zoom it’s easy to use in the field.  I spent 98% of the time at the lowest power.

The image quality is so good that it’s easy to positively identify animals, i.e., a deer vs a pig at several hundred yards without doing any zoom.  I did zoom in a few times but most of the time I didn’t.

I shot this big boar at about 50 yards with 5.56 75g TAP, it was quartering towards me and I centered the reticle in the head and it took off running, almost right at me and I put another 5-8 rounds as it went by me at 10 ft and stopped about 20 behind me.

Having the scope at 2.5x I was able to track it in the optic with no problem and I think it’s about perfect as is.  If I were to have higher magnification it would have been hard to keep it in the field of view.   It’s easy to scan and ID and engage. 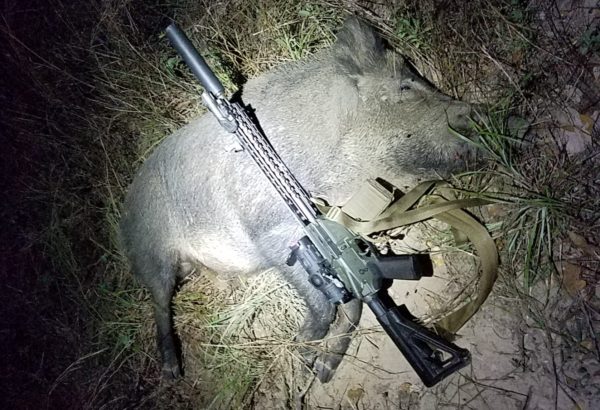 My preferred method is to get out on foot and stalk with the wind in my face to areas where I expect to find hogs.
A lot of times you can get very close, especially if they are munching on some corn from under a feeder or on some we put out earlier with a road feeder.
There were two at this feeder I spotted from several hundred yards away and got within about 40 yards.  I was waiting for them to line their heads up so I could take out two with one shot but the wind was shifting a bit and I didn’t want to get busted.  So I dropped one in it’s tracks with a center headshot (behind ear) and the other took off running, he made it about 10 yards and I swung the rifle through him and pulled the trigger when the center reticle got in front of him.  He flipped in the scope and went down hard.  Walked over and it was a perfect behind the ear shot..  It’s good to be lucky sometimes!  I normally run a 6.8 for hogs but decided to run my 14.5″ Wilson Combat 5.56 to test out the Hornady 5.56 75g TAP SBR ammo.  I would say it worked very well. 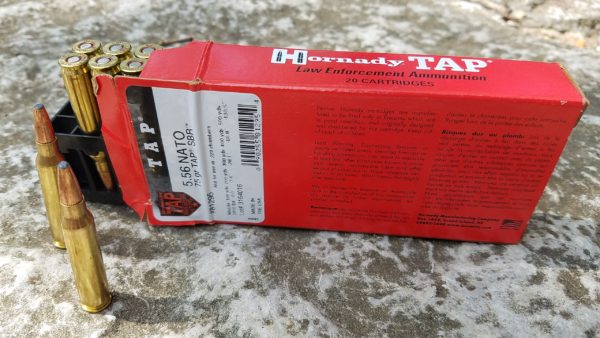 I played around with various settings in the REAP-IR but ended up leaving it in one of the center black hot settings with everything else at the defaults.  Interestingly enough is that you can use a cold water bottle as a target to sight in against a backdrop and it glows white, sort of a reverse polarity thing.  Works great!  Now, if you want really cool IR targets go see my buddy Daniel at www.downrangethermal.com.   The thermal works so well you can actually “see” pretty well at night, trees, etc.. and lastly, you can use it in the daylight no problem whatsoever.. unlike a traditional night vision scope.
We had some more good luck with Jason nailing these.. 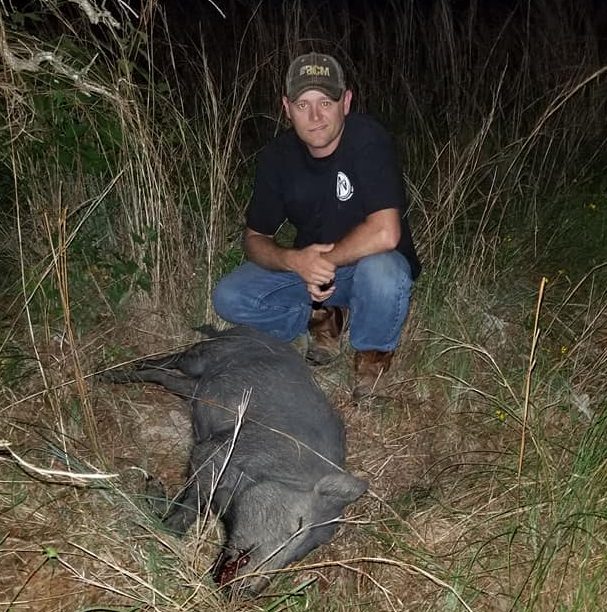 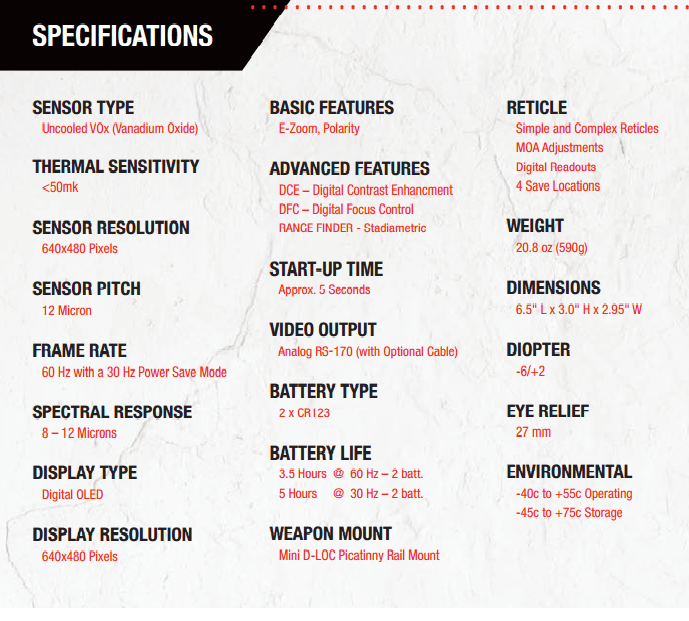 The Trijicon REAP-IR is an amazing unit.  The clarity and resolution are just outstanding.  One thing to make you aware of is the NUC function, this is what calibrates the device to ambient temperatures.  When you first turn it on it might need it a time or two, simply putting the front lense cap back on and using the right hand mounted toggle switch does the trick in a few seconds.  If it needs it, it will tell you and the image may degrade ever so slightly, not enough to mess with the ability to take a shot if needed.  I found myself keeping it off to preserve batteries unless I am in a place where I expect to see hogs and then I will leave it on.  Leaving it on and out in the field I rarely had to “NUC IT”  I personally prefer this over one that does it automatically and losing the ability to use it at the wrong time.  The REAP-IR uses 2 CR123 batteries and I got several hours of use out of a set of them.
There are several different reticle options available, I used the one that had a simple small duplex in the center with German #4  vertical and stradia lines to the side and bottom with a gap between them and the center crosshairs.  There is nothing on the top.  I felt this was the least cluttered and having the horizontal line helps when tracking running targets.
This is a view of the reticle taken with a cell phone.  Note that the internal camera does not capture the reticle in it’s pictures. 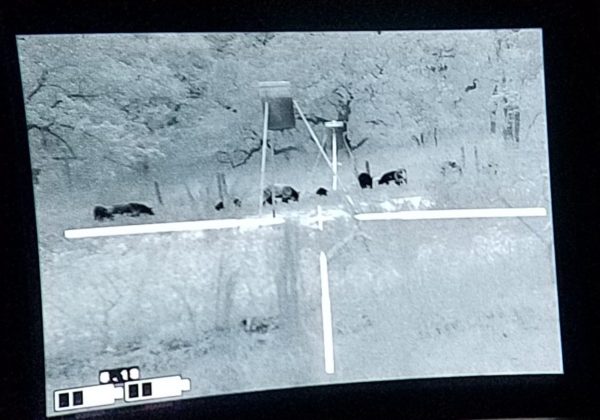 It’s a very simple to operate unit, not overly burdened with complex menu options.  Sight in is very easy.  I put out a cold water bottle at 50 yards laying down so that I am only seeing the bottom, about a 2″ target and bore sighted it.  I removed the BCG on the rifle and centered the barrel on the bottle then moved the crosshairs with the thumbstick to the same target and then fired.  I made a few adjustments, locked the reticle in place and went hunting.  Now, as I mentioned earlier, an even easier way is with the thermal targets from DownRangeThermal.  His targets are in use by military, LE and security forces at Nuclear power plants.  Very cool stuff.  But in a pinch, the water bottle trick works.
Images taken with the REAP-IR’s internal camera. 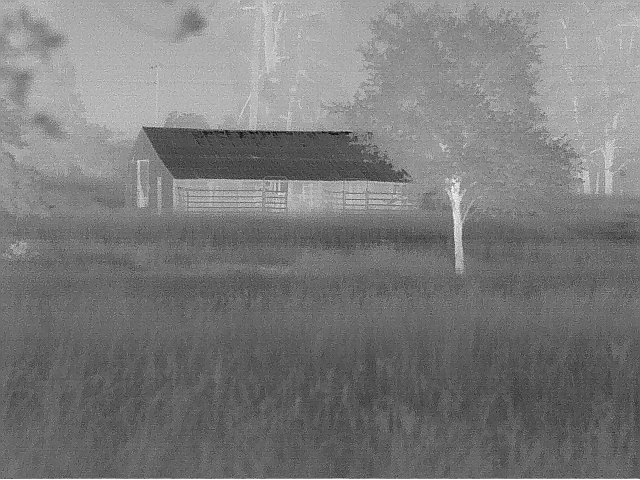 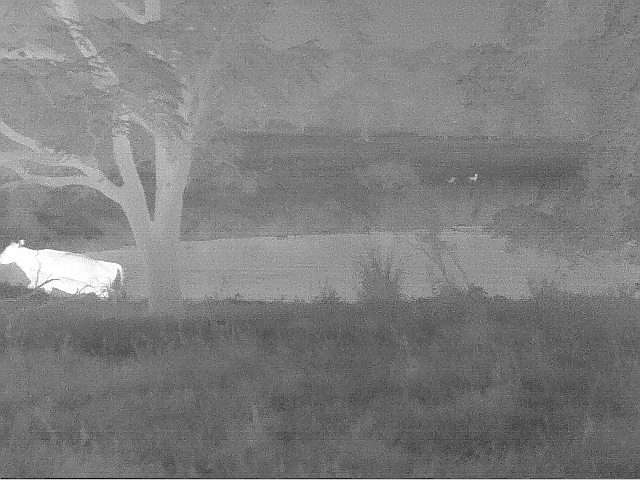 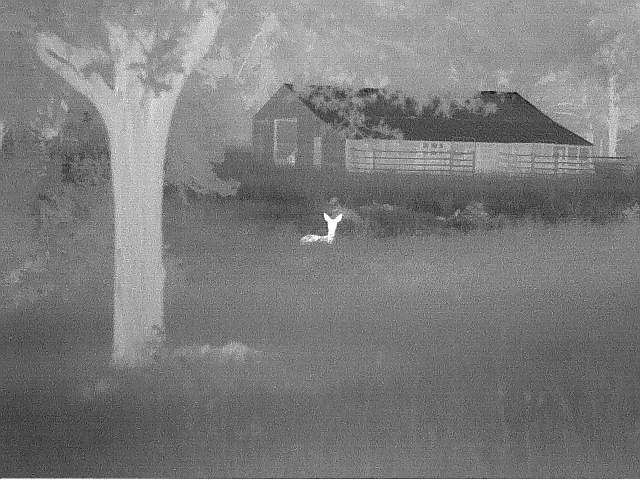 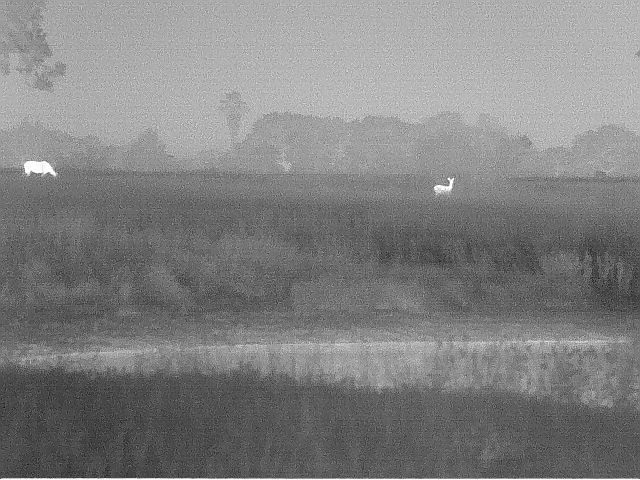 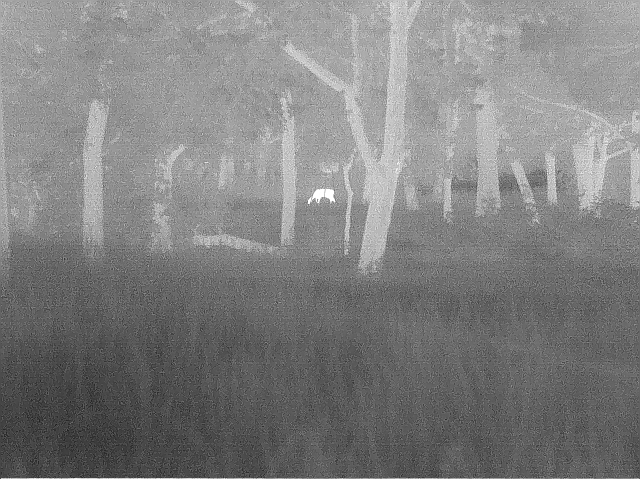 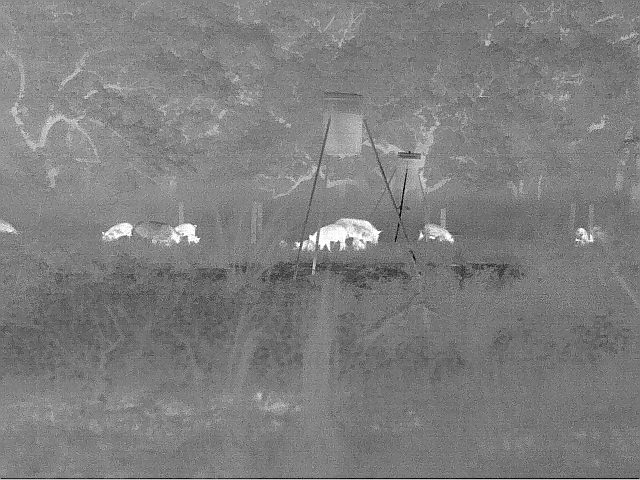 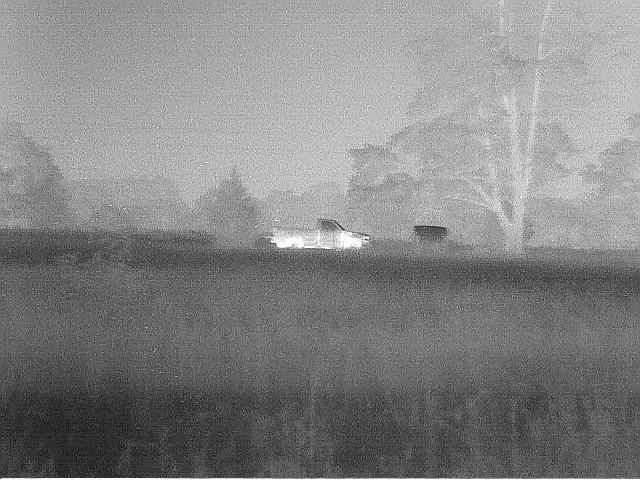 Final thoughts:
The Trijicon REAP-IR is just incredible.  The image clarity and the detail you get is just awesome.  It’s lightweight and compact, about the size of an ACOG.  Not at all big and bulky which means it’s great for getting in and out of vehicles, maneuvering in the field, etc..  The capabilities of a thermal scope over traditional night vision has to be experienced to understand.  NV is awesome of course, but you still have to “see” the game.  If you have hunted a lot you know that animals can just “disappear” in the brush, especially if they are bedded down or aren’t moving or are nestled in the brush.  They can’t hide with good thermal.  You can scan a large field in seconds and detect life.  I have used a similarly priced FLIR 2 years ago wherein you could detect “something” in the field but you had to get a LOT closer to it to be able to determine what it was.  One thing to point out is that Trijicon is using the DLOC mount, these are VERY good and provide a very repeatable return to zero.  I had the optic off the rifle for scanning and it’s very easy to put back on the gun for shooting and as long as you put it in the same spot, press forward and get close to the same amount of torque on the knob you should be good to go.  I have used one of these mounts for a scope on my 6.8 for several years and trust it.
Highly recommended
If you go out and use this and don’t giggle out loud the first time you use it you need to check into the hospital, check that, proceed straight to the morgue because you are obviously already dead!
For more info:
http://www.trijiconeo.com/products/reap-ir/
The following two tabs change content below.