The Trijicon IR-Hunter is one of four products released by the new Trijicon Electro Optics Division formed after their acquisition of IR Defense Corporation.  These include the IR-Hunter and REAP-IR thermal riflescopes, the IR-Patrol thermal monocular, and the SNIPE-IR thermal clip-on.  Tactical Gun Review was fortunate enough to receive the first IR-Hunter to hit the field.  The specific model reviewed is the IR-Hunter MK3 60MM. 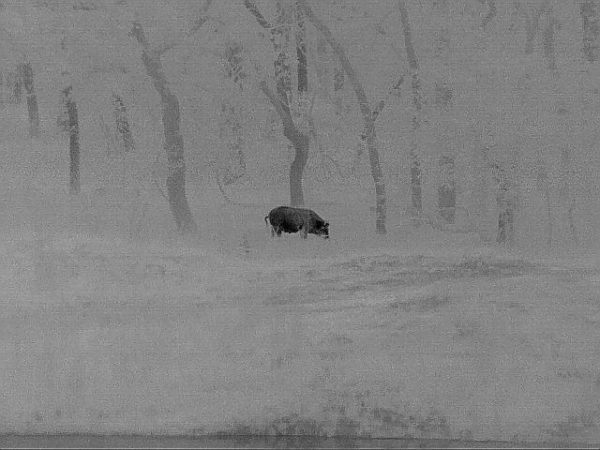 What is in the box.

As you would expect from Trijicon, the IR-HUNTER is shipped in an attractive and durable hard case to protect your investment. The box opens with two trigger-latches on either side.  There is a nice carry handle.  Inside the box you will find: 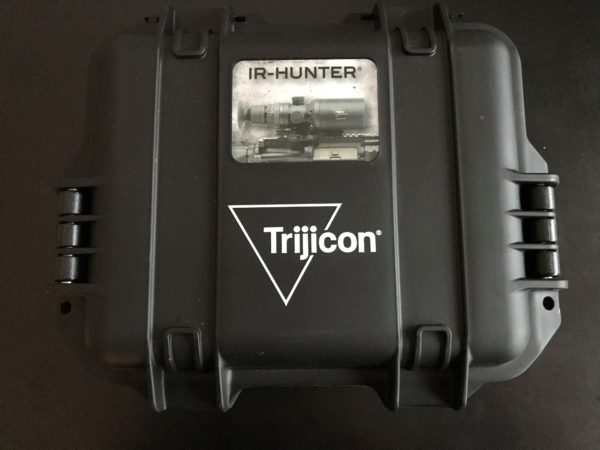 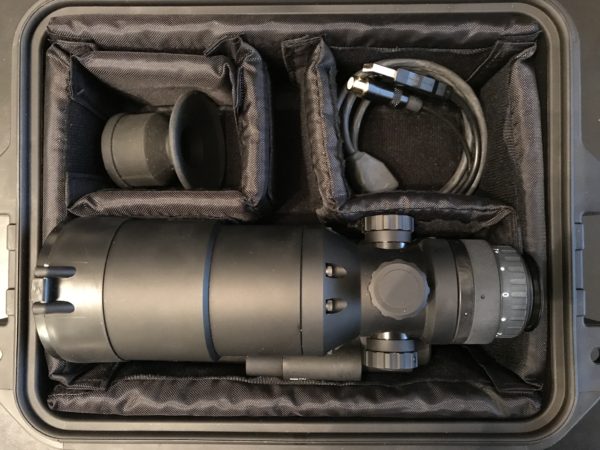 The first thing to notice is the high-quality build.  Having some limited experience with IR Defense, and Trijicon’s reputation, this was as expected.

As I went to install the thermal riflescope on my LMT AR-10, I was pleased to see the LaRue dual lever mount.  I had to mount the scope about as far to the rear as possible to get the proper eye relief.

Small details – like the dust cover over the interface port being tethered so you don’t lose it – are important, especially in gear meant to be used in the dark.  A Butler Creek flip-up scope cover is included.

There are a number of different reticles to choose from.  Simply dial them up from the menu. 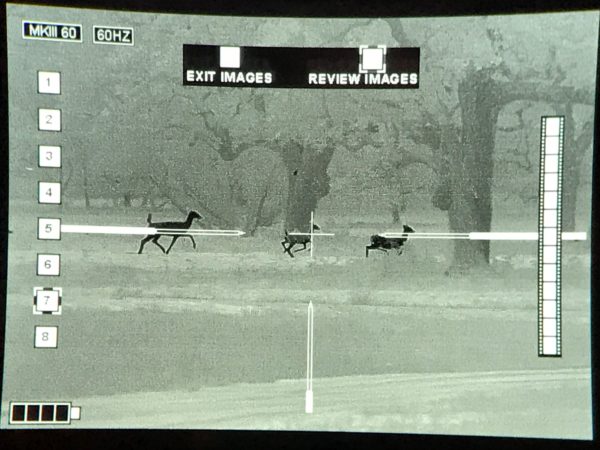 You might be surprised to learn that thermal optics function just fine in daylight.  Lacking any of the special thermal targets, we improvised by using a cold water bottle to sight in the scope.  Although not super-precise, our mission for that first weekend was to stalk up on wild Texas hogs in the middle of the night for close-range shots.  Fine-tuning could come later. 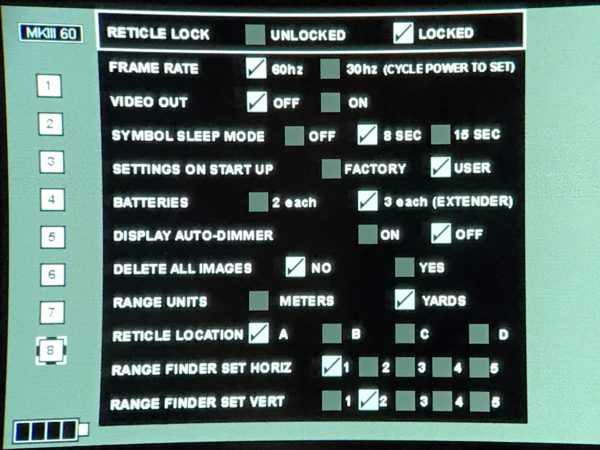 The IR-HUNTER doesn’t have all of the crazy color palettes you might find in some competing thermals.  But really, all of the “rain” and other palettes seem like gimmicks.  One cool option in the Trijicon is Edge Detect.  This is marketed as a tactical mode because it doesn’t reflect nearly as much light back into your eye.  Anyone who has used a thermal understands how this could be useful.

Images can be manipulated by changing the color palette at any time even after the fact.  Let’s say you took a camera photo while the palette was on white hot.  You can change the palette to black hot and download both versions. 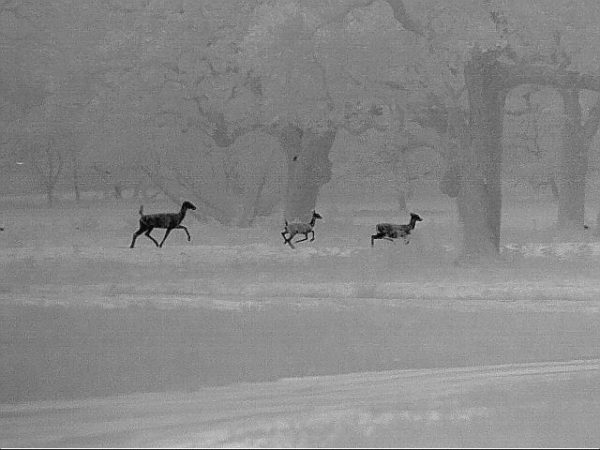 Deer as seen through Trijicon IR-HUNTER 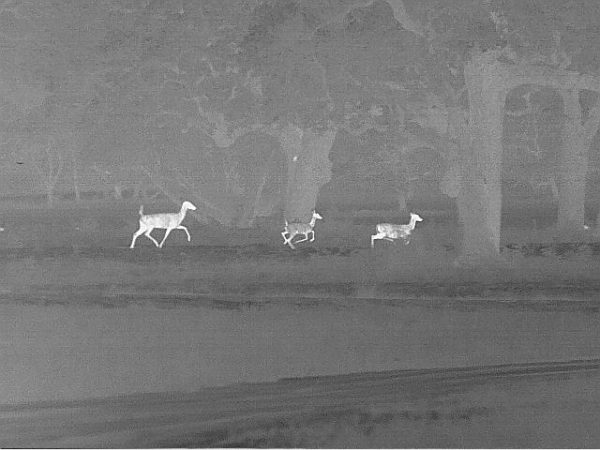 Something that confused us at first is that the elevation and windage turrets are reversed from a typical scope.  The top turret controls windage and the right turret controls elevation.  And they are not marked as to Up/Down and Right/Left.  We had to break out the Quick Reference Guide but then quickly had zero.

Although it doesn’t happen too often, the device does require the occasional re-calibration.  You may notice a deterioration of image or the “Sensor needs NUC please calibrate” message onscreen.  At first this is an annoyance but it doesn’t take long before you learn to do it quickly without even thinking about the procedure (i.e. close lens cover, three clicks down with left dial, one click with top dial, done). 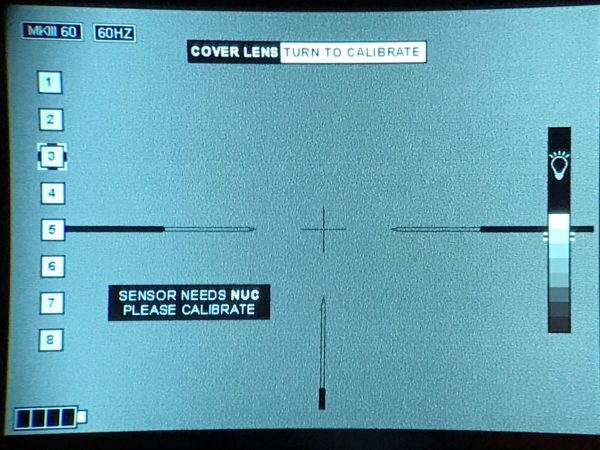 First, I must thank Trijicon (Susan, you know we love you) for shipping the IR-HUNTER out overnight in time for us to take on our hunting trip to South Texas.  Our guest for the weekend was NRA board member and director of the NFA Freedom Alliance Todd Rathner and we really wanted to get him on a night vision hog hunt.

For our first hunt, we baited a number of areas with corn (legal in Texas) during the afternoon and then waited for dusk.  We piled into the Jeep at dark and headed out.  It didn’t take long.  We pulled up quietly at the intersection of a pipeline and seismic line and easily spotted a big boar about 400+ yards down the road with the Trijicon IR-HUNTER.  The wind was in our favor.  Todd got out and slowly moved down the seismic line.  He kept getting closer and closer, then even closer still.  Shoot already!  When he finally squeezed the trigger he was only about 30-40 yards away from this magnificent beast!

Determining distance can be a challenge when using a night vision device.  Todd thought he was still 100 yards out and was shocked to learn he had closed to within 30 yards.  The thermal has a range finder system built in but we did not have time to play with this feature before returning the unit. 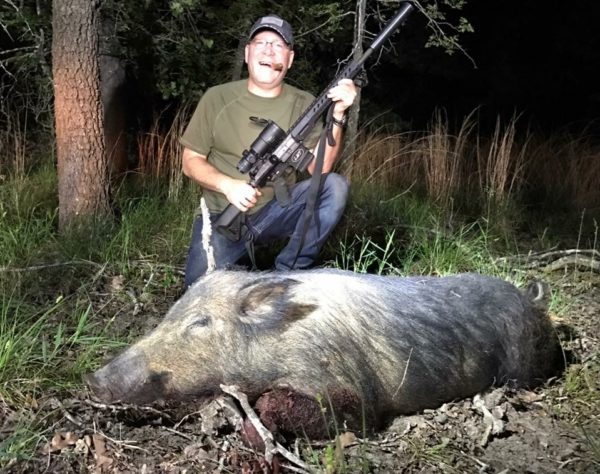 For the second hunt, we again baited several areas of corn but these were intended as back-up spots.  I was pretty confident that we could bust a hog over a stock tank that we call “pig tank.”  We got into the blind before sunset and waited.  Nothing.  We did spot a number of raccoons and armadillos through the scope but no pigs.  Finally, I spotted one coming through the trees – but only because I had thermal!  It started off as a small white light (color palette was on “white hot”) way back in the trees.  The night was so dark you couldn’t see your hand in front of your face but the hog just “popped” in the thermal scope.  They run cattle on the ranch so I waited until I was sure it was indeed a hog and not a black Angus calf before I handed the rifle to Todd saying, “Big hog, 100 yards out, 12:00, take it!” 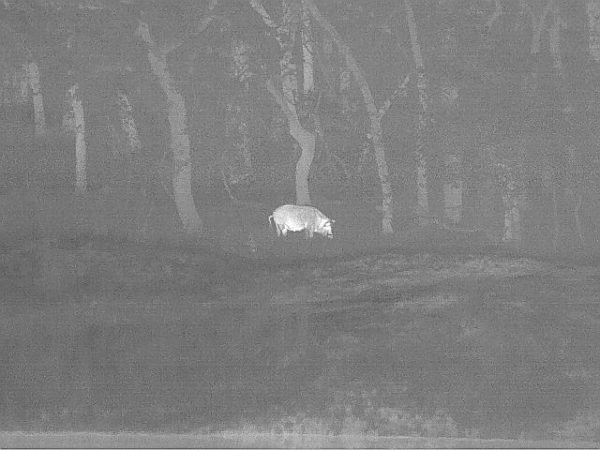 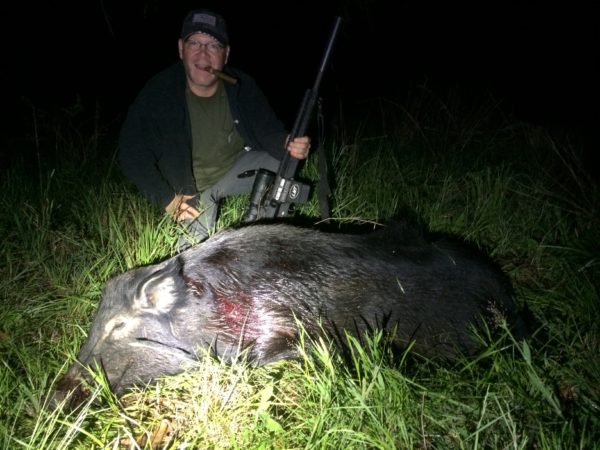 The Trijicon IR-HUNTER MK3 is a very high quality, full-featured thermal riflescope.  At an MSRP of $8,999 it isn’t for everyone.  However, thermal (and night vision in general) is one area where you get what you pay for. 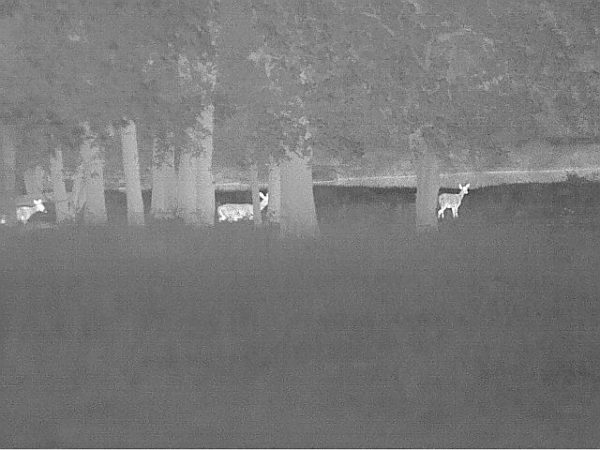 We look forward to reviewing the other Trijicon Electro Optics thermals as they become available.

Publisher at Tactical Gun Review
Publisher of Tactical Gun Review. Managing partner of Coker Tactical. I love hunting for Texas whitetail deer, wild hogs, and high-volume Argentina dove. When not hunting you can find me fishing along the Texas Coast or on a wild Colorado river.