Hunting with a Suppressor 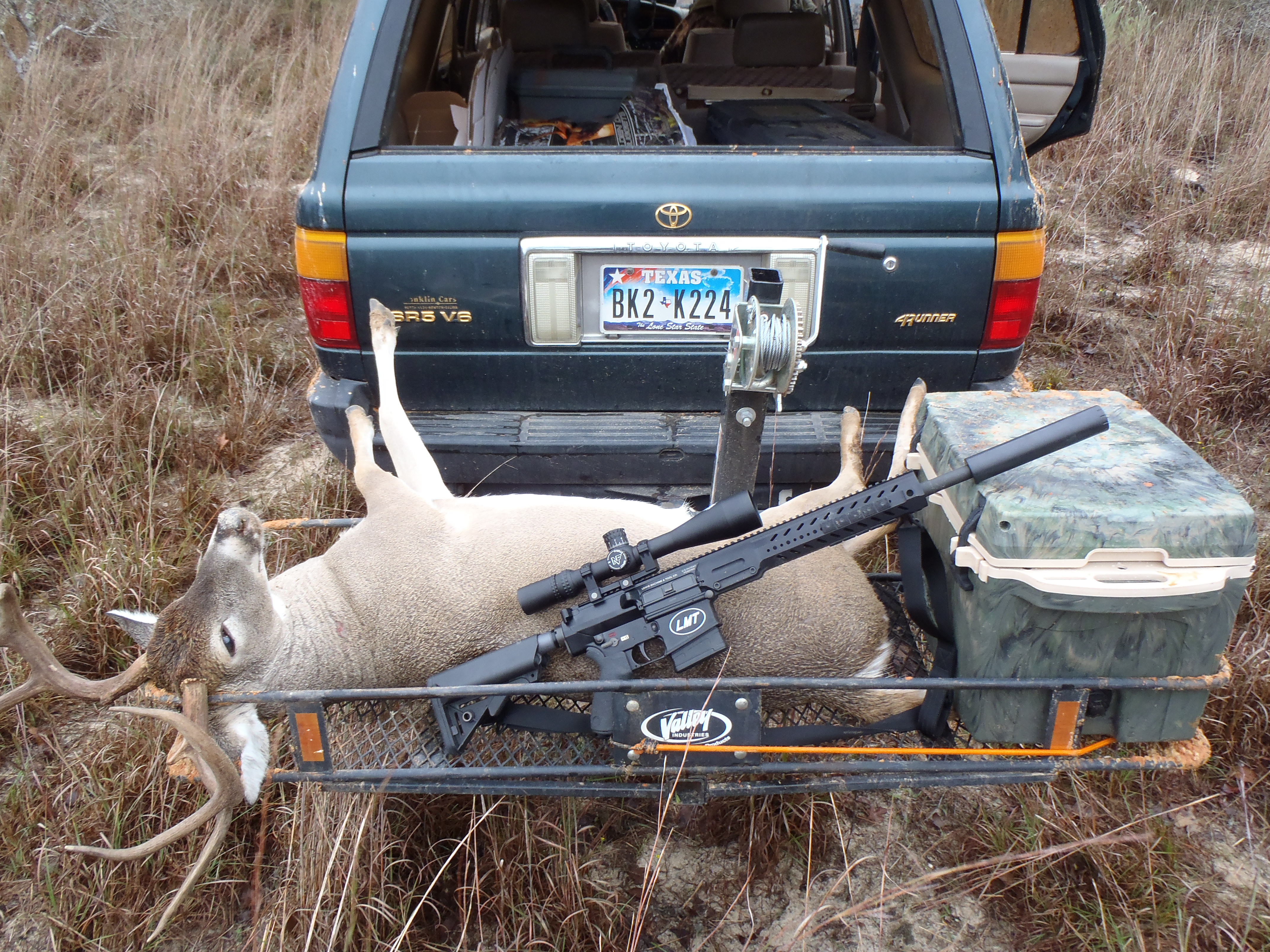 On September 1, 2012 it became legal to hunt game animals with a suppressor in Texas.  Thanks to the tireless work of the American Suppressor Association and the National Rifle Association more states are allowing suppressors to be used while hunting.  It is critical that you validate your own state’s regulations before going into the field to hunt with a silencer.

Let’s get something out of the way.  Either term is acceptable and anyone who corrects you for using the “wrong” word is an idiot.  This usually occurs when someone says “silencer” and a mall-ninja jumps in with the snarky statement, “They are suppressors, not silencers.  They only suppress the sound, not totally silence it.”  Tell this fool to go read an ATF Form 4:

Advantages of hunting with a suppressor. 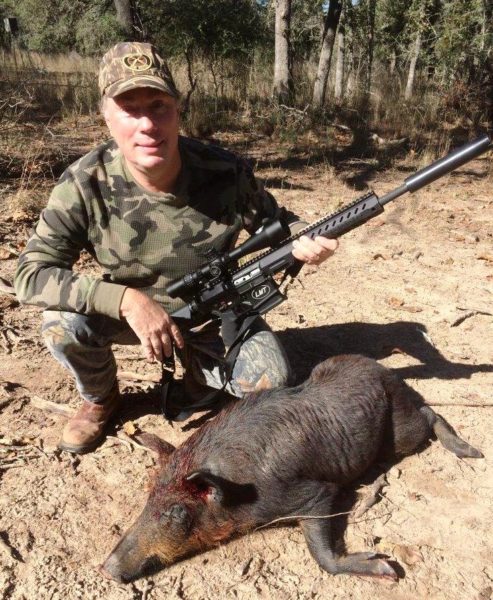 The advantages to hunting with a suppressor are many.  First and foremost, a silencer will protect your hearing.  Most of us do not wear hearing protection while hunting big-game.  The muzzle blast from a high power centerfire rifle is capable of damaging your hearing with a single shot.  A silencer will reduce decibel readings by about 25 -30 db.  Consult the specs – both the manufacturer’s claims and real world testing.

This is not only advantageous for the shooter but for anyone else in the blind.  Take your child hunting?  A suppressor is an investment in their long-term health.

The typical deer hunt involves only one shot (if you practice disciplined shot placement).  However, hunting wild hogs can be considerably more active.  You can run through quite a few shots chasing hogs around the ranch all weekend.  A suppressor makes that chase much more enjoyable.

Fellow hunters will appreciate your use of a suppressor.  A suppressed shot doesn’t rock the woods like the loud crack you normally experience.  Game may not be quite as spooked by a nearby shot.

At times, you can really hear the “whack” of bullet hitting target without the sonic blast of an unsuppressed weapon.

And finally, a suppressor reduces felt recoil.  This will allow you to more easily watch which direction your quarry ran, get off a clean follow up shot, or move to a secondary target.  This is especially true for new shooters who may tend to “flinch” anticipating the shot.  The reduced recoil and reduced sound levels make for a much more pleasant experience. 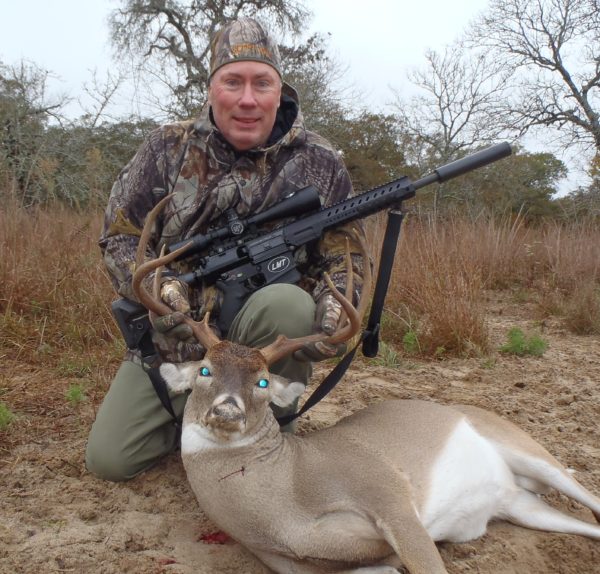 Deer hunting with a silencer

There is really only one disadvantage I can think of – a suppressor adds 6″ – 9″ of length to your rifle.   Many of us offset this by hunting with an SBR or a 16″ barrel.  Of course, you lose some velocity so there is a tradeoff.  If I am hunting tight quarters I will use my 6.8 SPC with a 11.3″ Wilson Combat barrel and suppressor.  That is a great rig for chasing pigs or for shots under 200 yards.  However, if you are carrying a rifle with a 20″ – 24″ barrel then adding another 7.5″ makes it a bit awkward to manage.

First, although the sound is muffled it is still audible.  The woods are very quiet.  Even a suppressed rifle shot can be heard at a significant distance.  This isn’t Hollywood.

Second, I have read countless articles that indicate that a suppressed shot is difficult to pinpoint location.  That may be true in the fog of war but personally I have not noticed that while hunting.  On our hunting lease, quite a few of us hunt with suppressors.  I don’t seem to have any difficulty in determining the direction of the shot.  True, the sound of a suppressed shot doesn’t carry quite as far and maybe this is what people mean with these claims.  My real world experience is that if I can hear the shot I can tell where it is coming from.

These two concepts are what lead people to believe that they can just sit there and pick off an entire sounder of pigs – because the pigs don’t hear the shots and wouldn’t know where it is coming from even if they did.  It is also the source of some anxiety about poachers being able to whack deer without being caught.

I have not mentioned hunting with subsonic loads.  That is a different story altogether.  Hunting with subs is a different experience.  It is super-cool and spooky-quiet.  Many people do hunt with subs, especially when going after hogs as you can often get quite close if you stealthily stalk into the wind.  My general observations:

All of that is subject to cartridge, bullet, load, rifle, and way too many variables to discuss here. 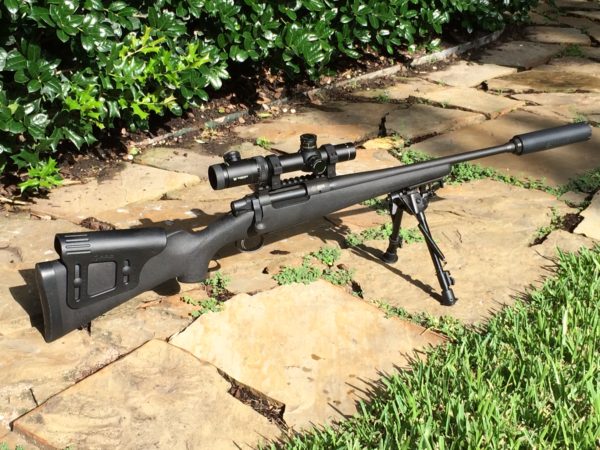 A suppressed AR-15 is the perfect rig for youngsters.  The adjustable buttstock means the rifle can fit almost anyone.  Further, as the hunter grows rapidly through their teen years they can keep using the same rifle and scope by simply changing the stock position.  A suppressed AR-15 is quiet with very little recoil – perfect for newbies.  And with the variety of options available today you are not limited to the .223 round.

Recommendations for hunting with a suppressor.

The Silencer Shop has a very cool system in place that will walk you through the process.

If your goal is high-volume hog hunting then get the best suppressor you can afford.  Read through our suppressor reviews to help decide which is right for you. 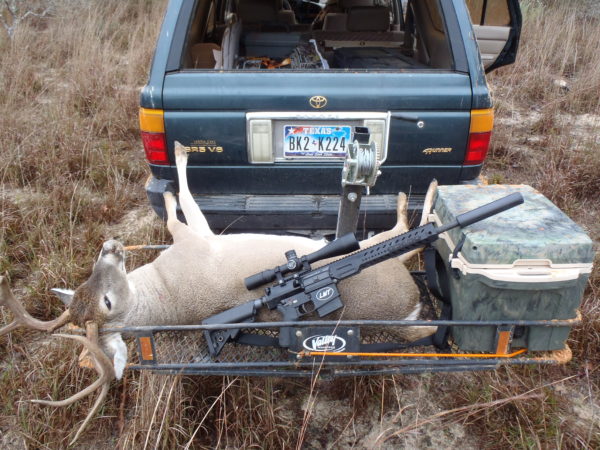 MSR and silencer at home on the ranch