A flashlight of solid construction, high output, and impressive value; the Fenix TK15 does not disappoint, working  when you depend on it most.  The brand may not be very well known, but they have great potential from what I have seen so far.


The TK15 is comfortable in the hand and is very reliable in any condition. It beats out any competition when it comes to a low cost, high quality flashlight. It can be used as a weapon light, camping flashlight, or a day-to-day light; making it highly useful in almost any situation. I have beaten the TK15 around for months now and it hasn’t failed me yet

The construction of the TK15 is aluminum with a rubber push cap at the back. I think the most interesting thing Fenix did was add a ‘plus’ looking ring in between the push cap and the metal body. From what I have seen so far, the reason for this is so that it doesn’t get knocked out of your hands or dropped easily. Another interesting feature was the surface mount LED. This is stronger and more effective than traditional light bulbs. This is a great feature for those who hate replacing bulbs.

For those who want to mount the TK15 on a gun mount, no worries, the ring and pocket clip are easily removable. That is what I did to mount it to my Elzetta ZHF-1500. I have noticed no part movement or anything unusual by taking off the ring and mounting it to my AR.

The light on the TK15 is stunningly bright! Ranging from 6 – 400 lumens (Four different power levels), you can throw the light up to 252 meters (820 feet). The TK15 has 4 different power modes: Low, Medium, High, and Turbo. There is also a strobe light that kicks in when you hold down the power select button for 2+ seconds. This forces the light into 400 lumens of rapid, pulsating light. For $80 retail (got it for $60), the light emitted from the device is phenomenal. 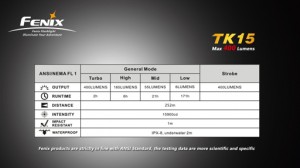 Fenix claims that the Fenix TK15 has a waterproof rating of 1.5 meters or IPX-8. I put it to the test as any curious customer would. The flashlight sat in water 1.5 meter deep for 30 minutes in 40°F . No failure. Then I clicked the mode buttons, banged it around, and turned the light on and off. The TK15 worked flawlessly with no water entering the body or lens of the light even after pushing buttons.

I have to admit that I was skeptical of purchasing a flashlight from a company I have never heard of before, but it seems that you should never judge a book by its cover. The TK 15 is very well-built, operates flawlessly, and is a highly cost-effective flashlight. I will definitely be using Fenix again for all my lighting needs.

More information can be found at: http://www.fenixtactical.com/fenix-tk15.html

Michael is an avid shooter who reviews hunting, survival, and tactical gear for Tactical Gun Review.