ATF proposes to ban all ammunition sales to civilians 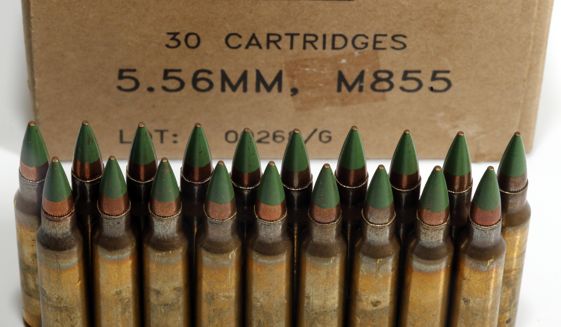 OK folks, this was an April Fool’s Day prank in response to the never-ending bad news out of Washington.  I suggest you check out some of our gun reviews:  Handgun Reviews.  Rifle Reviews.   Optics.

The Bureau of Alcohol, Tobacco, Firearms, and Explosives announced today that all ammunition sales to civilians will be phased out during the next twelve to eighteen months.  Acting Director Scott Turdwalken testified on Capitol Hill yesterday stating, “There is no lawful reason why a civilian should own military-grade weapons.  As the Israeli Mossad have demonstrated, even the “22 Short” can be a lethal round.  It is vital that we take action to prevent the further slaughter of innocent civilians.”  Mr. Turdwalken’s statements echo sentiments he voiced at the United Nations General Assembly earlier this year.

Under the new guidelines, all rifle and pistol ammunition sales will be restricted to law enforcement and military accounts beginning January 1, 2016.  Those individuals who have received formal training in the safe use of firearms, generally believed to be those with a valid concealed carry license, will be allowed to retain most ammunition purchased before the new policy goes into effect in January.  Unlicensed individuals must turn in all privately-owned ammunition to the nearest National Guard Armory at that time (for destruction) or face felony charges.  Ammunition intended to be fired through so-called “shotguns” are rumored to be exempt from the new policy.  In a further clarification of the M855 ban, all ammunition in the 5mm and 6mm families will be restricted to government agencies.

Law enforcement agencies must pass a rigorous DOJ certification to retain lethal capabilities.  Agencies failing to complete the required DOJ training and certification will be restricted to Non-Lethal weapons as endorsed by the U.S. Department of Defense.  Outgoing Attorney General Eric Holder voiced his support for the new certification standards, “Never again shall a promising young man with a bright future be senselessly gunned down in the street.”

Texas Senator Ted Cruz has declared that he will immediately file a bill to de-fund the United Nations if the change in policy is enacted as written.  Senator Cruz declared, “Mr. Turdwalken’s outrageous lies are outrageous, infuriating, and violate the Second Amendment of the US Constitution.”

Hillary Clinton, presumed front-runner for the White House in 2018, voiced support for the ammunition ban.  Ms. Clinton, “For way too many years, we have been oppressed.  We have come too far to back down now.  The people have been heard and the people shall overcome.  I stand with my brothers and sisters to voice my support for this common-sense gun control.”

The proposed policy does include certain exceptions for members of Congress who will be allowed to keep their existing ammunition and be able to buy up to 3,000 rounds per year.  President Barack Obama would like the exemption to also include undocumented immigrants as they, “come out from the shadows.”  President Obama went on to explain, “Undocumented immigrants face unique challenges on their road across the southern border and into our neighborhoods.  They can’t be expected to make this dangerous journey with no protection, no way to defend themselves from rapists, drug smugglers, and aggressive border patrol agents.”

As pursuant to the recent Supreme Court decision the ATF is not required to solicit public comment.  Director Turdwalken declared that he has the authority to define how the Second Amendment will be interpreted by the ATF when it comes to matters of public safety.  President Obama confirmed that the White House will use Executive Order to implement the new ammunition ban relying on a broad interpretation of the Affordable Care Act mandate to reduce preventable deaths.

As expected, the National Rifle Association is opposed to the plan to ban all ammunition.  Representative Nancy Pelosi (D-Calif.), isn’t buying it.  “The NRA is about rifles” stated Ms. Pelosi, and “no one is trying to ban rifles.  This is all about the ammunition, the ammunition, no rifles. I just don’t understand what they are upset about.”

Satire:  The use of humor, irony, exaggeration, or ridicule to expose and criticize people’s stupidity or vices, particularly in the context of contemporary politics and other topical issues.  TGR is a strong supporter of the Second Amendment and is troubled by recent events within the ATF.

Tactical Gun Review welcomes Guest Posts from Consumers, Media Members, Gun Writers, and Bloggers. You can add your review through the "Join In" link at the top of the page or through the Contact form. Share your passion today!!!