In previous articles, I’ve examined the cost benefit of shooting 7n6 surplus instead of commercial M855 5.56x45mm. In this follow-up article, we will examine the various characteristics of the 7N6 surplus round that lend themselves to Serious Social Purposes.

Both rounds were evaluated out of 16 inch barrels, as that is the most common option to the civilian rifleman. Both the AR-15 carbine in 5.45 and commercial AK-74 variants use this lengh barrel. There are exceptions, such as civilian versions of the RPK-74 (23.2 inch barrel), 20-inch 5.45 barrels and even some 14.5 inch barrels. However, the vast majority are 16-inch, which is the length we will focus on. 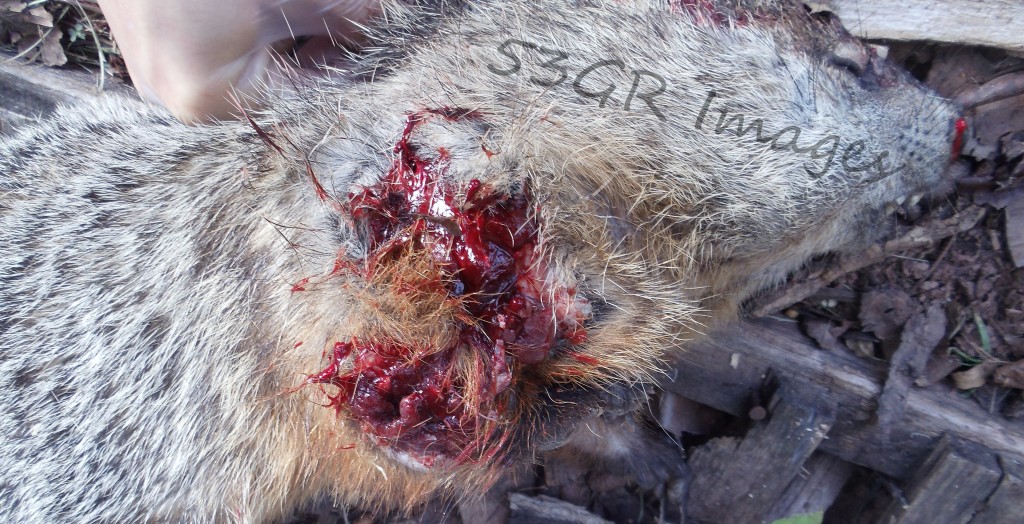 A 7N6 surplus round entered behind the neck, tumbled and came out 90 degrees from how it entered, nearly blowing off the front right leg.

M855 only fragments at high velocities. In fact, according to Texas Small Arms Research, M855 does not fragment below 2500 fps. Unfortunately, this means that not long after 100 yards, M855 loses its most effective method of wounding. While the M855 gets its lethality from fragmentation, the 7N6 does damage by tumbling inside the target.  This is due to the bullet’s interesting construction. Designed at a time when the prevailing wisdom was that cavitation caused significant wounding damage, the Soviet engineers focused on creating a round that tumbles after striking flesh. 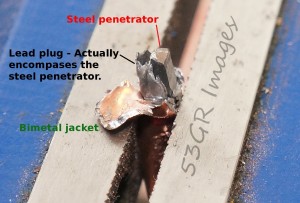 To achieve this, they combined several factors. The 7n6 bullet is lightweight, only 53 grains. It’s 1.06 inches in length, a bit longer than the M855, which measures only 0.9 inches. While the M855 has a 11 grain steel cone in the tip, the 7N6 has a 22-grain steel penetrator in the body and a lead plug in the base of the boat-tailed round. More importantly, the 7N6 bullet incorporates an air pocket inside the tip. This, combined with the lead plug at the base and the extended length of the bullet, results in a very unstable projectile.

The relatively tight twist rate of the barrel (1 in 8 twist for a 53gr projectile) takes care of the round in flight. However when it strikes a solid object, the inherent instability results in impressive yawing characteristics.The tumbling of the round produces a sizable kinetic energy dump. According to Brass Fetcher, the 7N6 round begins tumbling 2.5 inches into ballistic gelatin. Though this is not as impressive as fragmenting M855, it’s important to note that the 7N6 tumbles at lower velocities. Another interesting fact about the 7N6 cartridge is that its velocity is less dependent on barrel length than the M855.

So a 42% increase in barrel length nets a scant 8.6% increase in velocity. This cartridge is capable of producing impressive wound channels, disrupting soft tissue at relatively short ranges.

Moment after impact. The 7N6 surplus round entered the thawed turkey and blew bits of flesh out as it exited. This flesh can be seen in mid air.

At 300 yards, the 5.45 round travels less than 2105 feet per second, which is less than 78% of the velocity required for M855 to fragment. It tumbles reliably in soft tissue (thawed poultry). The JBM trajectory calculator estimated the M855’s velocity at 300 yards to be 2128 feet per second. This is borne out by Knights Armament Company’s Bullet Flight App, which states that the M855 round has a velocity of 2035 feet per second if fired from an M4 (14.5 inch barrel). The slightly lower velocity is to be expected with an inch and a half shorter barrel.

Both the M855 and the 7N6 travel at roughly the same velocity out at 300 yards. While the M855 has greater energy with which to strike the target, it does not fragment reliably. The 7N6, on the other hand, tumbles easily. It retains its primary method of wounding, even at longer ranges. The majority of modern combat engagements occur at less than 100 yards, especially in urban combat. Longer range engagements have made a comeback, especially in Afghanistan, where our troops reportedly regularly engage targets in excess of 500 meters. Interestingly, both the M855 and 7N6 are in use in Afghanistan. In fact, Soviet troops used the 5.45x39mm cartridge in their conflict in Afghanistan from 1979-1989. And while the Civilian Rifleman can reasonably expect to engage most hostile targets within this range, it is not at all a surety. The edge that the 7N6 surplus round gives the shooter at ranges beyond 100 yards is not to be discounted.

As shown in previous articles, Ballistic Advantage barrels are capable of producing some impressive accuracy, even with cheap 7N6 surplus. In the video below, I’m using a 14.5″ mid-length lightweight profile barrel. The optic is a Trijicon SRS which provides no magnification. The results speak for themselves:

Bullet resistant vests have become more commonly used by militaries, LE agencies, terrorist groups and even common criminals.  What happens if your target is wearing armor? We’ve already shown that the 7N6 is not capable of piercing level III steel plate armor. However, most modern rifle rounds are capable of defeating soft Kevlar. But what about a target at longer range that’s wearing body armor? We tested the 7N6 surplus round’s ability to pierce Kevlar at 300 yards and still inflict damage on the target. We found that the 7N6 was easily able to pierce both sides (pass completely through) a Kevlar