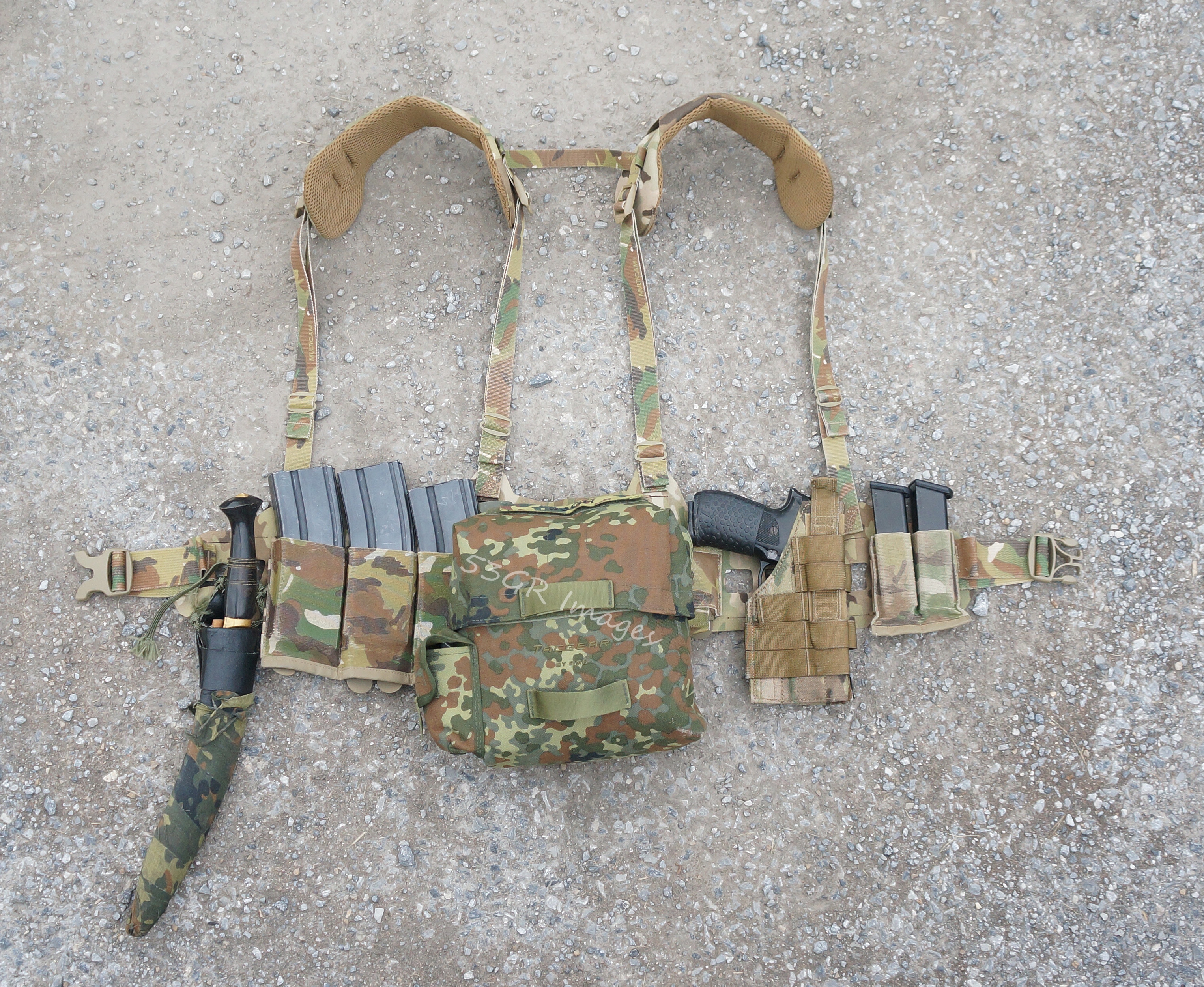 As I spend more time carrying my gear in the woods, I find myself drawn to a belt-and-suspenders type of setup. There’s a place for chest rigs, but bulging pouches stuffed with magazines (and everything else under the sun) can be a drag. The weight slows you down, saps your strength and reminds you how out of shape you are. Lots of gear on your chest can also press in on your rib cage, making labored breathing on the trail more difficult.

After using Blue Force Gear’s Ten-Speed M4 Chest Rig, I went looking for a similarly lightweight belt and suspenders set. The real impetus behind my search was the urging of my brother and our mutual friend, both with considerably more hiking and outdoors experience than I have. My baby brother (who is a full head taller than I) hiked the AT as a kid and continues as an adult. It’s one of his passions. 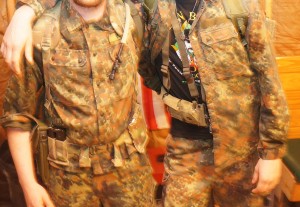 A poorly lit photograph showing the BELTminus next to WWII-era LCE. This was early on in the testing. Notice the M-12 holster.

Our friend Rufus (a nom de guerre) is a former 10th Cav vet. Both he and my brother prefer an old ALICE belt-and-suspender setup, though Rufus had a WWII-era belt until I provided him an upgrade to an  Austrian web belt. He only replaced his old M-1923 cartridge belt because the canvas thing was practically falling apart. Both he and my brother always seemed to carry less weight and be more comfortable than I on our outings. I wanted to emulate their lightweight approach and simultaneously be able to have my gears’ weight distributed to my hips rather than hanging on my shoulders.

I looked high and low, considering different “battle belts” and even thought of purchasing an old set of ALICE gear. Then I saw a SHOT Show video preview of the BELTminus by Blue Force Gear. A new take on LBE with webbing that is half the thickness of a dime and weighs less than a butterfly’s fart? Be still my beating heart. The BELTminus embodies the term lightweight. It’s a grand total of 9 ounces, which makes it less than half the weight of BFG’s SOC-C Modular Padded Belt System. The old LC-2 suspenders alone weighed 8oz.

During my evaluation, I placed the BFG gear on my digital scale in order to record the weight. I was rather surprised to see that the weight of the BELTminus with BFG pouches is EXACTLY what the weights listed on their website add up to. It’s right down to the gram. I honestly would have expected some small variation, but the manufacturing process they use (and their quality control) must be impeccable.

The attention to detail this shows is impressive. The BELTminus is made of ULTRAcomp, a proprietary laminate stronger than 1000 Cordura and possessing abrasion resistance four times greater than air textured nylon. BFG claims that it can withstand hard use, but we’ll see if it lives up to the hype later in the article. Ultracomp is fast-drying, which doesn’t seem like a big deal until you get it soaking wet with sweat. Anything that sheds water weight while also helping me keep cool is a winner in my book. 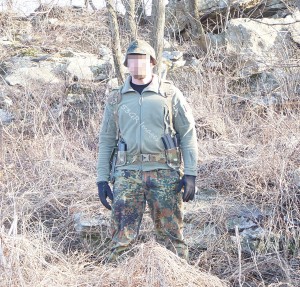 The TAD Ranger Jacket LT and BFG BELTminus out on the Appalachian Trail.

So it’s super lightweight and the QC is incredibly exact. If it doesn’t hold up to idiotic abuse, then it’s just something pretty to show off to the boys at the range. Luckily for BFG, I abuse my equipment idiotically with alarming regularity. But I ease into it. The first thing I did was to go out on my least favorite section of the Appalachian Trail with the BELTminus carrying a medium load. No problems there.

In fact, I was blown away at how natural everything felt. It didn’t really feel like I was wearing LBE at all. I found myself missing the feel of a thick, nylon belt. A few miles later, when I realized that I couldn’t feel the BELTminus digging into my hips or causing me discomfort, the nostalgic pining for an old LC-2 disappeared completely. The next hike took me through heavy brush, often bushwacking with my khukuri. I had no problems with bushes or branches catching on my gear.

The BELTminus hugged my body and distributed my gear’s weight admirably, even when in a full-out run. In an effort to induce failure (I like to break things) in the system, I began adding weight. Though a knife is common to see on a belt rig, I prefer a khukri. Specifically, I carry a Sirupate khukuri when out in the woods. It can serve as a knife, a hatchet and a machete all in one. Naturally, it had to go onto the BELTminus, though the traditional sheath would not attach to MOLLE webbing. I ended up tying it on to the BELTminus using the broken strap of a boonie hat. Not really a good idea. I’ll have to fix that soon. 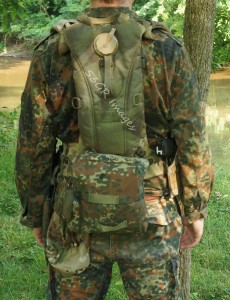 Notice the SIG P226 in the Specter holster on my right hip.

Blue Force Gear was pretty clear that the BELTminus was never intended to handle a pistol holster. In fact, several people tried to dissuade me from mounting a holster. Being pig-headed, I ignored them. Honestly, I understand that the BELTminus is light and easily pliable, but I really didn’t want to add a drop-leg holster to my setup. The whole point of a belt-and-suspenders rig is that you can have your gear all on one system. It’s easy to put on and take off and keeps everything simple. So to hell with wiser heads, I wanted my SIG on my belt.

Initially, I mounted a surplus M-12 holster. Unfortunately, this was set up for an old ALICE belt, not MOLLE. I ended up moving the M-12 back to a web belt I own, where it works very well. Eventually, I went with a modular tactical holster by Specter Gear. Though I’ve had luck with universal holsters, there’s always some slop and wiggle. Not so with Specter. They sew their holsters to specific pistols. More on their holster in an upcoming review.

Blue force Gear markets a configuration of the BELTminus that has pouches for 8 loaded AR-15 magazines, a trauma kit and two utility pouches. Assuming you have water in one utility pouch and heavier, solid items in the other, you’re looking at a load of about 12 pounds. So of course, I loaded mine up with as much weight as I could. When all was said and done, I had three loaded AR magazines, two loaded SIG mags, a Sirupate Khukuri, 100 feet of 550 cord on a Petzl AM’D screw-lock carabiner, and a loaded SIG P226 in a Specter holster. In lieu of the BFG horizontal utility pouch, I attached a much larger Flecktarn gas mask pouch by TacGear. It holds: